Guto Davies explores the Levelling Up White Paper for Planning in London.

huge amount has changed since the Association for Consultancy and Engineering (ACE) published its report on Levelling Up , Five Principles for Success last year. Most recently the cost of living crisis has come to dominate headlines following the conflict in Ukraine.

It was in this environment that the Chancellor delivered his Spring Statement. Rising inflation formed the backdrop to the update with the official forecast from the OBR peaking at around 9% in 2022. The resulting impact – coming after what have been two extremely challenging years – means difficult times ahead for all businesses in all sectors, particularly those that will be supporting the delivery of the Levelling Up agenda. The reality is that levelling up just got a whole lot harder.

In a previous article for Planning in London, I highlighted that the opportunities span further than former industrial communities in the North of England. The agenda is also relevant to many left behind communities across London and the South East where two neighbouring urban communities can sometimes beat both extremes of opportunity. As we enter the latest cycle in the election calendar, the Government knows it can’t pause as voters will start to want to see some results. Since the publication of our report, the Government has released its own White Paper which, according to the Prime Minister, was aimed at outlining “the practical steps” to take.

ACE welcomed the new ‘12 national missions’ as a way to drive activity and ensure spending remains both targeted and on track, but they are nothing without properly structured long-term financing for local government to realise these political ambitions. Our concern was, and still is, that the current approach remains too compartmentalised to be truly effective.

As a very busy policy space, with many organisations vying to have their say on the direction of government thinking, making your voice heard can sometimes be challenging. However, given our industry’s role as the delivery partner of choice for government, it was only natural we focused on delivery.

Our analysis demonstrated a disconnect between political ambitions and delivery on the ground, and ACE highlighted the ways in which our industry is ideally placed to be the delivery partners of choice, helping to plug gaps in local authority provision.

Our concern was, and still is, that the current approach remains too compartmentalised to be truly effective. Guto Davies, ACE

Our recommendations targeted the barriers to making progress in the short and medium term. Most importantly, those recommendations were used to judge to what extent the Levelling Up White Paper would be a success.

As one might expect, funding is clearly an important part of the White Paper. After all, what is ambition without resource? However, as we set out in our report, the Government needs to consolidate funding resources and reduce the use of competition and ringfencing. This is particularly relevant given the Spring Statement announced the launch of the second iteration of the Levelling Up Fund.

The current ambitions around Net Zero and the decarbonisation of our economy provide new opportunities for the Levelling Up agenda. It is vital that government strengthens the link to Net Zero by prioritising the leverage of the existing built environment. To put that into context, 80% or more the buildings and infrastructure of 2050 already exist. Therefore criteria for accessing Levelling Up funding should prioritise the reuse of existing structures over new build. Not only will this make a large contribution to reaching our Net Zero targets, it will also help deliver social outcomes too, breaking the link between a declining built environment, poor mental health, and low productivity.

Our five principles also formed the basis for delivering successful place-based regeneration. Particularly relevant to local authorities bidding for funding, areas need to build a solid evidence base. Levelling Up needs to be based on a robust analysis of local context. This analysis should include an area’s existing buildings and infrastructure, its geography the planned infrastructure investment pipeline for the area, local skill sets, demographic data, and the results of deep engagement with the local community about their needs. 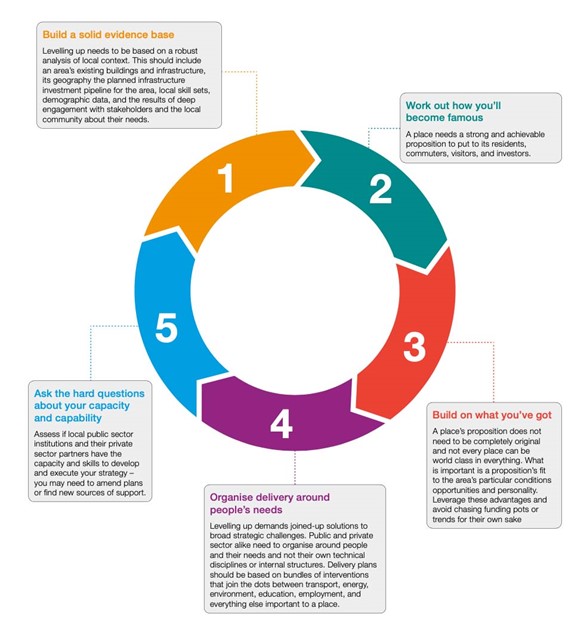 As you will know, London is home to huge amounts of private investment. But there is certainly more to do in many communities. Areas wanting to ‘level up’ need to work out how they will become famous and what their USP is. A place needs a strong and achievable proposition to put to residents, commuters, visitors, and investors.

When local authorities are planning bids, they should do so by remembering the importance of building on what they already have. A proposition does not need to be completely original and not every place can be world class in everything. What is important, however, is a proposition’s which enhances the area’s particular conditions for opportunity and personality. Communities should leverage these advantages and avoid the trap of chasing funding pots or broader trends for their own sake. A failure to do so may mean shorterm funding wins, but a loss of medium to longer-term benefits for the community.

Perhaps the biggest challenge, aside from resource, to levelling up is the scale of challenge in many areas. There’s certainly no ‘silver bullet’, and as such, we need to ensure joined-up solutions. That forms an important part of our fourth principle to organise delivery around people’s needs. Delivery plans should be based on bundles of interventions that join the dots between transport, energy, environment, education, employment, and everything else important to a place.

Finally, the principle of Levelling Up isn’t something new. The fact that many areas have faced these challenges over decades speaks volumes about the challenge. But if the Government is truly serious about delivering real change, it needs to ask and answer difficult questions. That is also relevant to local government in left-behind communities. Do those left behind communities have the capacity and capability to drive change? How can we ensure collaboration between the public and private sector to find new sources of support?

Guto Davies is head of policy at the Association for Consultancy and Engineering (ACE).

This article originally appeared in the April-June 2022 edition of Planning in London.

Guto is head of policy at ACE and sister organisation, EIC.

Levelling up: Five Principles for Success

Turning political ambitions around levelling up into tangible reality.

INWED22: How can men support equality in the workplace?

Wojciech Szewczak explores how men can play their part.

It's time to progress Crossrail 2