INWED22: “FEMALE ROLE MODELS SHOULD BE CELEBRATED AND EMPOWERED”

As we celebrate another International Women in Engineering Day and to coincide with the new ACE ED&I campaign, Building Inclusivity, we convened a panel of ACE’s emerging professionals to explore the progress made towards gender equality, and how we can create an industry which is more attractive to women.

When asked how we could make progress towards gender equality and encourage more women into our workplaces, there was broad agreement among the panellists that reaching out to women both through schools and careers fairs, was a great starting point.

Aya Abdulghaffar, senior ITS consultant at AECOM said: “I believe early interventions through the STEM programmes to go into primary and secondary schools and to see woman already in industry, as well as the diverse workforce is a big motivation for the next generation.”

Kat Brown, social impact and ESG manager at Bruntwood agreed: “Engineering has the potential to be marketed as an exciting career pathway, however this opportunity is often overlooked in education. There should be improved visibility of the opportunities for women in construction from a younger age. This could look like workplace visits in KS1 and career talks in KS2/3.”

Charlotte Jones, a consultant at AECOM and ACE Emerging Professionals vice chair, said: “Career fairs and talks at schools and university should be attended by our women leaders every now and then to really promote how women thrive in this industry and share their personal experiences, which I feel doesn’t happen that often.”

“This would be a really good starting point as we are really big on diversity and the range of degrees you can now have to be in the industry is broadening. Using this to our advantage, we can start to promote roles and really emphasise that they are open to anyone.”

This lack of female role models within businesses was also highlighted as a key factor by others. 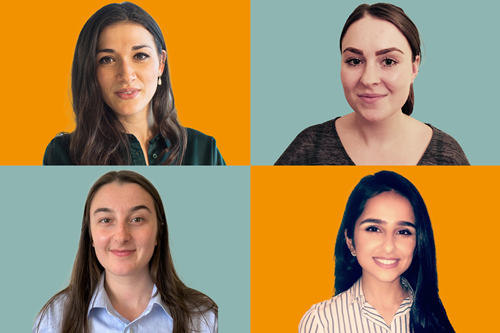 Kat Brown added: “More female role models should be celebrated and empowered to support other women. I believe there is still some stigma remaining around senior females - that they are viewed as “tricky”, “difficult” or “bossy”, when the same language would not be used for males.”

“There is a piece of work that needs to be done around ‘breaking the glass ceiling’ for many mid-career female professionals. An example of this would be to further promote and develop the resources/groups for women to share their experiences and support each other – males should also be welcome!”

Charlotte Jones, added: “I personally don’t see many women in leadership roles throughout the industry which I think discourages us from pushing for higher roles, particularly in larger companies.”

Recent progress on gender has been more positive, however it is clear that more work remains.

Victoria Trudgill, environmental consultant at Atkins, and ACE emerging professional lead in London said: “According to Randstad, women in construction management roles increased by 9% in the UK between 2018 and 2020. However, the proportion of men compared to women in this industry is approximately 10%, so there is still a long way to go!”

She added: “The majority of women in this industry are situated in less senior roles than men, reflected in the 14% of women making up executive positions. The good news is that the majority of these women entered these roles in the last five years, so companies are beginning to promote more women in recent years and we are slowly seeing improvements, but we need more and quicker action.”

In a blog post on ACE’s website, Wojciech Szewczak of Ramboll and chair of ACE’s Emerging Professionals, agrees that men also have a role to play in this conversation as agents of change and gender champions. He also recognises that the emerging leaders are: “one step ahead of business leadership on the issue and are asking the right questions to challenge the status quo and ensure we don’t return to business as usual.”

You now have a further ten days to enter. New deadline: Friday 15 July at 4pm.

INWED22: Celebrating the 'inventors and innovators'

Congratulations to the Top 50 Women in Engineering with winners from AECOM & Arup.