World leaders across the globe need to step up, work together and set the right conditions to win the fight against climate change.

This was the key theme to emerge in Combatting Climate Change Internationally, the first in a brand new autumn series of Infrastructure Intelligence Live webinars today on 24 September 2021, organised in association with events and communications strategic partner, BECG.

The webinar previewed the upcoming COP26 climate conference in Glasgow in November, looking at the international fight to combat climate change and, crucially, the role of the infrastructure industry in that fight.

Zoe Haseman, speaking first at what proved to be an insightful debate, described the need to reset the environmental balance and called for politicians and world leaders to set out a clear vision and plan of action for global collaboration at COP26.

“We’re in the middle of a series of critical events,” said Haseman. “The world needs more innovators and problem solvers who are not afraid to change. There’s just five weeks until COP26 and the clock is ticking. It’s time for world leaders to step up,” she said. 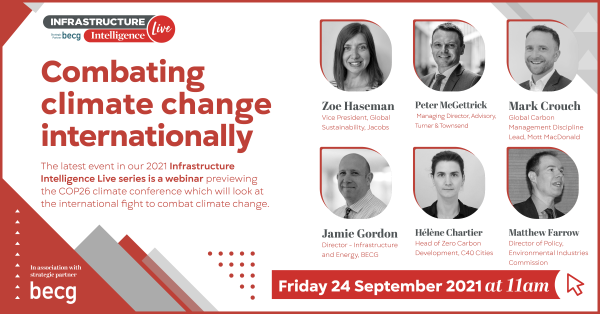 Peter McGettrick said that climate change was the single most important issue facing the world and that infrastructure had a vital role to play in the race to net zero.

“We can all safely agree that infrastructure is critical to tackling climate change,” he said. “It’s time to channel all the goodwill and energy that exists in our industry into positive action. Decarbonising the way we build is critical to tackling climate change. Failure to adapt will only cause extra costs, as well as leaving future communities vulnerable. Success won’t be achieved with one silver bullet – we need a programmed set of change and we need to embed the fight against climate change into everything we do.”

Mark Crouch said that COP26 was essential for setting the conditions for change and collaboration on a global scale. “We could ask whether we’ve done enough in navigating geopolitics, but we’ve recently heard positive signs from the US on finance and China committing to no longer funding coal overseas, so COP26 has hopefully already begun to make a difference. There’s a huge need for global collaboration, working together to achieve change, said Crouch.

Matthew Farrow said the build up to COP 26 felt similar to 2006, when the UK held the EU presidency, with cross party support for progressive climate change policies. But the financial crash in 2008 meant that the subsequent Cop 15 was big disappointment and didn’t lead to the kind of move forward that people expected.

However, the mood around COP26 was positive, at a hugely important time for the world and the industry, he said. “The sector is in a really good position to make a difference. A global industry to meet a global challenge. We need to work collaboratively to make a difference,” said Farrow.

Jamie Gordon agreed with the previous speakers and emphasised that positive action on climate change was needed on a global scale. “The developing world is ripe for renewables,” said Gordon. “But if we look at developing countries, where is climate change realistically going to sit on their agendas? How are policy changes going to be policed? It’s a real challenge,” he said.

Infrastructure Intelligence editor Andy Walker said: “It’s clear that COP26 needs to set out a clear plan of action, with world leaders working together on a global scale to fight climate change. Our industry stands ready to work together and we need to keep up the pressure on those global leaders to ensure that they do the right thing. Now is the time for businesses, industries, world leaders and communities to step up and make change happen.”