The seismic event of the pandemic should be used as a catalyst for positive and progressive change to our cities, says Tim Whiteley of Inevitech.

Over half of us call cities home and according to research from the UN we’re set to have more neighbours with 68% of people living in cities by 2050. It’s easy to understand why. Cities tend to have the jobs, best sources of education and are often the homes of culture.

But Covid-19 has skewed this somewhat. With more time spent locked in our homes (I’m still writing this during lockdown), urban dwellers have begun to reassess their living situation – if I don’t have to commute, why not move to more space in the country? So much so that London’s population is falling for the first time in 30 years, compounded, of course, by other conditions including Brexit.

Having solicited some help from leading names in architecture and urban planning, I’ve set out a number of areas of improvement we can start working towards now that will make our cities better places for citizens in the future.

When the first lockdown hit in the UK, you’ll remember there was a big divide between those with gardens and outside space and those without – but all of us were in the same boat when it came to having to make do with a single allowance of daily exercise. I echo Edward Williams of Edward Williams Architects when he says that 2020 has given us “a wider appreciation of the importance of green spaces”.

And according to the World Health Organisation, urban green spaces are integral to the promotion of both mental and physical health and reduction of morbidity and mortality in urban residents. Unsurprisingly, green spaces are good for the environment as well – helping to cool temperatures and regulate environmental processes such as air, water and noise pollution.

But any steps to create more of them must be done with equity in mind.¬ Christopher Martin co-founder and director of Urban Movement, put it frankly, saying: “The pandemic has shown us the inequalities that exist in cities, especially in terms of access to greenspace as well as access to opportunity… we need to see more of a focus on urban social justice and shaping regenerative places, habitats and cities.”

At the same time, we must also sustain the new trends formed during the pandemic too, Jörn Rabach of Hutchinson and Partners highlighting that “the boom in inner-city cycling that we’ve seen during the pandemic must be supported by the improvement of cycle-related infrastructure by our local councils”.

Of course, we all understand the power data has in our lives. What the pandemic has shown us, though, is that data capture and analysis should play a more central role to our cities’ defences. In Tel Aviv for example, the city developed a dashboard which presented an overview of the Covid-19 situation, including information such as hotspots and the origination of calls to city’s Covid hotlines. This real time data helped decisionmakers in fields such as population, operations and public health.

However, smart infrastructure can also help mitigate more ‘day-to-day’ risks such as flooding. As Edward Williams put it, “smart cities will be at the centre of a more resilient and safer national and international infrastructure” highlighting that “data capture is essential to understanding the progress of an emergency, shaping our response to it and containing it”.

But the potential for data and smart infrastructure goes further than this. The undoubted cementing of home working (even if only partial) will significantly reduce pressure on transport systems and open up city space for reconfiguration. Smart infrastructure will be key to mapping and supporting these changes, opening up greener, safer and healthier spaces for more creative use such as affordable accommodation, urban farming, community hubs and walking / cycling routes. 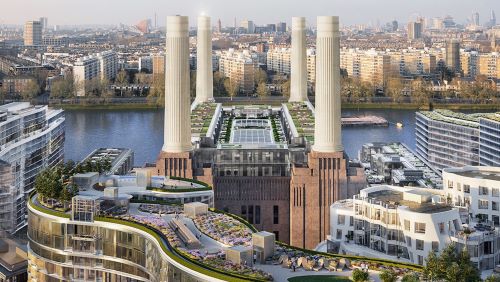 With the built environment responsible for over one-third of global energy consumption, professionals working in this industry need to be leading the charge in turning the tide on climate change.

While increasing our use of sustainable materials and solutions when building new structures is key to this, Jörn Rabach suggests that “repurposing existing structures over new built solutions must be an initial consideration”. A process called adaptive reuse. Battersea Power Station is a great example of this. A distinct landmark on the Thames, it had been abandoned for decades, but is now in its final stages of redevelopment into homes as well as shops and offices.

Reusing structures can save a lot of carbon being emitted into on environment. For example, building a two-bed house can emit as much as 80 tons of carbon dioxide; repurposing a disused church hall for the same purpose would emit a lot less.

But whilst repurposing is ideal, it is not always realistic. Which is why Rabach put forward that “we must ensure that any new residential buildings are designed with flexibility in mind allowing them to function simultaneously as home offices, home schools and family homes.”

A positive of the pandemic is that it dramatically sped up much needed digital transformation in the AEC industry – such as embracing cloud-based tools that support a smarter way of working from anywhere. With the future of our cities in the hands of the architecture, engineering, and construction communities, it’s really positive to see this development and this will benefit citizens directly.

As Christopher Martin summed it up: “As a profession we have long-known and emphasised that how we plan, build, and manage our cities now, will determine the outcome of our efforts to achieve a regenerative and harmonious development tomorrow. The power that built environment professionals have to shape safe and thriving communities is more relevant every day, so we will be doubling down, sharpening our resolve, and continuing to protect cities as places of prosperity, happiness, and humanity.”

We are still in the throes of the pandemic, so it’s of course too early to know what long-term impact it will have on our future cities. But that does not mean we can just sit idly; long-term solutions require action now from those working in the built environment. Brave and innovative thinking is required to marry tech with social wellbeing, better utilise existing buildings and to connect cities to the wider country in a more equitable way. It is all of our responsibility to use the seismic event of the pandemic as a catalyst for positive and progressive change. Let’s begin working today so that we can have cities that serve us well tomorrow.

Tim Whiteley is the co-founder of Inevitech.