Embedding social value into the heart of the planning and procurement process emerged as one of the key themes at the latest Infrastructure Intelligence Live event on Friday 6 November 2020.

Early and effective community engagement, cross-party political commitments to long-term infrastructure investment, stronger collaboration between local and national decision-makers, more agile digital and planning policies and the growing importance of housing to be seen as key national infrastructure, all took centre stage during a lively and compelling online debate.

The UK economy has been badly shaken by Covid-19 and there will be more aftershocks to come. It is clear that infrastructure investment will be needed to power the country’s recovery but, for that to happen, the right conditions for creating confidence, stimulating investment, and enabling projects to move forward will be crucial.

James Hampson, vice president, major programmes and projects for Europe at Jacobs, began by describing how the industry was getting to grips with unprecedented times, and said that embedding social value was critical to winning public and political support for infrastructure investment.

“We should rethink procurement frameworks and look at reinvestment, adding value, and not just concentrate on lowest cost,” said Hampson. “We should embed social value into the heart of planning process and improve industry collaboration for the greater good of society. This is an unprecedented opportunity to change how we do things, and a key enabler of that would be to achieve a cross party commitment to infrastructure investment and the planning process, to avoid the uncertainty of a typical four-year political cycle,” he said.

Senior civil servant Pauleen Lane, professional lead for infrastructure at The Planning Inspectorate, described a busy summer working on Project Speed and outlined the importance of digital transformation in the future planning process. “Project Speed is a genuine end-to-end review about the effects of major infrastructure investment,” she said. “A lot of traditional modelling just doesn’t work at the moment, so we’ve looked at every aspect of projects - understanding how decisions have been made in the past, and looking at how we can do things better in the future,” said Lane.

Robbie Owen, head of infrastructure planning and government affairs at Pinsent Masons, said that an ageing national policy statement regime was slowing project delivery and he called for housing to be recognised as a key plank of national infrastructure.

“Major projects depend on the national policy statements, but the current policy statement from 2011 is getting old and is slowing up delivery of projects and leading to more judicial review. We urgently need policy statements that are kept up to date - there needs to be ongoing five-year reviews. There also needs to be more effective and earlier engagement between applicants and all the various statutory bodies to speed up the pre-application stage. 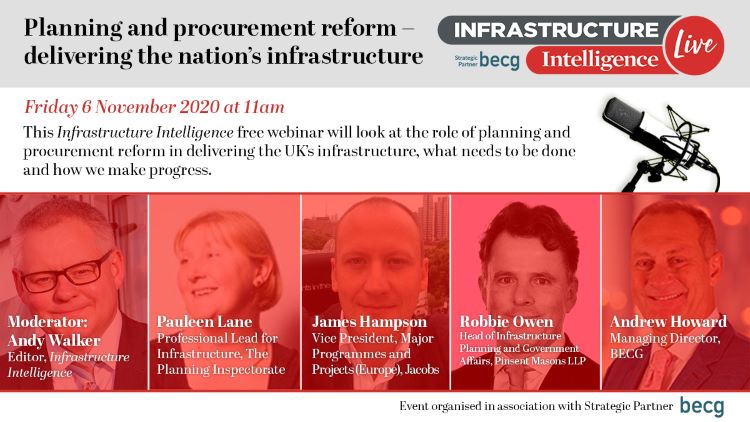 Andrew Howard, managing director of BECG, agreed with the other speakers, and emphasised that politicians need expert guidance from the industry. He also stressed that a joined-up approach, effective and transparent community engagement and local devolution were all vital in improving the delivery of the UK’s infrastructure.

“I applaud the investment and ambition of the government, but local, regional and national bodies need to work together - and that’s why public engagement is vital,” he said. “There’s growing public support for infrastructure investment, but community and political engagement in planning goes to the heart of credibility in decision making and winning and maintaining public support,” Howard said.

Calling for greater powers to be devolved to local and regional bodies, he added: “It’s fantastic to have a government committed to infrastructure and unblocking the planning system, but there’s currently a lack of joined up thinking between the government and other agencies. Empowering local and regional government can really help with a joined-up approach,” he said.

Infrastructure Intelligence editor Andy Walker said: “With the new lockdown and the extension of the furlough scheme until March next year, we are looking at some very challenging times ahead. Sustainable infrastructure investment has never been more vital to lift both the national and global economy and positive planning and procurement reform needs to create the right conditions for the industry to step up and play its part in rebuilding a post-pandemic world for the good of society as whole.”

Click here to watch a recording of the “Planning and Procurement Reform - Delivering the Nation’s Infrastructure” webinar on our You Tube channel.