REDESIGNING STREETS FOR THE COMMUNITIES OF THE FUTURE

With policymakers expecting infrastructure to deliver on social value, the environment and the needs of communities, designers need to visualise streets differently, says Stantec’s Josh Grantham.

We walk our streets every day, but we don’t often think about the details - how wide is the road, how high is the kerb, how many houses does it lead to – and, maybe most importantly, who is it designed to serve?

Yet these details are fundamental to street design and many local authorities have dedicated highway design guides for developers to refer to. But our ideas of what streets should be are changing and in response, Suffolk County Council has redesigned the rule book.

The very first highways design guide was created back in the 1960s and since then the guides have become an important tool for developers who need to create streets that are not only safe but that will be approved by the local authority. Streets designed in the planning process often embody the vision of the local authority, incorporating green spaces, active travel options, SUDs etc, but this aspirational vision often falls flat when the highway authority refuses to adopt verges, or maintain street trees. The local highways design guide is the go-between manual that developers refer to, to marry the vision of the council with the requirements of the highways authority.

Back in the 1960s, when streets became strategic in terms of housing delivery, the very first guide determined that you should have 6.5-metre-wide roads to enable cars to travel fast from point A to point B. It was a guide that prioritised the driver. Today, our priorities are shifting and policymakers are expecting infrastructure to deliver on aims of social value and the needs of communities, housing requirements, and environmental concerns. This means that designers need to visualise streets differently.

When Stantec started working with Suffolk County Council, they were referring to a highways design guide drafted in 1993 and, recognising the need to update the guide to reflect a more modern view of street design, asked our team to help. The project team began by evaluating how the local communities used their streets and what they might need in the future. During this exercise, it became clear that street design is still very car-led in practice.

Even the 2007 Manual for Streets, one of the leading guides for street design, while advocating a user-led approach, doesn’t give much in the way of detailed guidance on how to implement it. The guide introduces the concept of a user hierarchy – pedestrians, cyclists, public transport, cars – but then goes on to endorse a car-led approach to design.

So, working together, Stantec and Suffolk developed a new methodology to identify a user-led approach to ensure streets are designed to prioritise those who use them most and don’t automatically place the car at their heart. 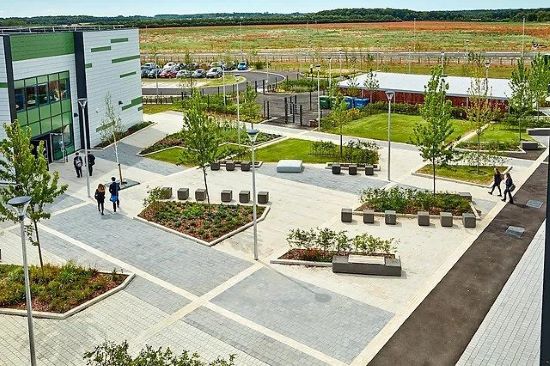 The existing model refers to street design using a hierarchy of terminology - primary street, secondary street, tertiary street, and private drive - where classification is determined largely by how many cars use the street in question. The team recognised that while a primary carriageway may cater to cars and buses, it may not cater well to the requirements of pedestrians or cyclists and so not act as a primary route for these users.

To redevelop the methodology of street design, the team had to create different elements to make up the uses of a street. These elements replace the outdated terminology by considering the true users of the street, for instance prioritising cycle routes and footpaths in streets where there are fewer cars, while designing primary carriageways for important public transport routes. Street typology of this nature not only leads to streets that are 100% user-led, but also enables local authorities to set developers objectives in delivering streets that fit the needs of the community.

Finally, to emphasise the fact that the new methodology focuses on users instead of cars, Suffolk County Council renamed their highways design guide the street design guide.

One guide fits all?

But not every council has a highways design guide. Many rely on national manuals or even guides from other local authorities when it comes to designing their streets. While this may have worked in the past, the recent influx of high-level strategic documents that influence street design means this approach must now be considered with caution.

In recent months, we have seen, or are anticipating, the launch of Manual for Streets 3, LTN 1/20 Cycle Infrastructure Design Note, the update to the National Planning Policy Framework, and a national model design code. In addition, there are several secondary documents, like Healthy Streets and Cycling by Design which also feed into the mix and must be considered when designing new streets.

Referring to these documents alone leaves much open to interpretation and creates stumbling blocks as the documents fail to advise on how they should be used alongside each other. But most importantly, these national manuals don’t consider the needs of local communities, or the local objectives of the councils such as the requirement for more housing, more large developments, or budget constraints. Referring to these manuals without the local context provided by a bespoke streets design guide could easily result in identical streets that are cloned up and down the country and meet the needs of no one.

Councils can call on good consultants to provide support in creating guides that make the most of the national opportunities but in a way that works for local needs. As in Suffolk, who are now waiting for their design guide to be approved by the cabinet in November, councils everywhere can benefit from bespoke guides that will safeguard better street design for the future of their communities.