NEW ROUTE REVEALED TO SLASH 30 MINUTES OFF JOURNEYS FOR 22,000 MOTORISTS

A new link connecting the M54 and M6 motorways has been unveiled by Highways England which is set to benefits thousands of drivers using the notoriously busy routes in the Midlands.

The multi-million-pound connection is expected to slash up to 30 minutes off journeys for regular commuters each week and promises to take around 22,000 vehicles a day from the A460, making that major road less congested.

It will also ease congestion on the A449 and A5 by separating local traffic from long-distance and commuter traffic, and overall the impact on congestion will boost the regional economy. The route was chosen after a consultation that saw nearly three quarters of respondents give it the thumbs up.

Commenting on the new Midlands link, project manager Andrew Kelly said: “We want to provide a road that works for both drivers and the local community living nearby. We were really pleased to have so much feedback during the consultation and this route was the clear winner. Once completed, it will also relieve traffic congestion on the A460, A449 and A5, improve safety and support economic growth for the Midlands.” 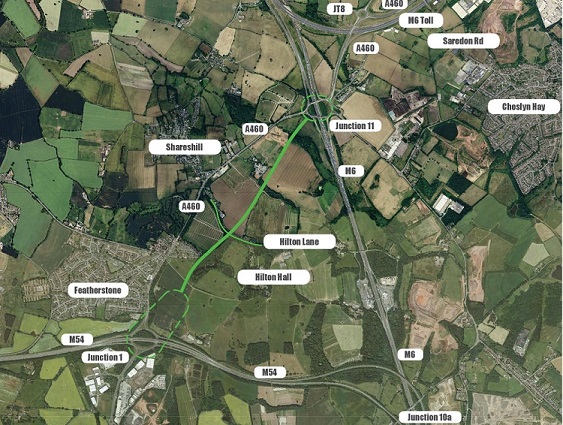 Transport authorities say the A460 currently carries about 26,500 vehicles each day with heavy goods vehicles making up about 10% of this figure. Highways England consulted on three options for a new route, and will now take forward its preferred route, which is based on ‘Option B West’.

Sub-national transport body Midlands Connect has welcomed the proposed new route. Midlands Connect’s Maria Machancoses said: “This project is a potential game changer for the Midlands motorway network; it will make both long distance and short journeys quicker and less congested, as well as support ambitious economic growth plans for the region. Motorists, the logistics industry and businesses will all benefit, and Midlands Connect is calling for the earliest feasible construction.”

There is set to be a further consultation in 2019 when the roads body will ask for further views on this more detailed design before applying for a Development Consent Order which is part of the planning process for the new route. In the meantime more work will be undertaken on completing surveys and investigation work to help design the scheme in greater detail.