MORE LOCAL POWERS VITAL TO LEVEL UP THE NORTH/SOUTH DIVIDE

Devolving real powers and funding to the regions, and putting people and communities at the heart of future post-Covid infrastructure planning to help tackle deep-rooted social issues, all emerged as key themes at the latest Infrastructure Intelligence Live event on Friday 2 October 2020.

Key regional leaders, Greater Manchester mayor Andy Burnham and Liverpool City Region mayor Steve Rotheram, were joined by Jessie Joe Jacobs, the woman bidding to be the first female mayor in the country in the Tees Valley, on a panel which also included representation from the North of Tyne Combined Authority, IPPR North, Arcadis and event series strategic partners, BECG.

Hosted by Infrastructure Intelligence editor Andy Walker, the three influential politicians and other panellists all brought their own clear insight in discussing the role of infrastructure investment in levelling up the North/South divide.

The government has made it a key priority to address historic inequalities and ‘level up’ underperforming and left-behind parts of the UK through a programme of infrastructure development, investing in education, skills and scientific R&D. Infrastructure investment will play a key role in this ‘levelling up’ and so will the elected metro majors and their combined authorities.

Andy Burnham said that Westminster had under-invested in the north for decades, and that the Covid pandemic had ruthlessly exposed long-standing inequalities in the country. “Levelling-up as a concept needs to be redefined because of the pandemic,” said Burnham. “It needs to be more than high-profile, hard-hat projects. Levelling-up needs to be about people, not just about funding,” he said.

He then outlined how homes, jobs, transport, digital infrastructure and a green recovery were all vital to help level-up the north/south divide. “Homes build health and we need infrastructure funding and support to build affordable eco-friendly homes for social rent,” he said.

“Transport has got to change dramatically in the north and we need the same levels of investment as TfL. We need the funding and the powers to deliver a modern integrated and affordable transport system, to help make public transport a more preferable option than the car,” said Burnham. “There’s also a real potential to create jobs in building a green recovery, with retro-fitting buildings an important part of reaching our 2028 carbon-neutrality target."

And, in a clear message to the industry, Burnham said: “The north needs a transformation and we need infrastructure companies to work together and think about places and placemaking, rather than just working from project-to-project.” 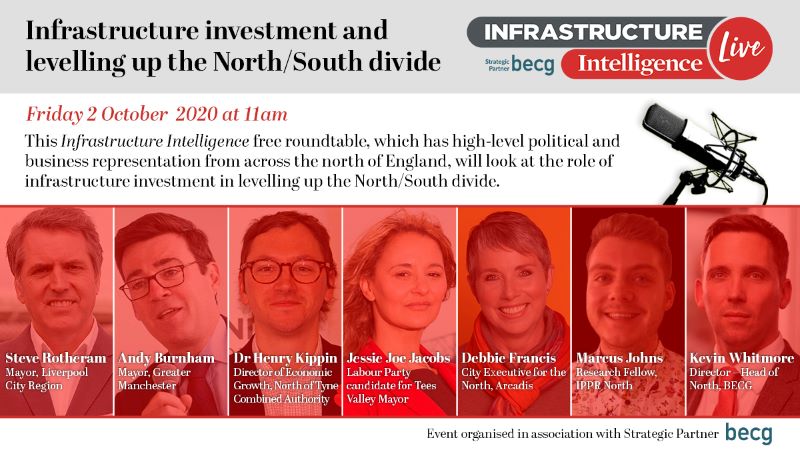 Steve Rotheram said that infrastructure was “massively important pre-pandemic and it was now much more important than ever”. “We’ve been disproportionately hit by Covid and we’re going through a terrible period in our history,” said Rotheram. “Before the pandemic, we were the fastest growing city region and we still have ambitious plans for the future. Transport is critical for the future, but our plan for building back better embraces a green revolution including digital connectivity and renewable energy. It’s not a begging bowl, it’s a genuine opportunity for investment that will see a great return for UK plc,” said Rotheram.

Jessie Joe Jacobs said that real local and regional decision making was vital and, highlighting examples of infrastructure often not being good enough at neighbourhood level, she emphasised that community wellbeing and social return on infrastructure investment should be a priority.

“If we’re going to level up, we need to include smaller towns and villages in any infrastructure plans,” said Jacobs. “Real power of devolution should be rooted in strong local communities, with power in the hands of local people who are connected to their communities. We’re still having to sell plans to the treasury. We don’t want to go the treasury with a begging bowl, we need to have that money in the north.

“In levelling-up, we don’t want to bow our heads to Whitehall and be grateful for anything they decide to give us. It’s not good enough,” Jacobs said.

Debbie Francis, Arcadis city executive for the north, emphasised that levelling-up was not a competition between north and south, saying: “It’s essential that infrastructure and housing go together. Stronger and healthier communities have to be at the heart of any future investment plans.”

Marcus Johns, research fellow at IPPR North, described the UK as one of Europe’s most economically divided countries, with a hefty difference in transport spending compared to London, while Dr Henry Kippin, director of economic growth at North of Tyne Combined Authority, highlighted the importance of physical, social and digital infrastructure working together for the benefit of the whole community.

Political communications consultant Kevin Whitmore, director, head of north at BECG, said: “There’s been a consistent theme here today - a consistent and clear voice from the north. We need to see levelling-up go hand-in-hand with devolution, with more powers and funding given to local communities. Infrastructure investment needs certainty, and we don’t have that at the moment.”

Infrastructure Intelligence editor Andy Walker said: “This was an excellent debate and it is clear that local leaders in the north will not stand by and allow their regions to be left behind any longer. Devolving power and funds to local leaders who know their communities is vital and emphasises the difference that positive infrastructure investment can make to adding social value to communities and helping to tackle some very deep-rooted issues in society. It’s a strong message - and one that the industry needs to make time and time again. Infrastructure Intelligence looks forward to leading the way in raising the profile of these issues and ensure that they are heard by politicians and policy makers.”

Click here to watch a recording of the roundtable event on our You Tube channel.