The nuclear industry is no stranger to risk and disputes are common. Here, a group of partners at law firm White & Case look at the importance of managing dispute risks in nuclear power projects.

The nuclear industry has proven to be a fertile ground for commercial disputes, giving rise to some of the most high-profile arbitration cases in recent years. Few industry sectors face sterner regulatory oversight or deal with greater technical complexity.

Nuclear power is a highly sophisticated industry whose projects are prone to cost overruns and delays. Of the 449 nuclear power reactors currently in operation around the world, only two were completed on budget and on time. When it comes to building a nuclear power plant (NPP), it’s almost a case of when - not if - a dispute will arise.

Understanding dispute risks inherent in new NPP projects goes a long way in helping all involved to manage these disputes when they arise.

There is intense scrutiny of all aspects of nuclear plant construction from both a safety and security perspective. Reactor suppliers, contractors and day-to-day operations will be under watch by the nuclear regulator in a fashion that is unrivaled in other construction projects and the tension between the regulator, the owner and the supplier is always there.

But even projects that face no obstacles can take the best part of a decade from conception to operation, historically averaging at least eight years to complete.

Overruns are often the norm and with this come disputes about who is responsible and for how much. Given the nature of the nuclear industry and the costs involved, these disputes - which are costly affairs themselves - tend to be played out in a very public way and often take a very long time to resolve.

With conventional large-scale construction projects, time, cost and quality are the key considerations. However, when it comes to nuclear, a completely new layer of safety constraints is imposed over the top of these traditional concerns.

Licensing risk is one of the critical areas for new nuclear projects and this often generates headlines across the public forum due to their politically sensitive nature. Through the process, an initial license to develop a new plant may be required, followed by a construction license, followed by licenses to permit the transportation of nuclear fuel, and finally an operational license to run the plant. And every one of these steps presents an environment for delays and cost overruns. 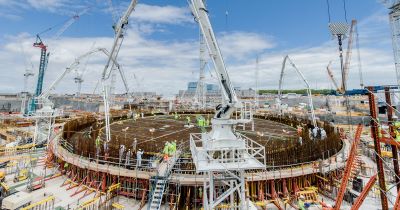 During the nuclear industry’s heyday, from the 1960s to the 1980s, countries such as the US, France and the UK developed deep and institutional expertise in the field of nuclear planning and construction.

Much of that skill base has subsequently been lost, with many equipment and service suppliers exiting the nuclear industry. By the early 2000s, only a relatively limited supply chain to support renewed interest in NPP construction remained, with many leading experts long past retirement age.

This left many countries with established expertise in operating and decommissioning nuclear plants, but a real shortage of know-how in the planning and construction phase – adding significant risk. This skills gap extends to the wider support industries, including essential legal support and financing expertise.

Size can be underestimated

Given the technical expertise required and the regulatory frameworks that must be worked within, the sheer volume of documentation involved is unmatched in the construction industry. Just managing, storing and accessing documentation that is generated in the planning, licensing, construction and commissioning stages of the project requires incredible organization and expertise.

As one nuclear power plant owner explained: “Understanding the size of the project at the beginning is crucial, because any changes made to the design once the project has started can bring unwanted surprises in later years.”

One of the most important stages of any NPP project is during the design and planning phase. The more detailed and prescriptive the documentation is at this stage, the more precise the contract, the greater the chance of avoiding delays and disruptions during construction. This also gives an opportunity to clarify each party’s obligations and ensure that any slip in the schedule can be identified and remedied quickly.

Throughout the construction of any nuclear plant, there are likely to be alterations or variations at the request of the regulator. These requirements differ greatly from country to country, and since there is no choice but to follow these variations, it is essential that detailed documentation is in place to determine who carries the burden for cost or schedule impacts. A proper system can help mitigate the impact these demands can have on the project.

Nuclear power is here to stay

Nuclear power - while still a small proportion of global electricity production - will remain a key source of energy for decades to come. Given the significant risks inherent in any new NPP project, mitigating these risk factors from the outset should be one of the key considerations for all involved. The greater the understanding of issues that could arise and the earlier these issues are understood, the less likely these risks are to evolve into disputes - or at least the better prepared those involved will be to manage those disputes. This foresight could go a long way to reducing the significant cost increases and extended construction schedules that currently challenge the industry.