MAJORITY ACROSS 29 COUNTRIES BELIEVE INVESTING IN INFRASTRUCTURE IS VITAL

Almost three quarters (73%) of people across the world agree that investing in infrastructure is vital to their country’s future economic growth but 59% do not believe enough is being done to meet infrastructure needs.

Europe scored the lowest of any region in terms of overall satisfaction, with only 26% of Europeans saying they are satisfied with their national infrastructure compared with 32% globally and 28% in the US.

Romania, Italy, Hungary, Spain and Belgium occupy five of the bottom six countries. Overall satisfaction has declined in Europe but also in G8 nations and globally since the previous Global Infrastructure Index in summer 2017.

The survey found 64% of people agreeing that local communities’ views on infrastructure plans should be heard properly, even if it means delays, whilst 61% feel that their country does not do enough to involve people in decisions about which infrastructure to invest in.

Globally, more say they are comfortable with foreign investment in new infrastructure if it means it gets built more quickly than are not, by a margin of two and a half to one (49% to 19%). 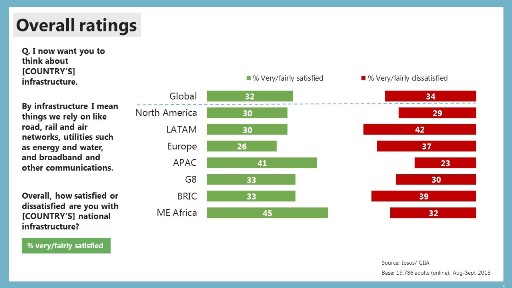 Andy Rose, CEO of GIIA, said: “Our survey shows a global decline in public satisfaction with infrastructure since 2017 reinforcing the message that governments need to prioritise creating the right environment for investment. Across the world, the public are relatively more positive about sectors where private investment features prominently although there remains room for improvement.

“Climate change, technological advances and ageing populations all pose unprecedented challenges for governments in delivering their future infrastructure needs at a time when   public sector balance sheets are under increasing strain. Governments and regulators should be focussed on the outcomes of good quality infrastructure and working with the private sector to find the best ways to deliver, operate and improve our infrastructure for the benefit of future generations.”

Ben Marshall, research director at Ipsos MORI, commented: “Our annual survey underlines peoples’ strongly held conviction that governments need to do more on infrastructure. Globally, publics single out particular sectors as priorities for investment including road, rail and flood defences, but this varies by region and country.

“People are both pragmatic – saying they are comfortable with foreign investment – and principled – wanting to see a democratic deficit narrowed with people more involved in decision-making.”

Click here to find out more about the Global Infrastructure Index survey.