Many of the Scottish government’s flagship building projects have been hit by months of delays, according to new figures revealed in parliament.

In a progress update on its major capital projects issued on 5 November 2018, the government revealed that more than a dozen projects have been hit with further setbacks since an earlier update issued in the spring.

These include a delay of at least 17 months for the new Royal Hospital for Sick Children in Edinburgh, with still no confirmed for the project’s completion; a year for the Haudagain roundabout in Aberdeen and at least six months for a new prison in the Highlands.

The government’s update also reported delays of two years for the Edinburgh-Glasgow improvement programme and two years for electrification of the Stirling, Dunblane and Alloa rail project.

Many of the delays have also been accompanied by project cost increases. The delayed HMP Highland prison in Inverness has seen its cost increase from £73.9m to £80.5m.

Scottish Conservative shadow finance secretary Murdo Fraser said: “It’s understandable that there will always be the odd delay to major projects, which can occur for a range of issues. But under the SNP this appears to have become the norm.”

The delays to key infrastructure projects across Scotland are worth billions of pounds to the economy and amount to more than a decade in total.

The chart below shows a breakdown of infrastructure project delays which have emerged since the last Scottish government update six months ago. 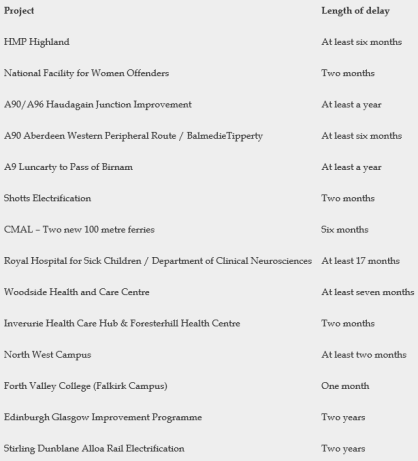