Atkins hosted a Building Back Greener event at a packed Manchester Art Gallery on 12 October 2021 in the company’s first face-to-face client event for nearly two years.

“It’s more than 18 months since we were able to get together like this and I just wanted to say thank you to all our clients for keeping us going during the pandemic,” Atkins UK CEO Richard Robinson told the audience of 200+ industry leaders which included most of Atkins senior staff.

The keynote speaker at the event, which was chaired by Henri Murison, director at The Northern Powerhouse Partnership, was Manchester City Council leader Sir Richard Leese who offered a hard-hitting analysis of the current climate challenges. “We are in the last-chance saloon on climate change and are seeing unprecedented climate events around the world – it is a very serious problem,” said Leese.

In a wide-ranging speech on a range of climate issues, Leese said that the current energy supply and fuel crisis showed that the UK hadn’t invested enough in alternative energy and more needed to be done. He also said that the effects of the climate crisis were not evenly spread. “In the UK, the poorest communities are suffering the most from climate change and with energy price rises, if you’re living on Universal Credit then you are switching off the heating off in case your bills spiral,” he said.

Leese said that the solution to these issues was promoting “good growth” and “sustainable growth” which needed to be done in consultation with communities and not done to them. He cited the example of his own city, where Manchester City Council had involved 200 organisations in developing the city’s first climate change strategy back in 2008. More recently, when the strategy was updated, 3,000 organisations took part in the consultation that co-produced the strategy, he said. “If you let people decide what they want to do and listen to them then they become involved in the process,” Leese said. 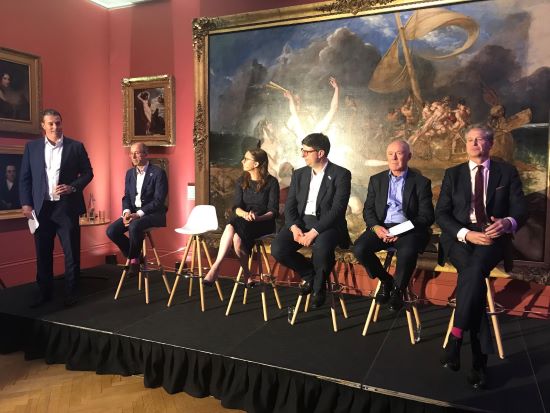 He highlighted the success of the large-scale retrofitting programme in the city that had targeted 10,500 social homes and created 6,500 jobs including 250 apprenticeships. Leese also said that the council had reduced its emissions by 21% and was running a fleet of electric refuse collection vehicles and had target more carbon savings with the construction of the new town hall in the city. “The aim is to have a zero carbon Manchester,” he said.

Leese also declared his support for mass mobility, including HS2 and also aviation where the city council owns three airports as part of the Manchester Airport Group. “Our airports have been zero carbon since 2013 but the planes are not, so there’s obviously work to be done there,” he said. As a further sign of Manchester’s green intentions, he also highlighted the two hydrogen fuelling stations in the city and said that the city council, police and the airport group would be increasing their use of hydrogen-powered vehicles going forward.

He said that the seriousness of the current situation called for concerted and urgent action. “Levelling up, health inequalities and zero carbon is a real challenge for local and national government and it calls for more devolution and devolved systems because we need to do this at pace,” Leese said.

Following Leese’s address, Atkins’s director for UK transportation Lizi Stewart echoed the city council leader’s call for more devolution. “We need delegation and empowerment and from that to grow the skills and experience to make the changes we need,” she said. Also speaking at the event, Richard Threlfall, global head of infrastructure at KPMG, said that the consultancy sector had a real opportunity in the climate advice it gave to clients to “highlight the importance of the role of digital and tech in getting us out of the current mess that we are in”.

Richard Robinson agreed, saying “If we can do this well then we can help others do it”. Citing the example of the work that Atkins was doing to help regenerate the former steelworks site in Teesside and turn it into a centre for green industries, Robinson struck an optimistic note on closing the discussion. “The climate emergency has presented us with an opportunity to develop new sustainable industries that can stand as an inspiration to other parts of the world that are in a similar position and having to move on from traditional industries,” he said.