The construction and infrastructure industry has expressed its disappointment with the government’s Integrated Rail Plan, which failed to deliver HS2 in full and revealed a scaled back version of Northern Powerhouse Rail. Rob O'Connor reports.

Leading industry figures have expressed their disappointment with the government’s long-awaited Integrated Rail Plan (IPR), published last week, which failed to deliver HS2 in full and also outlined a much-scaled back version of Northern Powerhouse Rail.

A wide range of reaction veered from northern business and political leaders describing the plan as “woefully inadequate”, while leading industry figures, although pleased a plan was finally in place, also described it variously as a “huge disappointment” and a “lost opportunity.”

The consensus, if any could be found, was that the plan, although providing some much-needed certainty, was definitely not the plan that been both expected and hoped for.

Here is an edited round-up of the reaction that landed here at Infrastructure Intelligence.

Sir John Armitt, chair of the National Infrastructure Commission, said: “We now have a realistic plan for major long-term investments to improve rail for the north and Midlands in the face of public spending constraints. In our advice to government the commission made the strategic case for more investment in rail to help deliver levelling up. We set out a number of possible packages of schemes based on our analysis of the economic benefits of the various projects and depending on the level of funding made available by government.

“It is sensible that the Integrated Rail Plan takes an adaptive approach, setting out a core pipeline of investment that should speed up delivery of benefits for communities and businesses. Beyond that pipeline, if additional funding becomes available, the focus should be on further improving connections between Sheffield, Leeds, Bradford and Hull which are the kind of regional links likely to enhance economic benefits.”

Andy Bell, director at Ramboll in the UK, and chair of the Association for Consultancy and Engineering’s transport group, said: “Just 18 months ago the prime minister told parliament that it ‘does not make any sense’ to build Northern Powerhouse Rail without HS2 and the government’s strategy was to do both ‘simultaneously’. Clearly the pandemic has strained public finances since then, but another change of approach does not help an engineering sector scaling up skills and resources – at a time of global demand for rail expertise – around what appeared to be clear commitments and pledges.

“The priority now must be to make the new approach deliver for both society and the net zero economy we must build. This means ensuring that the schemes that do go ahead increase rail freight capacity and encourage people out of cars, while also ensuring that they are designed as part of broader place-based regeneration strategies. With the change from Network Rail to GB Rail another potential complicating factor, ensuring a coherent and dependable pipeline of work for efficient rail investment needs to be a priority for the Department for Transport. Only then will rail be able to effectively contribute to improving the lives of people in communities across the UK.”

Mark Southwell, managing director, civil infrastructure, UK & Ireland, AECOM, said: “The decision not to deliver HS2 in full and a scaled back amount of new line for Northern Powerhouse Rail is a lost opportunity for the communities the lines would serve, as well as the rail industry which was geared up to deliver. Decarbonisation of our transport network and levelling up are two of the biggest challenges of our time and investment in a high-speed rail network will pay dividends for decades to come.

“However, there is much to welcome in the IRP in terms of its ambition to rapidly strengthen connections between regional towns and cities, providing a catalyst for investment in areas that will bring in businesses, jobs and housing. Industry and government now need to work together to formulate a clear plan for how these rail schemes will be delivered. The sooner spades are in the ground, the sooner communities can benefit from the full impact of the benefits rail can bring.”

David Whysall, managing director for UK infrastructure, at Turner & Townsend, said: “This is not the plan that some expected or hoped for and there will be justified disappointment, particularly in terms of much needed east to west connectivity in the north, with long-standing and high-profile projects being pushed aside.”

“However, there are silver linings too. This is a £96bn plan for rail which in following advice from the National Infrastructure Commission moves away from the piecemeal planning of the past. For the first time we have a coordinated approach to investment, that follows the announcement earlier this year on the formation of Great British Rail. The government now needs to convince the communities of the north and Midlands that it is the right plan.”

Richard Hoare, UK managing director for rail at Arcadis, said: “The scale of the task is huge. The need to decarbonise and update an ageing, under-invested network inevitably means that some very difficult choices needed to be made. The strategic decision to prioritise connectivity within the regions while investing in the high-speed network will give a strong chance of delivering improved services for the towns and cities that can most benefit and have been historically underfunded. We’ll need to work together, across the sector, to focus on the positives and realise these benefits for stakeholders who may be disappointed by the plan set out today.”

Paul Robinson, UK rail lead at Gleeds, said: “The continuous adjustments to funding, priorities, and overarching policy in preceding years have created inefficiencies and cost the tax-payer millions while delivering very little, so we have all been waiting for a brave, integrated and above all consistent rail plan to shape the next decade and beyond. While the IRP does at least provide some direction, it is not the ‘infrastructure revolution for this country’ that Boris Johnson claimed would be coming.”

Marie-Claude Hemming, director of external affairs at the Civil Engineering Contractors Association, said: “We welcome investment in upgrades to rail in the north, but it is a missed opportunity that the government has failed to grasp the transformational potential of the full HS2 eastern leg and Northern Powerhouse Rail plans. The government’s levelling-up agenda must include a step-change in infrastructure delivery in the north of England, and the decision to scale-back these plans can only hinder its stated intention of delivering a more balanced UK economy in the longer term.” 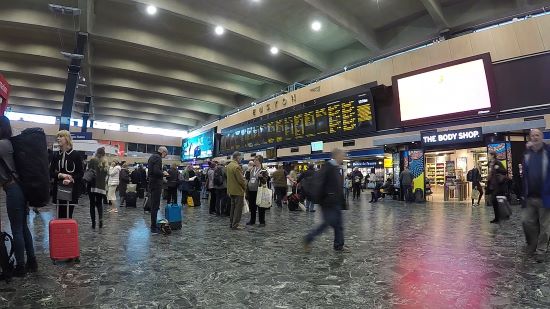 A High-Speed Rail Group spokesperson said: “It is welcome that the announcement confirms that the vast majority of HS2 will go ahead ... but the cut-backs are a huge disappointment. Today’s U-turn significantly dents confidence in the sector. The regular chopping and changing of the scope of projects, and revisiting questions that had previously been settled, is one of the biggest drivers of high infrastructure costs in this country. It is imperative that the government now set out clear timescales for the proposed projects to move forward, and then stick to them.”

Darren Caplan, chief executive of the Railway Industry Association, said: "It is positive to see confirmation of some local and regional rail projects within the plan - throughout the north and Midlands - and the speed at which the government aims to deliver them. However, it is difficult to see this IRP as anything other than a piecemeal approach to national strategic railway infrastructure development, given the abandonment of HS2 eastern leg and the scaling back of Northern Powerhouse Rail.”

Louise Gittins, interim chair of Transport for the North, said: “Today’s announcement is woefully inadequate. After decades of underfunding, the rail network in the north is not fit for purpose. It is largely twin-track Victorian infrastructure trying to cope with the demands of a 21st century economy. Leaders from across the north and from across the party political divide came together to ask for a network that would upgrade the north for this century and in line with the rest of the country. Our statutory advice asked for an over £40bn network but the government has decided to provide even less than half of that.”

Marcus Johns, research fellow at IPPR North, said: “The Integrated Rail Plan appears to be a levelling down of government’s commitment to the north. Not only does it break the prime minister’s own promises and his manifesto pledges, but it also breaks many years' worth of plans and assurances to the north of England. The north is now reliant on creaking Victorian infrastructure that undermines its economy, its people’s quality of life and its ability to reduce emissions. A good transport network requires both strong strategic national rail links and high-quality local transport, the north shouldn’t have to take one or the other. It is time for a U-turn. Nothing else will do. government must commit to delivering Northern Powerhouse Rail, HS2’s eastern leg and local transport improvements, or face the anger of a betrayed north.”