With a new European flagship office in London and plans to hire 2,400 staff in the UK over the next two years, Jacobs are on the up. Andy Walker visited their offices to speak to company president and chief operating officer Bob Pragada.

Change was in the air when I visited Jacobs’ brand new offices in London Bridge overlooking the Thames. The firm’s president and COO Bob Pragada was keen to talk about the pace of that change and the effect it was having on his company and the industry. “Megatrends are accelerating the pace of change and there is a real sense of urgency,” he says. “Climate change is having a pronounced effect from everything from sea level rise to drought areas to coastal resiliency and all this is being accelerated so that there has to be a different way of doing things. And I haven’t even talked about the political overtones that have complicated things too,” Pragada says.

Technology is certainly changing the infrastructure business and the way that organisations like Jacobs are working. “Technology in the infrastructure world means the use of data and where we are trying to go as a company is to use technology to enable more efficient solutions that are more geared towards the outcome,” says Pragada. Technology means that the problem of too many people on the tube is not solved by building another underground or adding more lines. It’s more about dealing with a capacity issue of mobility in London and using technology to address that. “We see the future as redefining what the issue really is and then figuring out what the best technology is to enable that solution,” Pragada says.

“It’s about a true appreciation of the need. What are the needs of the community? What are the effects of climate change? How do we deal with that? Having the best engineer in today’s world only opens the door,” he says. It’s about having a dialogue with the client and importantly also society. “It’s also about trust, certainty and delivering on solutions. Clients’ needs are much greater than they were years ago,” says Pragada. 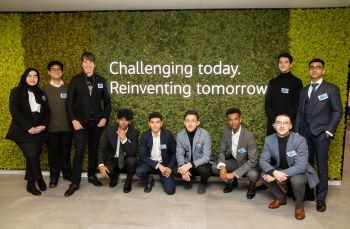 Turning to Jacobs’ announcement to hire 2,400 staff in the UK, Pragada said that the move would enable the company to become more digitally enabled while still retaining its key skills sets. “We are a user of digital skills, but we are not a digital company. We will recruit plenty of engineers, but we will also bring in data scientists. Above all, we want global thinkers. We are establishing a flagship office for the whole world. Global connectivity means that we have talent around the world delivering global solutions locally. 50% of the work we do today is done with global teams. I can go to the Metrolinx site in Toronto and half of the team is from the UK because our rail experts in the world sit in the UK,” he explains.

Technology makes that way of working seamless in a way that wasn’t possible even ten years ago. There have been big shifts in such a short time with firms now providing clients with the right talent wherever it may be in the world. Clients are benefiting from this flexibility.

"There have been big shifts in technology in such a short time with firms now providing clients with the right talent wherever it may be in the world."

I asked about the size of the increase in staff Jacobs is undertaking in the UK. Pragada plays down the almost 30% rise in headcount. “It is a big figure when you consider the number that we have in the UK today but it’s not a big figure if you think about the size of the organisation that we have globally. We have about 35,000 in our infrastructure business and then that figure goes to 45,000 when you add on digital and cyber to that. So, 2,400 is not such a big figure in that context,” he says.

As change accelerates in the industry and more and more infrastructure being contemplated by governments around the world, demand is likely to be high for Jacobs’ new arrivals. The social benefit accrued from infrastructure development is now centre stage and in that light Jacobs’ recent move to acquire a 50% share in Simetrica, a UK-based organisation that specialises in social value measurement and wellbeing analysis, looks to have been a smart one. Under the new partnership, Simetrica will provide its cutting-edge expertise to increase existing capabilities and offerings in the areas of socio-economics, sustainability and environmental services.

“We think this will have a lot of benefit in the infrastructure sector. It’s going to be transformational. It also helps to entice people into the industry and also to retain them. People want to make a difference and change the world they live in,” Pragada says.

I finish by asking Pragada what key changes he expects to see in the industry in ten years’ time? “My optimistic view is that in ten years we have a real opportunity to change fundamentally the way we deliver infrastructure to the world and get it closer in line with those areas making a positive outcome,” he says. “What does that mean? Rapid solutions that rely on technology. Generative design. We are changing the face of our metropolitan areas as well as the globe with our data scientists. All of that points to a world where we have infrastructure that has the ability to change while the world is changing,” says Pragada.