DELIVERING A RECYCLING SUCCESS TO BAKU

The success of a recycling scheme in Baku, Azerbaijan, is being seen as a blueprint for achieving buy-in for waste management in all corners of the world, says Mott MacDonald’s David Dray.

On the morning of 10 July 2019, 60,000 households in Baku woke up to brand new, bright orange bins on nearly every street corner. Following a marketing campaign that lasted months, a fleet of vans had spent the previous night delivering the infrastructure necessary for the first (successful) recycling programme in Azerbaijan.

The Baku waste treatment contractor, together with Baku’s municipal authority, had tried to implement separate waste collection on two previous occasions in the old city and from a newly constructed walled village on the outskirts of the municipality, but neither attempt gained much traction. Although separate bins were provided for residents to sort their waste into, they were incorrectly used, and the contents of the recycling containers were indistinguishable from residual waste bins, making recycling near impossible.

When the team from Mott MacDonald was brought in in 2018, the waste management system in place consisted of a communal bin system where all municipal waste was collected in a mixed form. Small commercial outlets used the same bins as residential dwellings, while larger organisations had their own arrangements with commercial contractors. The waste from the residential parts of the city would primarily be taken to an energy from waste facility, where it was burnt, or to a manual materials recovery facility, where some metal and plastic was removed from the mixed waste stream.

The task set by the municipality was to develop a successful recycling programme that would start in one district of the city and eventually be rolled out to all 12. The idea, developed by Mott MacDonald, was to expand the communal bin system and introduce a new orange bin for mixed recyclable wastes and a green one for mixed residual wastes. Recyclable waste (paper, card, ferrous and non-ferrous metal, glass jars, and all types of plastic) would be transported to the existing materials recovery facility where it would be sorted and recycled.

As the previous attempts had shown, the success of the project would be determined by whether we could achieve the buy-in of the local people, in a part of the world where recycling and the separating of household waste is novel.

We worked closely with the city authorities to develop a marketing strategy. A televised advertising campaign was prepared to explain the scheme, and staff from Mott MacDonald were involved in numerous news items and press conferences to explain what was to happen and what was expected from the public. 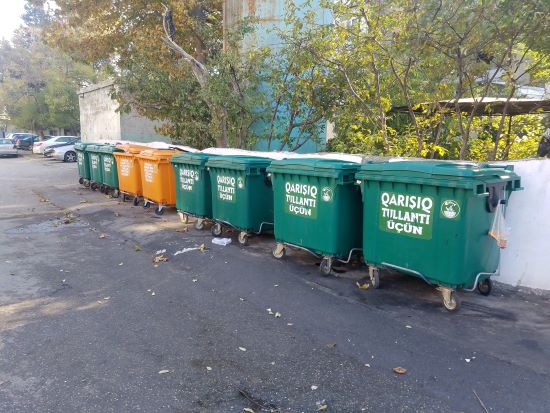 Alongside the media campaign was a door-to-door strategy that saw the recruitment and training of local people to knock on the doors of each of the 60,000 households, handing out leaflets, green and orange biodegradable bags and providing an opportunity for residents to ask questions. Once put into place, approximately 200 of the 461 communal bin locations were manned by a supervisor. This supervisor would be available to explain what materials could be placed in each receptacle.

In order to stand out, it was decided that orange would be the brand colour for recycling bins and it was important that this colour scheme was kept consistent across the whole city. It was used on leaflets as well as the fleet of trucks needed to transport the waste. This consistency meant that the bins were easily identifiable, and the public were able clearly see the changes taking place around them.

Other behavioural techniques included the placement of the bins themselves. The green bins (bins for non-recyclable waste) were made the easiest to access. This meant that those residents who hadn’t bought into the marketing campaign were less likely to dispose of their unsegregated waste in the orange bins, which would contaminate that waste and make effective recycling more difficult.

Two years later, and although delayed by Covid, the programme’s success means it is now being rolled out across more of Baku’s districts. Composition studies have shown that the programme is capturing up to 50% of all recyclable material, drastically reducing the waste that is burnt or sent to landfill.

We’re pleased to be able to report that, using data available from the European Commission, we can see that the new system is comparable with other communal systems that have been introduced and established in cities such as Prague and Bratislava, and is outperforming Bucharest. With respect to the capture rates for paper and card, plastic and metal, the system is even outperforming London. The scheme’s success gives us a blueprint for achieving buy-in for proper waste management in all corners of the world.

David Dray is a waste management specialist at Mott MacDonald.