CHANGE IN THE AIR, AS INDUSTRY LEADERS DEBATE FUTURE OF CONSULTANCY

Consultancy and engineering firms will need to step up to the plate and take more of a leadership position in the face of political uncertainty and instability, said ACE chief executive Hannah Vickers opening today’s Future of Consultancy conference in London.

Change was everywhere and affecting the industry here and now, said Vickers, particularly around new technology and the rise of digital. Many apocryphal stories were circulating about the future and what will become of the various players in the sector. “We want to get people inside and outside the industry to understand that we are not all going to be replaced by computers and to debunk the scare stories about the future of the construction industry,” Vickers said.

That’s not to say that technology won’t be a challenge in the future. It will. The sheer volume of data would increase in the industry, Vickers said, and there is much talk of disruption, offside manufacture and the rise of digital twins that will impact on the work of consultancy firms. However, technology was not the only challenge, she said. Political change would also affect the industry. “We are seeing more devolution and city mayors with much more influence on their local areas, so we need to have a closer relationship with these regional stakeholders,” Vickers said. Investors and financiers will also need to know how to navigate a changing industry. 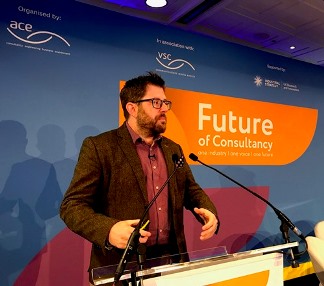 Vickers said that the consultancy and engineering sector would need to be more aware of the social impact of its work. “The expectations of us from society will increase as issues like climate change have an effect,” she said. “There will be much more of an onus on the industry to think of our social impact. So much of what we do is in the public interest, so we need to be aware of the image and reputation of our industry. Alongside all of this we have political instability, which creates its own challenges and will force us to take more of a leadership position on a range of issues.” The industry needed to be confident and ready for that responsibility, said Vickers.

Addressing delegates, Mike Pitts, director of Innovate UK, spoke about the £170m government initiative to transform construction. Pitts said his ambitions for this work were ambitious but achievable. “We are delivering a programme that we hope will act as a tipping point for the construction sector and we’re here to transform the way that the UK delivers buildings and infrastructure,” he said.

The conference also heard from Keith Waller, programme director for the Construction Innovation Hub, who highlighted his organisation’s work as a catalyst for the transformation of construction. “We are here to help deliver projects better across the infrastructure sector and that means better outcomes and more attention on how we use data and information across the whole project lifespan,” said Waller. Supporting better social and economic outcomes was crucial and engineers and designers would have a crucial role to play in that, he said.