The £120m redevelopment of Glasgow Queen Street is running on schedule as engineers hope to complete the extension of platforms by mid-June so that longer electric trains can use the station.

It’s all part of work to Scotland’s third busiest station as Network Rail looks to create more seats for passengers as space is made for longer eight-carriage trains and platforms are extended out towards George Square.

A new glass-fronted concourse, almost double the size of the existing space, is being built to accommodate the predicted increase in passenger numbers. The new concourse design is fully accessible with entrances on George Square, Dundas Street and North Hanover Street and is filled with natural daylight.

But from April 15 until mid-June, work will be taking place behind the hoardings on the main concourse to create new buffer end stops for the extension of platforms two, three, four and five.

Platforms two and three will be out of use throughout July while engineers complete the connection to the platform extensions and extend overhead lines, install coping stones, rebuild sections of platform wall and carry-out surfacing works. 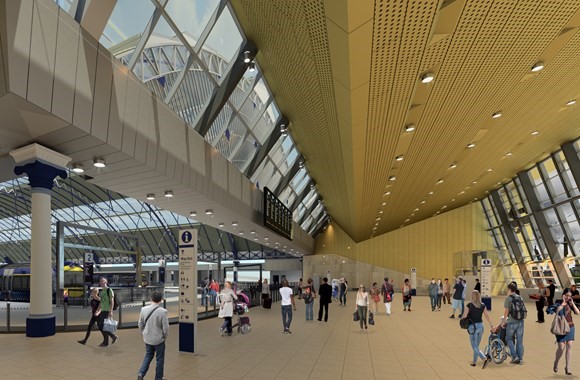 Bill Reeve, Transport Scotland's director of rail, said: “These forthcoming works mark another significant milestone in the delivery of this iconic station development. The Queen Street Station project is a key part of the Scottish Government's wider rail investment and, once delivered, will radically improve the gateway to the city and beyond. At the same time, it will provide faster, greener, longer services between Glasgow and Edinburgh, making rail an even more attractive travel choice for commuters and visitors alike.”

A further phase of work will take place between mid-September and mid-October to extend platforms four and five. The project is planned for completion by spring 2020.

Kevin McClelland, route delivery director for infrastructure projects, added: “The new-look station is beginning to take shape with the steel frame of the extended station building now in position and work underway to create the new concourse. Over the summer, our focus will also move back into the operational station area as we work to complete the longer platforms needed for the new electric trains which are now running on routes across the central belt.”