YOU ARE NOT ALONE

Since May 2020, SCS has been supporting employees, raising awareness, and preparing to offer roles to survivors of domestic abuse.

Now, prompted by the spike in reported domestic abuse incidents during the first Covid lockdown, this pioneering initiative has added another element to the HS2 contractor’s EDI programme, which combines a wide range of internal initiatives with legacy-building in boroughs along the London HS2 route.

The specialist organisations have helped mould the industry-first initiative, designed to be a model across all UK construction projects. The team at SCS hope it can set a new standard for the industry to address this sensitive and wide-reaching issue.

Laura Roche, equality, diversity and inclusion manager at SCS, said: “Our domestic abuse initiative has been a really valuable addition to our EDI programme. From the start, each scheme has been underscored by close collaboration with expert charities and partners. This means we have ended up with a programme that harnesses the relevant expertise while being tailored to the needs of the construction industry.

“We hope other organisations join our lead to make this standard practice across throughout the supply chain and across the sector.”

Safe spaces are a vital part of domestic abuse support initiatives. Consulting Hestia, a London-based charity supporting survivors of domestic abuse and modern slavery, SCS introduced a safe space across all 15 of their sites, where colleagues can speak confidentially with a trained nurse. Plans are in progress to trial a community-facing safe space on one of their sites soon.

SCS followed up their on-site safe scheme with an online safe space tool to address remote workers and core staff. Developed by Royal Mail and Hestia, the tool is now accessible from the home page of the SCS intranet and provides staff with a discreet pathway to local domestic abuse support services. It has a quick escape function and doesn’t appear in the user’s browsing history.

Sue Harper, head of domestic abuse prevention at Hestia said: “Since launching the Safe Spaces scheme, we have helped establish thousands of physical locations around the country, and more and more employers are installing the online tool.

“SCS JV have been incredibly ambitious in their approach and we welcomed their enthusiasm to create safe spaces in their working environment and online. We hope other similar organisations follow their lead.” 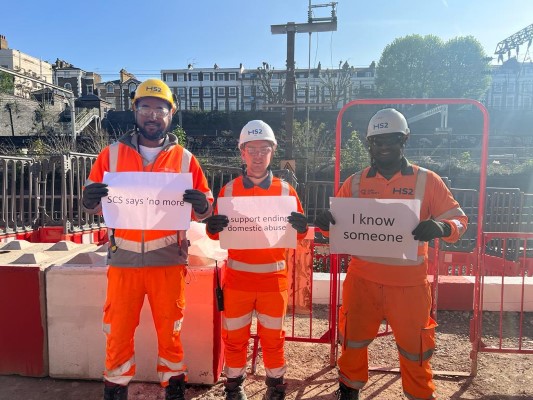 As well as safe spaces, the joint venture rolled out domestic abuse champion training to equip staff with the skills to detect domestic abuse warning signs and respond to sensitive disclosures.

In collaboration with Hillingdon Women’s Centre, SCS arranged training for staff and developed a guidance document to empower managers and champions to follow the referral process in case of a disclosure from a colleague.

Offering training to mental health first aiders on the project also meant tapping into an existing network of people with relevant experience who are already visible as points of contact for wellbeing concerns.

Reflecting the legacy-building drive of HS2, SCS has recently partnered with the Employers Domestic Abuse Covenant (EDAC), an organisation helping survivors of abuse get back into work.

SCS have begun offering opportunities through EDAC networks, and there are proposals to ringfence a certain number of roles for EDAC recruits.

Survivors of abuse can also benefit from Skanska Costain STRABAG JV’s return-to-work programme, which offers opportunities for people in many situations, including those whose careers have been impacted by abuse.

James Richardson, managing director of Skanska Costain STRABAG, was keen to point out the new initiative is an extension, not a departure, from their existing EDI schemes and value-led approach to construction projects.

He said: “We strive to be a project that holds our values at the centre of everything we do, and domestic violence is an issue which challenges us to reflect on these values. We want to talk about how domestic violence affects people’s lives, find ways to support our colleagues to stay safe and protected, and redefine what EDI best practice in the industry means.

“A positive outlook on what new initiatives can achieve and a willingness to make informed steps in the right direction can make a huge difference. Hopefully our model can offer a roadmap for others in the industry to follow.”

Eurocell in talks to build £800m Gigafactory in the Netherlands