The green recovery, identifying investable areas to build business certainty, the need for planning reform and the role of government in leveraging private investment in infrastructure were just some of the issues given an airing at the latest Infrastructure Intelligence Covid Recovery webinar on Friday 17 July.

Notwithstanding the key role that government has played in keeping infrastructure and the economy running during the current crisis, it is clear that the private sector pipeline will be crucial in ensuring that the construction industry has a plentiful supply of work. This webinar looked at the prospects for the future private sector infrastructure pipeline and the implications for firms working in the industry.

Ian Fletcher from the British Property Federation (BPF) talked about how the property sector had changed in the recent period and also highlighted the views of clients that BPF had surveyed recently. New investors had entered the market, especially in the student accommodation and build-to-rent sectors, he said. “Build-to-rent has reached out into the core and secondary cities around the UK - from Dundee to Swindon - which is a change from it being mainly concentrated in London in the past,” said Fletcher.

Fletcher also spoke about the BPF’s recent survey of 29 clients which revealed a “30% correction in spend” as a result of Covid-19. Generally, he said that BPF members were not investing much in retail currently and private offices was a challenging area. Hotels and student accommodation were understandably being very careful about their spend and cashflow, he said. Significantly, BPF members’ intentions on green infrastructure show that “no one is intending to cut spending in this area,” Fletcher said.

“This has been a health crisis with economic impacts,” said Fletcher, who thought that this indicated a key difference between previous economic crises. Going forward, he highlighted the importance of government creating a fiscal and planning regime that encouraged investment and enabled decisions to be made in a timely fashion. 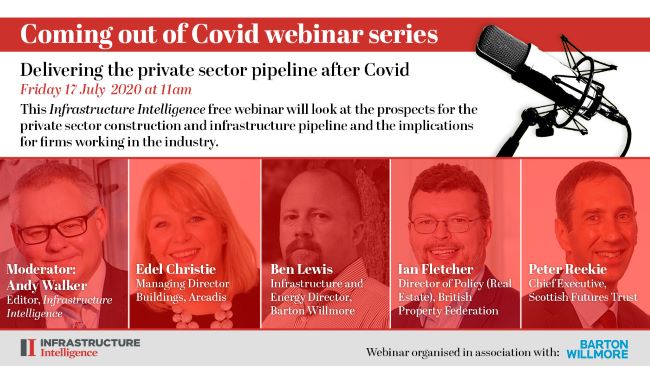 Edel Christie from Arcadis said that although she expected the private sector to bear the brunt of any post-Covid slowdown, it wasn’t all “doom and gloom” as changes to living and working patterns post-pandemic would lead to new developments in towns and cities across the country.

“Investors are looking to de-risk their investments,” Christie said and this would be challenging for all players in the industry as they come to terms with that approach. “A transparent approach to procurement and a new approach to risk was needed,” she said while predicting that areas of work that build future resilience would rise in importance. “Data centres and logistics - those industries and sectors globally are focusing clearly on futureproofing and will be more popular for investment,” said Christie. Identifying investable areas was key. “Where do people put their cash is a fundamental question and having clarity from government on those areas will be crucial in building industry confidence into the future,” she said.

Barton Willmore’s Ben Lewis said that climate change would play a key role in the recovery. “We can’t separate the climate crisis from Covid recovery. The Committee on Climate Change has said that we have a once in a generation opportunity to make the green investments needed and all of these will create new jobs and require private sector input,” said Lewis.

Lewis said that investment in renewable energy was a quick win and the prospects for this pipeline were very good, with costs coming down and the potential for up to £30bn investment into the economy from renewables in the coming period. “The UK is now in sixth place in EY’s renewable energy attractiveness index and we need to speed up investment in these sectors that involve emerging technologies with a proven record,” he said. “With the chancellor recognising the importance of green investment in the recovery with his recent retrofitting announcements, now is the time for firms to get more involved in the sector,” Lewis said.

Peter Reekie said the public sector needed to be at the table in the discussions about the private sector pipeline because there was a clear link between the two areas. “Resource and focus” were needed in the regulation arena, he said and cautioned against knee-jerk changes to planning and consultation legislation that weren’t necessary in the long run.

“Targeted government investment is crucial in leveraging private sector investment and this role of the public sector as an enabler is an important one for the future as it helps to ‘crowd-in’ private sector investment,” said Reekie. He also highlighted the coordination role of the public sector in placemaking as critical as this could open up priorities for investment and create more certainty in the market. Reekie also recognised that things weren’t simple with many stakeholders and issues to get to grips with. “Yes, things may be difficult but we need to embrace the complexity of it all to make progress,” said Reekie.

The panellists at the webinar did a great job with some really good insights giving those attending much food for thought. Having a robust and healthy future industry pipeline of work is something of paramount importance to the sector and so is how the infrastructure world is going to be affected by Covid-19 into the future.

It’s very appropriate then, that next week’s Infrastructure Intelligence Friday webinar is entitled “Infrastructure after Covid - what will it look like?”. That webinar will look at what kind of infrastructure we are likely to see in future and how priorities might change as a result of the pandemic. It’s a big issue and all those involved in our industry should not miss the debate next Friday.