The importance of taking a localised approach when engaging politicians, especially MPs, was highlighted by all the speakers at a recent Infrastructure Intelligence webinar on influencing government.

That was the strong message coming out of Influencing government and getting the industry's message across, the latest event in the autumn series of Infrastructure Intelligence Live webinars on 29 October 2021, which was organised in association with events and communications strategic partner, BECG.

The webinar looked at how the construction and infrastructure industry can better influence government and MPs to get their message across to decision-makers and was especially timely as it was taking place just as world leaders, politicians, NGOs and the business community were arriving in Scotland for the influential COP26 conference that starts next week in Glasgow.

Speaking first, Max Sugarman, public affairs and PR director at the Railway Industry Association, said that the industry needed to recognise and embrace the fact that it was working in a political arena and understand that it was essential to engage proactively with politicians. Sugarman said that he was proud to be seen as a lobbyist and that lobbying was an important activity for the industry to engage in. “We need to be clear and simple in our asks and relate what we are asking for to the interests of MPs, their constituents and the real benefits we bring as an industry to communities around the UK,” he said.

Civil Engineering Contractors Association director of external affairs, Marie-Claude Hemming, highlighted some of CECA’s work during the pandemic and the role of the Construction Leadership Council which she said was now undertaking work on a number of levels as a result of the connections and relationships made over recent months. “Our sector has done a lot better in the last decade engaging with politicians and the benefits of this can be seen by how integral the industry is now seen with ministers,” Hemming said. She also highlighted the role that dialogue with government had played in the moves towards recognising social value in the procurement process and the move away from lowest cost tendering, which Hemming said had allowed clients not to feel as constrained when tendering for work. 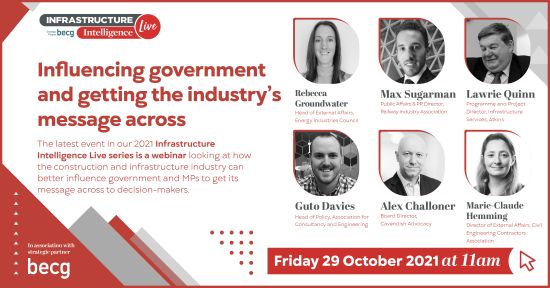 Lawrie Quinn, programme and project director, infrastructure services at Atkins and a former MP, talked about the importance of partnership and of the need to engage with politicians. “Very few members of our industry engage proactively with MPs and they need to,” he said. “You will find that if you make the effort to reach out to politicians, be they MPs or councillors or their advisors, then this will be welcomed and relationships can be built,” said Quinn. He also highlighted some of the briefing sessions that he had been involved and said that people should not feel daunted when engaging with politicians. “Don’t be overwhelmed by these people. They have a gap in terms of their knowledge and its’s important that  the industry makes contact – give it a go and your MP should respond,” he urged the audience at the webinar.

Becca Groundwater, head of external affairs at the Energy Industries Council (EIC), also highlighted the importance of building long-term relationships with politicians. “Relationship building is crucial and people should not be put off if what they are raising is not initially grasped by politicians – you never know when the political and business climate will change and it can shift at any time. Our job is to keep MPs informed about the issues and represent our members interests in a way that is attractive to opinion formers,” she said. Groundwater also highlighted how the EIC had conducted work through an industry taskforce that was set up to leverage opinion and create an “amplified supply chain”, which is something that other organisations could follow, she said.

Guto Davies, head of policy at the Association for Consultancy and Engineering, said that it was important to build trust in the relationships that are built with politicians. Part of this was to be clear about what you had to offer and how that would affect the people represented by MPs. “Time is precious for decision-makers, especially MPs who might not be in office for too long, so you need to be able to convey a clear and concise summary of a complex case will make more of an impact than those who don’t,” he said. The rule of thumb should be “the earlier the better” when approaching politicians, said Davies. “You also need to spend time mapping out your approach, especially in the local government arena,” he said.

Finally, Alex Challoner, managing director of Cavendish Advocacy, said it was important to bear in mind the political promises that politicians make and to hold them to account. “Root everything back to the party manifesto commitments as this is what they have promised to deliver,” he said. “Make sure that the key commitments are front and centre. Don’t hide your light under a bushel as ministers and key advisers will be interested in what you have to say. The emphasis put on brand UK plc is important and if you can assist in that and have a product or a service that can help then make sure you promote it,” Challoner said.

The importance of taking a localised approach when engaging politicians, especially MPs was highlighted by all the speakers. Alex Challoner particularly highlighted the importance of the government’s levelling up agenda in this regard, as this could lead to opportunities for construction firms to demonstrate the benefit they were providing to communities. “If you are based in areas that are important to the government, then do make sure you mention that and arrange site visits and discussions with MPs,” he said.