Transport for London’s boss Mike Brown has been accused of “diluting” and “downplaying” risks to Crossrail from an early stage with an independent reviewer believed to have pointed out concerns from as early as January 2018.

TfL’s commissioner is now being asked to “reflect on whether he is fit to continue to fulfil his role” at the organisation following the publication of leaked emails which suggest correspondence between him and the mayor of London was tweaked and edited with specific warnings cut out.

The London Assembly report published today entitled Derailed: Getting Crossrail back on track attempts to show failings and calls for greater transparency and tighter controls on TfL. Specifically requesting that all future board meetings are open to the public.

The paper believes it is necessary after Jacobs, an independent consultancy, warned of a “significant risk” or “high risk” to the opening by the Queen but the mayor was briefed that the December date was still possible.

The damning London Assembly report adds how Crossrail’s leadership “fostered an overly optimistic culture, where risks were largely overlooked instead of escalated” and “the completion date overpowered any professional scepticism or critical assessment of risk”.

Crossrail is a major programme to provide new rail services for London and the south east, running from Reading and Heathrow in the west, through 42km of new tunnels under central London, to Shenfield and Abbey Wood in the east.

Construction of the route is expected to cost £17.6bn after bosses revealed a £2.8bn hike in July last year. Crossrail was scheduled to open in December 2018 but is still not open today. New management is expected to say this month that the project could be delayed until 2020 or 2021.

The report, which analysed hundreds documents and took in hours of oral evidence from guests in public meetings, has detailed a range of findings.

Some of these findings include:

Minutes from board meetings also show how former bosses were reluctant to leave the organisation without bonus pay despite the fact they had failed to meet objectives.

Former Crossrail chief executive Andrew Wolstenholme is even said to have wrote a letter to the Remuneration Committee requesting a review of their decision not to release his Long Term Incentive Plan payment. Despite this, Wolstenholme was still paid performance bonuses of £641,000 on top of his £940,000 in wages during the two years from 2016. 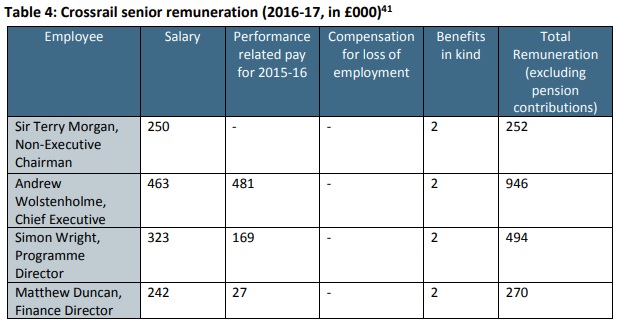 Caroline Pidgeon, chair of the assembly’s transport committee, has taken a swipe at top level management for failing to take any responsibility despite the fact they were “taking home eye-watering salaries and bonuses to deliver the project”.

“The evidence we have seen makes it clear that some officers at Crossrail and TfL attempted to warn about the risks to opening on time,” she added. “It is unacceptable that these risks were being downplayed by TfL commissioner, Mike Brown. The mayor and the TfL board have to have confidence in the commissioner and his executive team if they are to successfully deliver transport projects in the capital.”