RAIL NETWORK TO BE CENTRALISED BUT STILL MAINLY PRIVATISED

The government has announced what it claims to be the biggest shake-up of the UK’s rail network since privatisation in the mid-1990s, with the publication of the long-awaited Williams review and a white paper, now renamed as the Williams-Shapps Plan for Rail, to namecheck the transport secretary Grant Shapps.

Under the terms of the review, the rail industry will be simplified but still mainly privatised as a rebranded Great British Railways (GBR), which will control rail infrastructure and services under a new arm’s-length public body. Franchises will be replaced by contracts that will incentivise private firms based on punctuality and efficiency rather than raising revenue. As part of the reforms, the existing operator of infrastructure, Network Rail, will disappear.

GBR will own and manage rail infrastructure, as well as providing online tickets, information and compensation for passengers nationwide. GBR will also collect fare revenue, run the network and set most fares and timetables when it comes into existence in 2023. The government says that many reforms will come into force before then, including the introduction of flexible season tickets, which will offer savings on certain routes for people who do not travel to work every day. Such tickets will go on sale on 21 June and are expected to be popular in a post-Covid transport landscape.

Keith Williams, the chair of the Williams Review, said: “Our plan is built around the passenger, with new contracts which prioritise excellent performance and better services, better value fares, and creating clear leadership and real accountability when things go wrong.” The prime minister said that the review would “deliver a rail system the country can be proud of”.

Transport secretary Grant Shapps said that the railways had suffered from “years of fragmentation, confusion and over-complication,” adding “It's now time to kick start reforms that give the railways solid and stable foundations for the future, unleashing the competitive, innovative and expert abilities of the private sector, and ensuring passengers come first.”

The government hopes that the further centralisation of the rail network will streamline and simplify fares, including extending contactless and pay-as-you-go systems to more parts of the country. Shapps said that the new Great British Railways would “become a single familiar brand with a bold new vision for passengers – of punctual services, simpler tickets and a modern and green railway that meets the needs of the nation”. 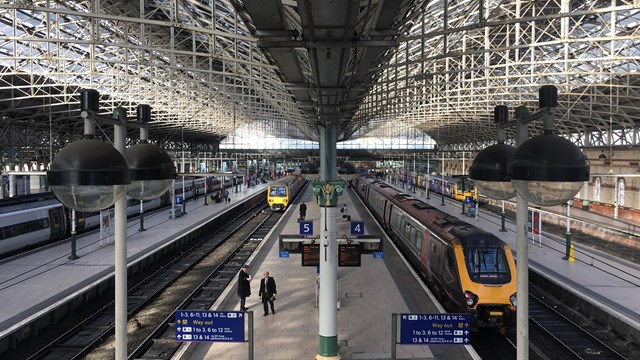 Commenting on the review, Maria Machancoses, CEO of Midlands Connect, said: “This raft of changes is what the rail industry and its passengers have been waiting for and if implemented correctly, could have huge benefits for travellers. By specifying timetables, service levels and operating standards, this concession model will reward operators for delivering what passengers want most – trains that run on time, friendly service and clean stations.”

Darren Caplan, chief executive of the Railway Industry Association (RIA), said: “As far as the RIA and our members are concerned, we are heartened that the new Williams-Shapps Plan for Rail is a 30-year strategy, which supports modernisation and investment along the lines of the RIA Rail 2050 manifesto we published in November 2019. As we argued then, it is right to take a long-term approach, in order to smooth boom and bust and provide more certainty for rail schemes, decarbonise and digitalise the network, deliver major projects, protect and create jobs, and foster innovation and collaboration between railway partners. We also welcome the ambition to attract passengers and freight back to the network and grow both markets.”

Andrew Haines, Network Rail chief executive, said: “Passengers deserve a reliable, affordable and sustainable railway, focussed on them. Today’s announcement will help us deliver that by simplifying the railway, paving the way to dismantle the legacy of complexity and fragmentation. Passengers and freight users will once more be put front and centre of a service designed and run for their needs.

“These changes will take time, but I am determined to get to work quickly with the industry and government. The pandemic has created significant challenges for the industry, and that means the changes we have to make are even more urgent. We must attract passengers back, deliver efficiencies and improve the service we provide. Today marks the start of an exciting new chapter for our railway, a chapter that puts the passenger first.”

Tim Wood, Transport for the North’s interim chief executive, said: “The north saw first-hand the effects of a fragmented rail industry during the 2018 timetable crisis. The fact that Great British Railways will bring track and train together as the guiding mind and put the needs of passengers first is a giant leap forward and something we’ve championed.

“This is a major national moment and a shift in how the railway is run. But this national approach must not be a missed opportunity for further devolution, giving the north’s leaders greater oversight of services and infrastructure investment to deliver more integrated regional networks that work for all. The commitment to growing and investing in the railway over the next 30 years only emphasises the real need for the government to publish the Integrated Rail Plan for the north and Midlands without delay, to give us much-needed certainty on delivery of major schemes like Northern Powerhouse Rail, HS2 and the Transpennine Route Upgrade.”