PUTTING PLACEMAKING AND COMMUNITIES AT THE HEART OF PLANNING

Clear placemaking vision and effective community engagement should be vital parts of the planning process, says the chief executive of the Royal Town Planning Institute.

The concept of ‘Total Planning’, with a clear placemaking vision and effective community engagement, emerged as a key theme in the latest Infrastructure Intelligence Live event on Friday 20 November 2020, organised in association with built environment communications specialists BECG.

An In the Spotlight interview with Victoria Hills, chief executive of the Royal Town Planning Institute, also emphasised the essential role of social value and continued industry collaboration if ‘building back better’ was to be an effective part of any post-Covid recovery.

Hills is one of the most high-profile women leaders in construction. Passionate about planning great liveable places, she has an unrivalled insight into London’s governance, having previously worked with all three London mayors.

In a wide-ranging conversation with Infrastructure Intelligence editor Andy Walker, Hills explained her initial motivation for planning and placemaking. “I’ve always been interested in people and places, and why places came to be where they are,” she said. “I specialised in transport and a passion for placemaking developed from there - a real passion for development and how things knitted together.” 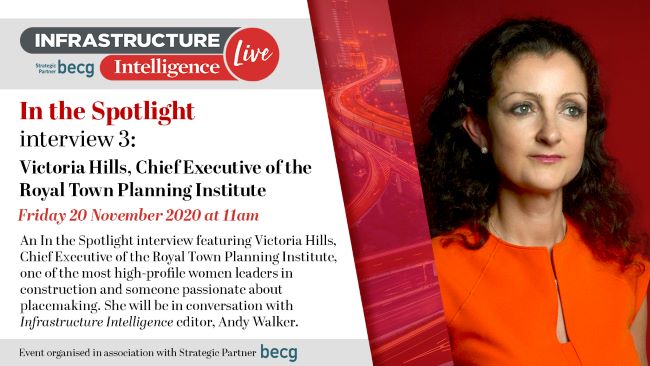 Outlining her own five-point plan for effective placemaking, Hills described her philosophy of ‘Total Planning.’ She said: “There’s five things to emphasise. You need strong political leadership, strong local leadership, with a chief planning officer at the heart of any decision making, proper resourcing with professional staff, vital funding in place and, perhaps most importantly, you need to have the community on board with your plans. All five together are vital for effective placemaking,” Hills said.

Describing the overhaul of the “outdated planning system” that the government announced in the summer, Hills said: “I don’t think I’ve seen planning higher on the political agenda than it is at the moment. There’s a big culture change on the table here. We’ve made it very clear that recent planning successes have been delivered within existing frameworks and we’re happy to work with the government, but we’re making the case for proper resourcing and implementing change rather than any ‘big bang’ change.”

Asked whether the government’s current proposals were joined up enough, Hills replied: “We’ve currently got a strongly centralised strategy, but what about the bit in the middle? What we really need is to bring all the players together – local, regional, transport, housing, environmental – to pull all the infrastructure together and get the strategy right. It’s about getting the right people around the table and getting things done,” she said.

The government’s stated intention to build “faster better, greener” sounds great, but how can the planning system support that? “Where there’s a will there’s a way,” said Hills. “There is an urgent need to get on and provide much more social housing. There’s a huge opportunity to focus on building the right homes in the right places, but we need more ambitious targets and policy to deliver homes to meet net zero. And making sure that including social value into procurement that saves billions of pounds down the line and improves people’s lives would make so much sense,” she said.

Having a clear placemaking vision with strong social value and effective community engagement were also positive lessons for the industry to carry forward from Hills’s previous role as CEO of the Old Oak and Park Royal Development Corporation. “Putting a place-based vision right of the heart of the project – the need to get everyone on the same page from the get-go is vital. Trying to get infrastructure right at the heart of any project right from the outset,” she said.

“The business case is a lot more robust and scrutinised now – it has to maximise the benefits of jobs, homes and communities, rather than just cost benefit ratio. How you value things is going to be a game-changer. Added value and placemaking is increasingly important. Invest properly and you can save billions downstream.

“It’s an exciting time and everyone can win if they work together,” she said.

Click here to watch a recording of the interview with Victoria Hills.