Tech company ALICE Technologies’ vision is to help reduce the cost of construction by 25% globally. Andy Walker spoke to René Morkos, ALICE’s founder and CEO, to find out more about their work.

ALICE is an AI-powered construction simulation and optimisation platform that helps to easily create, explore, and update construction schedules that reduce risk while cutting construction costs by 11% and build time by 17%. Founded in 2015, based on research from Stanford University, ALICE Technologies works with construction leaders across the infrastructure, industrial, and commercial construction sectors. Its founder and CEO René Morkos, an experienced civil engineer with years of experience in the industry, is an enthusiastic advocate of the transformational role that technology can play in changing the face of construction and what the industry delivers.

“ALICE is the world’s first generative construction simulator – so what is that you may ask? The way I like to explain it is let’s say you want to draw a cylinder or a pipe in 3D and then you want a smaller or larger cylinder then you have to redraw it every time. With generative or parametric tools you can generate lots and lots of options automatically. ALICE does this quickly and this simulation allows you to figure out faster and better ways to build something,” Morkos says.

The ALICE platform is helping some of the world's leading contractors to solve their most pressing construction challenges enabling them to submit bids with confidence, make better data-driven decisions and to ultimately deliver projects faster and cheaper. “Construction hasn’t seen a serious innovation in about 60 years and the way projects have been managed has been effectively by hand,” says Morkos. “But in 2021, we are now in a position to apply technologies like artificial intelligence and machine learning to the construction process and that is exactly what we are doing,” he says.

Such an innovative approach can save 17% of time and 11% of construction costs on projects, Morkos explains, and that’s why construction companies want to use ALICE. Applying the power of AI to construction projects is the future as far as Morkos is concerned, though he understands why the industry has been reluctant to adopt its use in the past. “The reason why there has been a historic reluctance to go down this route is that a lot of people have been burned in the past as a result of poor software and solutions that have promised heaven and high water but didn’t deliver,” says Morkos.

“The beautiful thing about innovation though is that it’s available to everybody and we are seeing people innovate, take risks and apply these technologies and techniques. Construction is going through an incredible renaissance right now, where there is a new ecosystem that is getting developed in our field. What’s going to happen to construction today is what happened to manufacturing back in  the 1970s and 1980s. We are becoming a highly sophisticated sector and that is happening as we speak,” Morkos says. 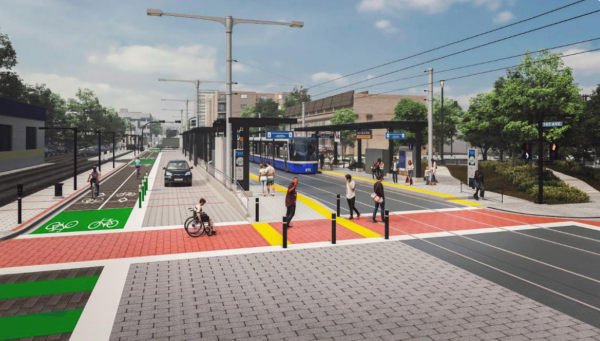 Companies using ALICE software are able to build faster and more cheaply and ultimately more efficiently. This also means reducing risk and the software enables them to do this. Companies like Parsons are benefiting from working with ALICE on the $2.6bn Edmonton rail project (pictured above) and the Hawaiian Dredging Construction Company has deployed ALICE on projects to enable them to manage them better.

Morkos says that he was driven to create ALICE as he felt that construction was lagging behind other sectors in its application of technology and he wanted to do something about that. “I have bet my entire career on changing that,” he says. “I have focused on changing the impression that other people have of construction by the application of technology and algorithms that enable us to work better,” he says. Morkos is a strong advocate of getting people to view construction as a hi-tech sector that people want to work and make a career in. Rather than surfing the wave of change running through the industry, he says that he wants ALICE “to be part of what’s creating the swell” and to work with others in the sector who feel the same way.

Looking ahead, Morkos sees the digitisation of the construction supply chain as crucial. “Our mission statement is to reduce the global cost of construction by 25% - that’s 25% less emissions, 25% more people can afford a home, 25% of people can afford access to infrastructure and so on. Being able to provide infrastructure and modern facilities to communities is something that drives me and being part of all that is an incredible journey to be on,” he says.

It’s clear that the concept of changing people’s lives for the better through delivering better infrastructure is a key driver for everything that Morkos and ALICE does. “With most of the people I talk to in our industry, that is what drives them too,” he says. “This is an industry that builds most of the world’s fixed physical assets and everything that you call life has infrastructure at its heart. ALICE is part of making that better and helping the people in our industry to deliver better, more effectively and efficiently,” says Morkos.

Morkos’s enthusiasm is infectious and leaves you wanting to find out more about the man himself and also ALICE Technologies. You might not have heard of them yet, but my bet is that you will soon enough and I have no doubt that he and they will be making waves and making a difference in the UK construction sector in the months and years to come.