The lucrative contracts to deliver landmark London HS2 stations have been revealed with a Mace-led team awarded the work for Euston station, while a Balfour Beatty joint venture has landed Old Oak Common.

The news comes a day after the release of the latest design images for Old Oak Common, where HS2 meets London’s Crossrail line.

The joint ventures announced are:

The station construction partners will be responsible for working with HS2 Ltd and the station designers, to coordinate the delivery of the station, including platforms, concourse and links to the London Underground and other rail services.

The joint venture between Mace and Dragados fought off competition from the Costain/Skanska consortium while the Balfour Beatty JV was preferred to BAM Nuttall/Ferrovial Agroman bid.

Commenting on the station decisions, HS2 chief executive Mark Thurston hailed both Mace/Dragados and Balfour Beatty/VINCI for their “strong track record of delivering some of the world’s most challenging and exciting infrastructure projects”. 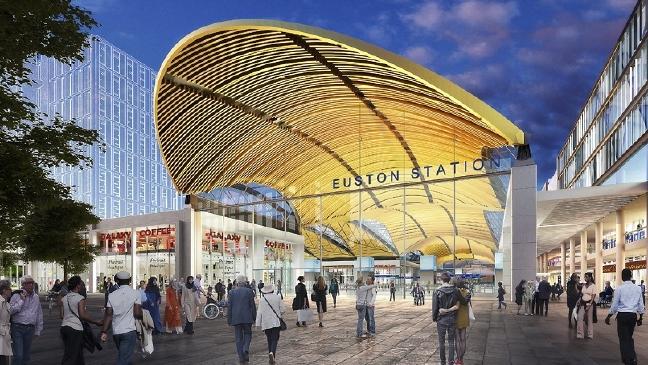 He added: “Euston and Old Oak Common are two of the most important elements of the project – two landmark stations which will help unlock tens of thousands of jobs and new homes across the capital. Together with our Birmingham stations, they will transform the way we travel and set new standards for design, construction and operation.”

Jason Millett, Mace's chief operating officer, says the firm is delighted to be delivering the £1.5bn transformation of Euston.

"HS2 will transform Euston, delivering much-needed extra capacity and better journeys for the 44 million people that use the station every year," Millett said. "Mace's experience across the whole property life-cycle and other major infrastructure projects alongside Dragados's world-class high speed rail expertise will fully be brought to bear on this complex project of national importance. Working closely with the HS2 team, we look forward  to working with local people and wider stakeholders to ensure that this project is delivered as effectively, efficiently and safely as possible.”

While Balfour Beatty and VINCI have experience of some of the world’s most complex construction projects, including the new Tours-Bordeaux TGV, Thames Tideway tunnel and the London 2012 Aquatics Centre.

HS2 Minister Nusrat Ghani added:“Euston and Old Oak Common will be catalysts for real change and regeneration, driving forward growth in their local communities while providing better journeys for passengers. I am confident that these leading construction firms will deliver iconic stations that are safe, accessible and open to all.”

HS2 will more than double capacity at Euston, to deal with increasing passenger demand while freeing up space on the west coast mainline for more freight and local and long distance commuter services to places like Watford and Milton Keynes.

Designed by a team led by WSP and architects, WilkinsonEyre, HS2 say Old Oak Common is set to be the UK’s best connected rail interchange, with an estimated 250,000 people passing through every day.

Six 450m platforms will be built in a 1km long underground box, with twin tunnels taking high speed trains east to the terminus at Euston and west to the outskirts of London.

It is expected to kick-start the UK’s largest regeneration project, which aims to transform the former railway and industrial area, into a new neighbourhood supporting up to 65,000 jobs and 25,500 new homes.