Key legislation needed to ensure spades go into ground for construction of the northern link in the HS2 project is to be pushed back by a year, it has been reported.

Transport secretary Chris Grayling said last summer that the tabling of a bill in parliament for phase 2b running from Crewe to Manchester, and Birmingham to Leeds would take place next year.

But according to the Times, the government is set to halt this until at least 2020. While the Department for Transport (DfT) has not attempted to deny it, a spokesperson has said it is important to make sure a full account of the Northern Powerhouse Rail scheme which aims to improve east-west rail connections across the region.

“Phase 2b of the railway will connect the great cities of the North to boost jobs, housing and economic growth, and remains on track to open in 2033. We will update parliament as part of our consultation this autumn,” the spokesperson said.

The HS2 project plans to create 330 miles of new track linking London, the West Midlands, Manchester and Leeds. The first phase between London and the West Midlands would carry 400m-long trains with as many as 1,100 seats per train. Operators say they would travel at speeds of up to 250mph - faster than any current operating speed in Europe.

This would be followed by a V-shaped second phase taking services from Birmingham to Manchester and Leeds. The Department for Transport says there will be almost 15,000 seats an hour on trains between London and the cities of Birmingham, Manchester and Leeds - treble the current capacity.

The report comes on the day Labour leader Jeremy Corbyn lambasts the government for having an "utter disregard" for commuters in the north of England as he travels on the Northern Powerhouse Rail route to speak to passengers and gauge their views. 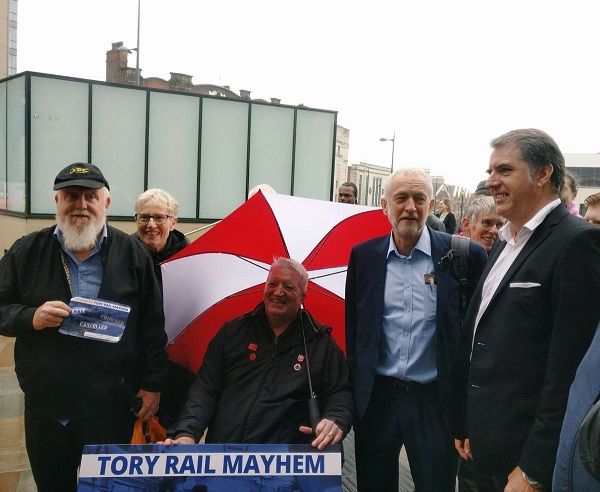 The opposition party has reaffirmed its plans for public ownership of rail in a bid to boost infrastructure investment in the north. Labour says it will commit at least £10bn to Crossrail for the north.

The party has released analysis attempting to show the creaking services in the north as holds its National Rail Campaign Day. Using DfT data, the party claims the proportion of passenger trains arriving on time has dropped from 91.5% in 2010 to 87.8%. While the proportion of passenger trains across the country that were cancelled or significantly late has risen by 50% since 2010.

Commenting on the rail network in the north, Corbyn said: “The rail chaos unleashed by the Tories on the north of England shows their utter disregard for people living in the towns and cities in the north. For decades northern communities have received only a fraction of the transport investment that is spent in London and the south east. Labour will put this right by building Crossrail for the North, connecting the great cities of the north of England to unlock huge untapped potential.”

Andy McDonald, Labour’s shadow transport secretary, added: The overcrowding, delays and cancellations on our railways is fast becoming a national disgrace thanks to the Tories. With fares up set to go up by 36% since 2010, it’s clear that passengers are paying more for less under the Tories. The government’s blind obsession with privatisation is putting the future of the railway at risk. Labour will do what’s best for passengers and taxpayers by taking the railway back into public ownership in order to improve services and cap fares.”