Undoubtedly one of the most important and high-profile people in the UK construction sector, Sir John’s career spans a number of high-profile roles including chairman of John Laing, chief executive roles at Costain, Railtrack and Network Rail and chairman of the Olympic Delivery Authority, the body which successfully built the venues, facilities and infrastructure for the 2012 Olympic Games. Armitt was also chief executive of Union Railways, the company responsible for development of the high speed Channel Tunnel Rail Link from 1993 to 1997. He received a CBE in 1996 for his contribution to the rail industry and a knighthood in 2012 for services to engineering and construction.

Looking back at his early career, it was the potential to make a difference in peoples’ lives that first attracted Sir John to the industry. “I decided I was going to leave school at 16 and I got a leaflet from the Institution of Civil Engineers, which described engineering as harnessing people’s talents for the good of minkind. So, with that and the thought of an outdoor life and the opportunities to travel the world, I enrolled at Portsmouth college and four years later joined John Laing.”

Describing the best argument he’s heard for attracting young people to join the sector, Sir John said: “We take infrastructure for granted because it’s part of everyday lives. But what the industry does is provide the underlying ingredients of civilisation. Without the basics including water, sanitation, power and transport, society doesn’t work.

“Working for the good of society - and that includes meeting the challenges of climate change - engineers, designers, everyone in the industry has a part to play in achieving net zero. The industry is at the heart of everything that needs to be done.”

Asked how engineers could raise their profile, he said: “It’s a major challenge. We’ve previously focussed on how we build, but we need to focus more on why we build. Everyone, politicians and the industry itself, has a responsibility to get out there and explain what we do.”

Describing the impact of the Covid pandemic on the industry, Sir John said: “The increased collaboration across the industry has been vital, but without our digital infrastructure and communications we would have been in even more trouble. Technically, we’ve advanced three years in six months. Out of this setback there’s an opportunity for the industry to work better and become more efficient.”

He added: “It’s early days. We’re looking at a range of behavourial changes in society. Are we going to need as much transport for example? A new digital world will see more people working from home. We’ll have to see how far behavioural change goes, but change will be gradual. The challenge for the industry is making decisions for fifteen years ahead, so planning ahead will not be easy.”

On the UK government’s much heralded ‘Build, build, build’ agenda, Sir John said: “The government clearly see investing in infrastructure, and encouraging the private sector to invest, as key elements of getting the economy moving. It’s part of their levelling up agenda - seeing a physical manifestation of the economy moving again. But levelling up is also about increasing connectivity and investing in skills – training and retraining are both vital elements of that.” 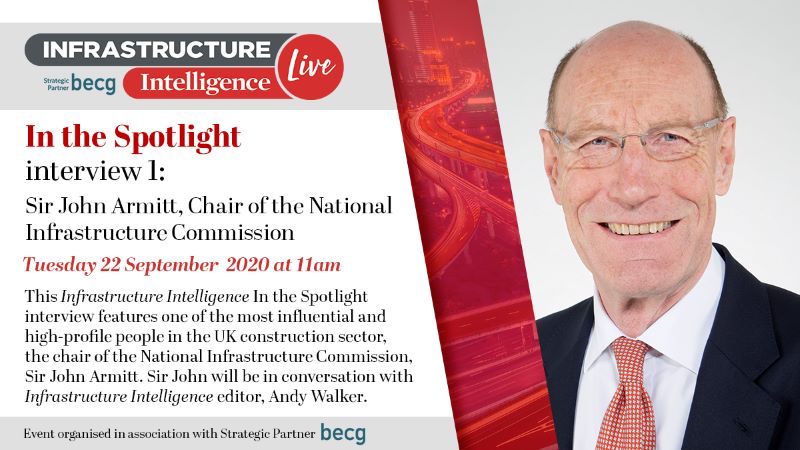 On the need for political rhetoric to be backed up by policy and long-term strategy, Sir John said: “Very simply, there is no infrastructure without politics. Whether that’s in the public sector, which the treasury pays for, it’s clear that politicians ultimately decide what projects to take forward. The private sector works under regulators, but the regulator is answerable to government, so politics, and certain levels of tensions, will always be there.

Looking back at his role on delivering the 2012 Olympics, Sir John said: “Ken Livingstone (London mayor at the time of planning) wasn’t a big sports fan, but he saw the Olympics as a fantastic regeneration opportunity for east London – and it’s proved to be a phenomenal legacy for that part of London. The Olympic Park has been a great example of lifting people’s lives. It was an investment for six weeks of sport that built a community and environment that will thrive for the next 60 years or more.

“I was interviewed a few years after the Olympics and was asked which building was best. I said: ‘actually it’s the landscape’. What we’d created was a fantastic place. Some great buildings, but overall a fantastic place including housing, parks and communities – a great environment.”

Continuing the theme of social value, Sir John said: “It’s important to think about social value right at the very early stages of a project. Speaking and engaging with local communities is a great opportunity to talk to local people about what you’re doing and also, vitally, to listen to their concerns and ideas. You’ll never convince everybody, but you can involve people and communities in delivering positive results, so good public engagement is key to demonstrating and delivering social value to the communities we serve.”

Looking back at his distinguished career, Sir John described his involvement in Network Rail and the 2012 Olympics as the two proudest moments of his working life. “Being part of the Network Rail family, providing public service every day, was something very challenging but I was very proud to be involved and play my part in that.” he said. “And I couldn’t help but be proud of what Britain did in delivering the Olympics. It created a brand-new place in a very collaborative way.”

Finally, asked if he had a magic wand to make one key change to the infrastructure sector, Sir John highlighted the positive spirit of industry collaboration.

“I’d come right back to the theme of collaboration,” said Sir John. “Collaboration needs to be open all the time between all sectors – clients and industry working together. That means more honesty and collaboration in a very specific and honest way,” he said.

Infrastructure Intelligence editor Andy Walker said: “As ever, Sir John was always interesting, authoritative, engaging and knowledgeable on all matters infrastructure. And it’s typical of the man, with his approach and incredible career achievements, that he stressed the vital importance of collaborative working across the industry as being critical to future success.

“It was another enjoyable part of our brand-new autumn series of Infrastructure Intelligence Live events and I’m looking forward to the rest of event series over the coming months.”

Click here to watch the interview with Sir John Armitt.