The chancellor Rishi Sunak wants businesses to hold on to their staff and people to start spending as this is the only way the UK can avoid a long and severe recession, says Julian Francis.

As the chancellor sat down in the House on 8 July, it was clear that between his announcement and that of the prime minister last week the government thinks that is has done its bit to shore up the economy and it is now up to the rest of us to do our part.

The challenge that confronted the chancellor was how to stop rising levels of unemployment. To which the answer given was to prevent mass unemployment he needed first to give employers the confidence to hold on to staff and second to provide workers with a reason to keep spending. As one feeds off the other, the strategy always had to be two-pronged - to support jobs and consumer spending.

But the unspoken side of this plan was that if the government gave assistance to the private sector to secure their cash positions and work pipelines, then employers must respond by not making their staff redundant at this time. In fact, far from laying off staff, they should be creating more jobs with the government subsidising 400,000 trainee positions through the ‘Kickstart’ fund.

In all, Sunak has stated that he is prepared to spend as much as £30bn by the time you include the other measures he confirmed - cuts to stamp duty, VAT in the hospitality sectors down to 5% and a scheme to create jobs for young people that might have a price tag of £2bn. Spending on infrastructure was accelerated too and don't forget an ‘eat out to help out’ scheme, where customers will get discounts on their social life.

A big win for ACE has been the announcement of the Construction Talent Retention Scheme that has been championed by us at the Construction Leadership Council as a way of protecting the industry's talent. Operating in the same way as the similar retention schemes in the automotive and aviation sector, this new scheme will allow a more effective distribution of talent around the industry thus securing vital skills for the future.

Alongside the announcement by the prime minister last week of a £5bn acceleration in the pipeline that will benefit the building and refurbishment of our schools and hospitals, it was a welcome news to see a £2bn green homes grant which will provide each home in the UK with £5,000 to spend improving their home’s emissions standards.

We also saw a public sector decarbonisation fund established to help public sector estate owners to fund energy efficiency and low carbon heat upgrades. This has the potential to generate significant work, as it is new funding requiring public sector bodies to bid for it. This scheme will be supported by a social housing decarbonisation fund providing a £50m pilot to trial landlords making social housing more energy efficient and a brownfield housing fund of £400m aimed at helping mayoral authorities to bring forward land for development, which could also provide the industry with new opportunities to assist with feasibility studies funding allocation.

It is the next few months, the period when the furlough scheme is being wound down, that is critical. The evidence from other countries is that many see an initial burst in activity as lockdown restrictions are eased but the economy then enters a second phase when the recovery slows down. 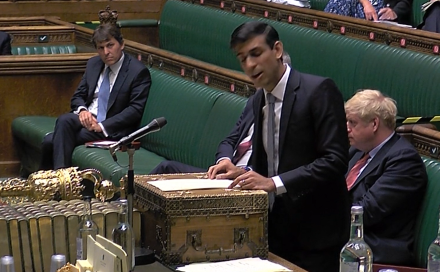 The UK is about to enter this period, and the justifiable fear of the government is that businesses will start to lay off staff in large numbers between now and the end of the furlough scheme in October. Sunak has resisted calls to extend the furlough scheme or make it sector specific, but instead is offering businesses a £1,000 job retention bonus for every worker kept on until January. He is now keen to do all he can to stop or at least delay these planned layoffs for as long as possible.

The big question that remains, however, was the one that Sunak raised on The Andrew Marr Show last month. “Are Britons ready to go back to the restaurants and pubs?” he was asked. “It’s whether they have the confidence and the psychology ... are the animal spirits [present] for us to get back to our high streets in the way that we used to?” he said.

The chancellor feels that he has done his bit to instil the confidence that Britain needs to keep the spending taps open, but he knows he can do nothing about the deeper fears around safety. If people are scared, if they do not spend because they fear for their jobs or if there is an increase in infections, Sunak knows his efforts will be neutralised.

The chancellor has done what he can. He is now hoping the rest of us can rise to the challenge by doing our bit. His message to our industry is to “Keep Calm and Carry On” as there is a pipeline of work to provide us with confidence. In return he is asking us to hold on to our staff and not hoard our cash as this is the only way the UK can avoid a long and severe recession.

Our future, it seems, lies very much within our own hands.

Julian Francis is director of external affairs at the Association for Consultancy and Engineering.