BRILLIANT AND ESSENTIAL BOOK ON HOW STUFF GETS BUILT

The latest book from Roma Agrawal takes a behind-the-scenes look at some of the world’s most incredible structures. Infrastructure Intelligence editor Andy Walker reviews it here.

Inspirational engineer, author and broadcaster Roma Agrawal’s latest book, How Was That Built?, is aimed at children and explores some of the world’s amazing structures across seven continents.

The book, published this week on 16 September, outlines, in Agrawal’s trademark accessible, entertaining and easy-to-understand style, the forces that act on structures and how to resist them, what materials keep structures strong and how to make them tall and stable, how to build underwater and even on the moon and highlights the stories of some of the amazing engineers who created the world in which we all live.

How was That Built? does much more than that though. It really is an accessible, interesting and exciting description of how structures are built and how construction works and anyone reading it - young or older, but especially the young – cannot fail to be inspired by the fascinating world of construction that literally changes people’s lives with its achievements.

Using examples from around the world, Agrawal shows how to build structures that are flat, tall, long, clean, strong and stable. The examples she uses include the Metropolitan Cathedral in Mexico City, which sank and tilted because of the ground it was built on (Mexico City was literally built on a lake). She explains how, in the 1990s, engineers had to save the structure using methods that have since been employed on other projects around the world. 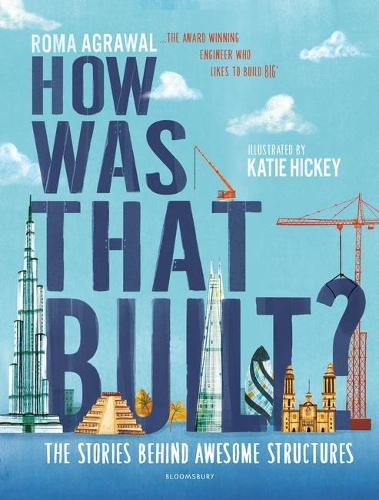 Other examples she uses include the Shard (on which she worked), the Brooklyn Bridge (a project on which the engineer Emily Warren played a key role), London’s sewer system, the Burj Khalifa in the UAE, the Katse Dam in Africa, Thames Tunnel, Sapporo Dome in Japan and the Halley VI research station in Antarctica. The book is illustrated beautifully throughout by Katie Hickey’s wonderful art which bring Agrawal’s engaging engineering descriptions to life.

The book provides an exciting behind-the-scenes look at some of the world’s most interesting and incredible structures from skyscrapers that reach beyond the clouds to massive bridges spanning the widest rivers. Agrawal is always interesting and interested in the ingenious ways that engineers tackle big challenges and through the pages of her book readers get to meet the extraordinary people who have transformed the landscape of the globe and the way we live.

How Was That Built? is a brilliant and essential book and I hope it receives a wide circulation amongst its target readership and beyond. Hopefully schools and libraries will purchase the book in big numbers because it deserves to be widely read and discussed. I also think it will do a lot to encourage young people to consider a career in construction.

As Agrawal says in her introduction: “Once you read this book, you’ll see the world through different eyes – the eyes of an engineer.”

Click here to order How Was That Built? The Stories Behind Awesome Structures on Bookshop.org for £13.94.