A GOOD COP, BUT THE PACE OF CHANGE NEEDS TO INCREASE

The recent COP26 climate conference was put under the spotlight at the Good COP, bad COP online event, the latest webinar in the autumn series of Infrastructure Intelligence Live webinars on 26 November 2021, organised in association with events and communications strategic partner, BECG.

The webinar looked at the discussions and outputs of COP26 and what these mean for the construction and infrastructure sector in the company of a strong line up of panellists, all of whom attended the COP event in Glasgow. Panellists included Clare Lavelle, Scotland energy leader at Arup, Denise Bower, group external engagement director at Mott MacDonald, Tom Bradley, associate director at Cavendish Advocacy, Zoe Haseman, vice president for global sustainability at Jacobs and Ioana Price, senior structural engineer at AECOM.

Speaking first Clare Lavelle, Scotland energy leader at Arup, said: “We are moving the dial towards net zero at a painfully slow pace. We are not on track, but the Glasgow Climate Pact puts us on track for 2.4 degrees. Scotland has demonstrated that transition can be achieved and is economically sustainable, with 97% of energy from renewables.” Lavelle said the work of “early adopter nations” was crucial and highlighted the crucial role of hydrogen in the future of energy. “Hydrogen has the potential to play a role in a range of areas and the potential to complement existing energy supplies,” she said. “We also need to reach a tipping point where low-carbon solutions no longer need subsidies to make them viable,” Lavelle said.

She also highlighted the need for full lifecycle assessments to be undertaken on all projects and spoke about Arup’s commitments in this area. Lavelle also called for a greater focus on “building back better” and developing a green economy. “We can’t be too parochial, we need to work together with global nations and ensure that developing nations are creating new markets,” she said.

Mott MacDonald’s group external engagement director Denise Bower said that following COP26 she thought that the direction of travel around net zero was positive and there was some progress made. “One of the features of COP26 was the growing engagement of actors other than national leaders – city leaders in particular,” she said. “This was a big positive as was the focus on improving the resilience of infrastructure in dealing with the physical impacts of climate change. The role of engineers in designing this in was a very positive development. We need to be upbeat about the role that engineers can play,” said Bower. 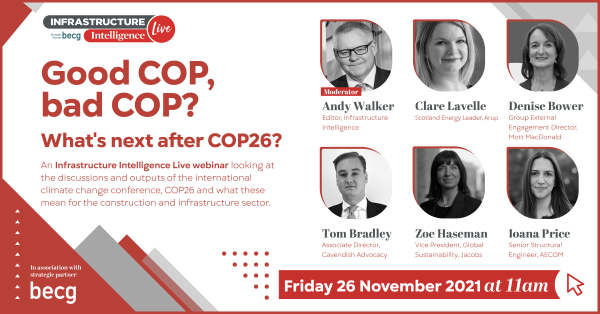 Bower also said that it was disappointing how quickly COP 26 has faded from the national agenda following wall to wall media coverage. She hoped that the construction industry in particular would keep the issue of net zero in the public eye and also stressed the need for a more joined up approach to addressing climate change and one where the issues were explained using basic and straightforward language. “Education is so important around these issues and informing people about the impact of the choices that we make in our daily lives. We also need to see more alignment in our actions to address climate change and to be clearer about the destination where we need to go,” said Bower.

Tom Bradley, associate director at Cavendish Advocacy said that some of the smaller deals done at COP26 by smaller nation states were a success and a credit to UK diplomacy. “It was really encouraging to see the extent to which the UK got together and adopted COP as our own. The message going back to Westminster and Whitehall is that the UK is ready to deliver on net zero and that the UK can be a world leader in this. Now we just need the political, regulatory and policy frameworks in place to make it all happen,” he said. Bradley also highlighted that the infrastructure sector would be front and centre in the journey to net zero and that the industry was set to benefit from a lot of government policy coming down the line on the green economy, including in areas like hosing and green energy.

Zoe Haseman, vice president for global sustainability at Jacobs, said that she was particularly pleased to see the increased focus on nature as a key theme of the conference. She also thought that from a business perspective there was a lot more clarity coming out of COP26. “Net zero is the direction of travel, everything is linked to that and it’s clearer than ever that this is a key driver for all industries and sectors going forward,” she said. “The loudest message from COP was around implementation and the need to take action now. Young people in particular are calling for action now and this was also reflected at the conference itself. We need to better understand about the achievability of the targets and aims that have been set and ensure that these are met – and the role of digital will be crucial going forward in achieving that,” Haseman said.

AECOM senior structural engineer Ioana Price said that her key takeaway from COP26 was that people were passionate about making a difference. “This was really positive and energising and seeing the willingness of people to work together to come up with solutions is massively encouraging for the future,” she said. “But we need to see action now and start talking about issues like embodied carbon, which has been missing in most of the discussions so far around buildings. It is essential to discuss this if we are to meet net zero,” said Price, who was also encouraged that the built environment’s role in achieving net zero was now being talked about more and more. “This is a big win for the sector. Governments are moving too slow, but the industry is not and tools and methodologies are being developed to help us make real progress,” she said.

Overall, panellists at the webinar were largely optimistic as a result of COP26 but at the same time they wanted to see more from governments, both here in the UK and internationally. All recognised the crucial role to be played by the construction and infrastructure sector in achieving net zero and said the issue would be an ever-present consideration in their work going forward.

Click here to watch a recording of the Good COP, bad COP webinar.