YOU HAVE A SYSTEM YOU CONTROL, SO FIX THAT SYSTEM!

The construction industry needs to radically change the way it works to address gender, inclusivity and diversity issues to better reflect the society it serves, according to leading industry influencers at a hard-hitting Infrastructure Intelligence webinar on Friday 30 April 2021.

Tackling systemic discrimination from an early age, highlighting engineering as a positive career choice to girls while still at school, engaging with and listening to diverse communities to influence future generations and clearing the way to a more inclusive leadership were all flagged up as vital ways for the industry to help drive positive change.

Hosted by Infrastructure Intelligence editor Andy Walker and organised in association with Events and Communications Strategic Partner, BECG, the webinar on diversity and inclusion in the construction sector could not have been more timely, coming just weeks after a government-commissioned report controversially found that the UK “no longer” had a system rigged against minorities and was accused of ignoring black and ethnic minority people's concerns.

The construction sector has particular challenges around diversity. As reported on the BAME in Proprty website, 14% of the UK’s population classifies as BAME but only 1.2% of the built environment sector is BAME.

The webinar explored how the industry can make the necessary changes to ensure that it attracts and retains talent and becomes the sector of choice for the business leaders of tomorrow - and crucially examined how the industry needs to become more attractive to talented professionals from diverse backgrounds.

Roma Agrawal, award-winning engineer, author, speaker and presenter, is a tireless promoter of engineering and technical careers to young people, particularly under-represented groups. She makes regular media appearances promoting the profession and practice of engineering. Her first book Built was published in 2018.

Rightly impatient for change, Agrawal described her wide experience of working in the industry and identified three barriers she had encountered along the way. “There was a lack of career insight at school and college,” she said, describing how girls were not given engineering as a possible career path to pursue. And, when choosing to study for an MA in engineering course: “I was the only person from 120 students who didn’t have an engineering degree. Thankfully the university said yes and accepted me for the MA.”

The third barrier came when Agrawal first tried to join the industry. “My background and engineering didn’t tick the right boxes,” she said. “I initially had a physics degree, and major companies didn’t even offer me an interview. So, there were systemic issues – simply getting into the profession was full of barriers. Thankfully I worked my way in and created amazing opportunities for myself,” she said.

But Agrawal still encountered problems along the way. “I got a lot of support from senior directors, but at the same time there was a lot of people saying I only got opportunities because I was a box- ticking exercise as a brown woman. That’s frustrating! People were also mocking my book and MBE – something that carried on for years after I left some of my former employers,” she said.

And, in a clear message to the industry, she said: “You have a system you have control over, so fix that system. Listen to your employees. Fix your system, and then hire people like me,” Agrawal said.

Anjali Pindoria, project surveyor at Avi Contracts, spoke next. Passionate about raising awareness of the numerous opportunities within construction to inspire the next generation, she also described some disturbing episodes from her early career in the all-too-recent past. “I’m passionate about construction, we’re all here to achieve the same goal. But I fear sometimes when I speak out as a woman, that I’m compromising my career. I remember my early career, the verbal abuse I received from some men, and no-one stood up for me,” she said.

“We need to rethink our approach and encourage a new generation to make a difference. One way of challenging this was going back to my own community and as an Asian woman, encouraging people to break away from stereotypes. Another thing hindering our sector is the attractiveness of our sector. How do we improve, where do we go from here – both inwardly and outwardly?

“Firstly, we need to understand where we are as an industry – what can we do in our daily lives to make a difference – and we need to bring everyone into the conversation. Secondly, we need to look outwardly and address how we engage with a range of schools and communities to help influence future generations. Conversations about inclusion are more important than ever,” said Pindoria.

The next panellist, Sendra Sylvester, leads on equality, diversity and inclusion for the UK and Europe at Atkins. This involves ensuring that ED&I is embedded into all aspects of Atkins people plan and everything the organisation does. “There’s no hiding from the fact that there’s a lack of diversity in leadership in the construction sector, in stark contrast compared to other STEM industries,” she said, before highlighting three ways to both enable and embed long-term change.

“Firstly, use people’s actually lived experiences. Use data but listen to people’s experiences. Secondly, collaboration. Progress doesn’t work in isolation. Research and work with others to challenge and make change. Move from awareness to actually making the change. Thirdly, there has to be a drive towards inclusive leadership. It’s essential to look at the role of leadership at the top of the industry.

“It’s all against a backdrop of a changing industry that needs new skills – and we also must not take our eyes off staff retention, asking why people leave the industry, while also encouraging a new mix of diverse cultures into engineering.” 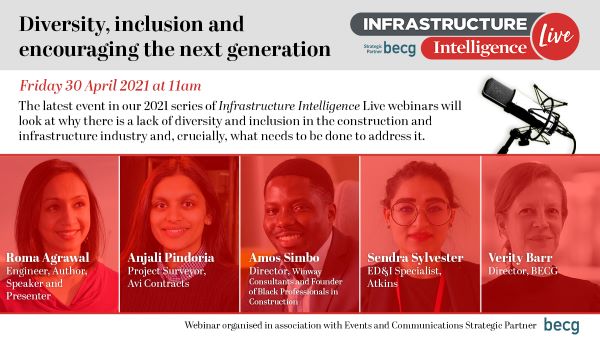 Fourth speaker Verity Barr heads up the Birmingham office of communications consultancy BECG and said that the industry needed both individual and collective change. “How we change the sector is such a massive challenge,” said Barr. “Ask how we can change ourselves individually, so that collectively we can help make a difference. I’m also fortunate to work for a progressive employer, working with specialist outside groups to help attract a diverse range of people and drive change.

“We’re looking over the next 12 months at three areas where can drive positive change - BAME representation, neuro disability and physical disability. We’re also rolling out unconscious bias training, aiming to have inclusivity as a given throughout the company.”

Final panellist, Amos Simbo, is a director of Winway Consultants and founder of Black Professionals in Construction (BPIC). BPIC Network is a platform for black and ethnic minority professionals in the built environment to connect with other members of the industry, promote the industry as a good career choice as well as promote diversity among construction companies.

“Other colleagues have problems navigating the industry, so I dug deep and started looking at inclusion networks. People felt as though they didn’t have a place in the industry,” said Simbo. “A few things struck me about the industry. I’ve heard the industry say we’ve got a long way to go – but how long is that? Everyone knows inclusion is good, we already know what it is. The industry blames the schools – the usual answer – but the industry needs to change to address gender and diversity issues and help attract new talent.”

Andy Walker, Infrastructure Intelligence editor, said: “This was an excellent event. The contributions from our excellent panellists and the discussion that ensued after they spoke show that this was an extremely well received webinar on a crucial issue for our industry. Many attendees have commented how much they valued the discussion and hearing the speakers speak in such an open and constructive way.”

There were also a number of questions from the audience covering a range of issues, including concerns about the industry’s recruitment process, social procurement, working from home becoming a potential barrier to inclusion or, conversely, a positive way of including women and disabled people, and introducing both short and long-term structural change within the industry.