The awards celebrating the best of UK infrastructure exports went virtual for the first time this year. Infrastructure Intelligence editor Andy Walker attended the online event which announced the winners.

The winners have been announced in this year’s British Expertise International Awards. The awards, the UK’s principle forum for celebrating the very best of UK infrastructure exports, took place virtually for the very first time on 21 October. Entries are open to all UK-based professional services firms working internationally and this year’s bumper crop of submissions came from a wide range of companies and individuals who have made an outstanding contribution to the sector.

Infrastructure Intelligence was a media partner for the awards and is working closely with British Expertise International (BEI) to help promote its work and that of its members to a wider audience. BEI is the UK’s leading membership organisation for UK-based companies exporting infrastructure services and its online 2020 awards were organised with efficiency and some panache as a dinner-suited BEI CEO Tom Cargill introduced the event, hosted on the Brella virtual event platform.

Keynote speaker, James Duddridge, minister for Africa at the Foreign, Commonwealth and Development Office praised the role of BEI members working overseas and also the excellent work undertaken by BEI in assisting firms in doing business. “Thank you for championing UK exports in challenging times,” he told the audience at the event.

The first award announced was the International Positive Social Impact Award, an award made to the organisation that was judged to have demonstrated innovation, excellence and lasting positive social impact within the last 24 months internationally. The winner was the British Council for its Ceibal en Ingles international partnership created to overcome the challenge of teaching English to Uruguayan primary school children, who otherwise would not have the opportunity to learn because of a shortage of teachers. Since 2012, British Council have been working in partnership with Plan Ceibal using videoconferencing technology to transform the lives of 80,000 primary school children in 550 schools across the country. Mott MacDonald was highly commended in this category for its Pakistan Education Innovation Fund project.

Next up was the award for International Development: Physical Project, an award which goes to the most effective international development of a physical project undertaken by a UK based company.  Always a highly competitive award, the winner was Mott MacDonald for their project, Energy Security and Resource Efficiency in Somaliland, which aims to promote renewable energy and improve access to affordable electricity. Now in its second phase, the project has achieved up to 42% price reductions in targeted areas. Cardno Emerging Markets was highly commended for their entry, Improvement of the Roads Maintenance System for use by the Dar es Salaam Local Authorities.

The third award, for International Development: Non-Physical Project, was won by HR Wallingford for D-MOSS – A space-based early-warning system for dengue fever. According to the WHO, half the world’s population could now be at risk from the fever and HR Wallingford’s ground-breaking software, the Dengue forecasting Model Satellite-based System, (D-MOSS), combines satellite data with weather forecasts and a hydrological model to predict dengue outbreaks up to six months in advance. Two entries were highly commended - Scriptoria for its cloud-based database helping to explore and manage diseases threatening crops in sub-Saharan Africa and Crown Agents for providing value for money assessment services to the Ministry of Finance in Ghana.

The topical International Environmental Impact award celebrates the efforts of British companies in tackling the environmental challenges abroad in the increasingly important struggle against environmental change. The winner of this award was Winch Energy for its project in Sierra Leone for the design, installation, operation and maintenance of off-grid electricity generating capacity in the northern region of the country. 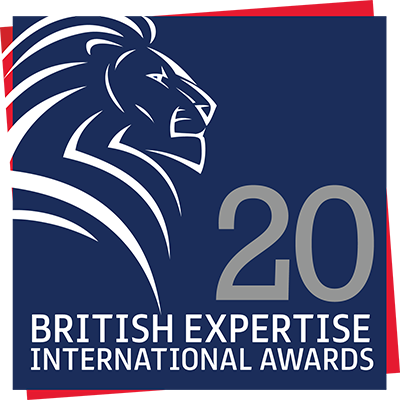 The award for International Collaborative Project highlights exemplary approaches to collaboration between UK companies and/or with international partners. The winner, who impressed the judges for their diversity of focus, was Resurgence for their entry, “Developing Risk Awareness through Joint Action”. They assembled a unique team of British, Kenyan and Tanzanian meteorologists, community development experts, risk communication specialists, city officials, residents and broadcasters to create Africa’s most inclusive city and community localised weather forecasting and early warning service which has supported millions of people’s livelihoods. Two entries were highly commended in this category – ICF (Putting China in Control of its Carbon Emissions) and Mott MacDonald (The Fleming Fund Options Consultancy Services – Maternal and Newborn Improvement).

The sixth award, for International Architecture and Design Project went to Kilburn Nightingale for its work on the British Embassy, Kathmandu in Nepal. The project includes newbuild and refurbished offices for FCO and DFID staff and housing facilities for staff in the existing compound. The new office facilities increase and improve the office space with the buildings arranged around sheltered courtyards. The judges were impressed with a culturally and environmentally sensitive project and a design that respects and engages with its natural surroundings.

The ever-popular Young Consultant of the Year award was very well supported again this year and there was strong competition to win a prize which rewards those that already have significant achievements on the international stage and show great future potential. This year’s winner was Ingrida Kerusauskaite, the portfolio lead on anti-corruption at international advisory company Palladium. Recognised as an expert in anti-corruption, Kerusauskaite is frequently invited to speak at high-level events in the UK and internationally and has already published a book on the topic. She is currently project director or team leader on five UK government-funded projects on anti-corruption and illicit financial flows in the Caribbean, Africa and the Middle East. Highly commended in this category were Chris Quick from Turner and Townsend and Nur Saleh from Global Partners Governance.

Small and medium sized businesses can also achieve remarkable success in the international arena and the International SME Business of the Year award showcases organisations with fewer than 250 employees. This year’s winner was The International Governance & Risk Institute (Govrisk). Within a decade of its existence, GovRisk has become a trusted partner of high-profile clients worldwide, including the FCO, DFID, DIT, EBRD, World Bank, United Nations, foreign governments and private clients. Through their programmes, they have exported British expertise worldwide, promoting the UK’s commitment to the rule of law, stable & transparent business environment and inclusive growth. Highly commended in this category were Crown Agents Bank and Landell Mills.

The ninth and final award, International Business of the Year, is made to the UK professional services organisation judged to have achieved the most impressive overall business performance internationally during 2019. This year’s clear winner was Turner & Townsend. With 110 offices in 45 countries, the company has seen another year of exceptional growth delivering the biggest global programmes. Turner & Townsend are now reinvesting for the future, transforming its business and sharing and exporting its expertise globally to drive its continued success. Judges said that the company’s ambition and drive is as much an asset to the UK as it is to their customers.

Summing up the event, BEI CEO Tom Cargill paid tribute to the skills and expertise of all those who are working tirelessly to create the transformational projects and infrastructure that the planet needs. “Those skills will be ever more in demand as the UK and the world look to recover and rebuild from the immediate and secondary impacts of the pandemic,” said Cargill.

British Expertise International are to be congratulated for holding these awards virtually on a very accessible platform. The event is a great example of a business association raising the profile of its members in extremely challenging times.

Click here to watch a recording of this year's British Expertise International Awards.