The key importance of US infrastructure and its reframing in a new post-Covid era together with the need to attract more young people into engineering emerged as major themes in an exclusive Infrastructure Intelligence interview with US engineering industry leader Linda Bauer Darr on Wednesday 9 March 2022.

Darr is president and CEO of the American Council of Engineering Companies (ACEC), the largest national organisation of consulting engineers in the USA, with 51 state and regional member organisations representing more than 5,800 independent engineering firms throughout the United States.

The organisation has been closely involved with the discussions and negotiations around US president Joe Biden’s infrastructure plans, which led to the recent passing of the $1.2trn Bipartisan Infrastructure Law. The ambitious plans, if successfully delivered, will add up to the biggest investment in infrastructure that has ever been seen in any country in the world.

In a wide-ranging and lively conversation with Infrastructure Intelligence editor Andy Walker, at an event organised in association with BECG, Darr clearly came across as an enthusiastic and impressive advocate for the plans and the wider industry itself, which is set to rebuild America’s infrastructure and reshape the economy on a huge scale. 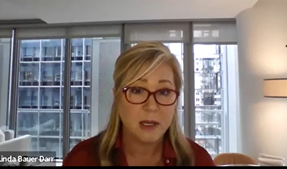 “The Infrastructure Investment and Jobs Act (IIJA) represents the largest investment in America’s infrastructure in a generation – and it’s long overdue,” said Bauer Darr. “This bill is a game changer for us. It’s a $1.2 trillion bill with $550bn in new investment that spans multiple markets from transportation to water to energy.

“The money is starting to flow. Our ACEC Research Institute studied the potential impact this legislation would have on our industry. We found that over the six years the IIJA covers, the bill would create more than 82,000 jobs in engineering, generate $62bn in wages and add $75bn to GDP,” she said.

Darr emphasised that infrastructure is now being ‘reframed’ as a result of the post-Covid environment and that now, more than ever, the industry is seen as a vital driver of economic growth.

“It took Covid to push Congress and the administration to look beyond traditional market sectors in the built environment – roads, bridges, airports, water systems and the like – and include things like energy, resiliency, and expanding broadband coverage for rural parts of the country as part of a more comprehensive and wholistic approach to infrastructure,” said Darr.

“Prior to passage of the IIJA, Congress tended to approach infrastructure in a very siloed manner – they did separate bills to support surface transportation, water, airports, and other sectors. That changed in a big way last year and I hope it serves as a template for what Congress can do again in the future,” she said. 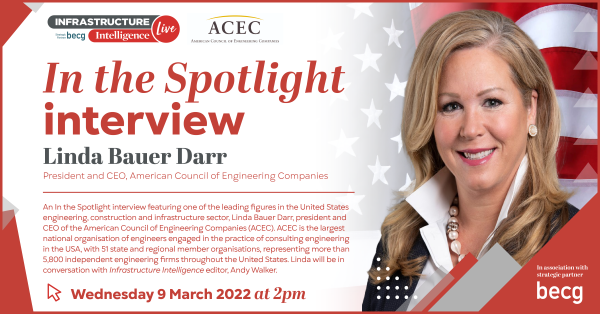 US infrastructure investment remains broadly popular and widely supported across the political spectrum, something Darr attributes to the credibility and influence of the industry, thanks to a clear programme of engagement with the public and policymakers alike.

“Engineers have a lot of credibility with policymakers and the public. They respect our opinions and value our professional expertise. Focus is critical. While president Biden came into office with a broad agenda, the infrastructure piece had the most momentum and broadest coalition of support behind it,” she said.

“We had been working this issue extensively with the previous administration and with Congress. Lawmakers understood the needs facing this country in the infrastructure space and understood how a broad infrastructure package would help to kickstart economic growth following the pandemic.

“President Biden picked up the ball from there and wisely saw the possibility of bipartisan compromise on infrastructure. He was visible in supporting those negotiations and sticking with the agreed upon elements of the infrastructure package and we have a big win as a result.”

With work on the $1.2trn plans already underway, Darr still had time to highlight working with ACEC membership and introducing young people to engineering as two favourite parts of her job.

“Our members span everything from small firms with just a few employees to huge firms that do work all over the world. Just seeing their creativity and ingenuity is energising as they tackle some of the biggest challenges facing the planet,” she enthused.

“Another one of my favourite things about my job is introducing young people to engineering. Right now, there are a shortage of engineers to fill all the open positions in the industry and going forward we are going to need even more. I love showing students how a career in engineering is about more than just designing buildings – it’s about impacting their community. Our careers are stable, pay well, and let engineers live their values through their work,” Darr said.

Infrastructure Intelligence editor Andy Walker said: “Linda is a fantastic advocate and industry leader and perfectly summed up the reframing of infrastructure and its importance in the new post-Covid era, both in the US and around the globe. And, with all the work underway, she still had time to focus on the importance of introducing young people to engineering. A great example of strong, clear long-term ambition and leadership for everyone in the industry to applaud. We need more Linda Bauer Darrs in the global infrastructure sector.”