The proposed nationalisation of a northern airport became a major political issue and helped a mayor win a closely fought election. Rob O’Connor reports from Teesside on plans to revitalise the newly renamed Teesside International Airport.

It’s not often that a local mayoral election is decided on a potentially key infrastructure project, but that’s exactly what happened in Teesside in 2017.

Once a buzzing regional hub, Durham Tees Valley Airport had endured a torrid fifteen years; buffeted by falling passenger numbers, controversial surcharges, crippling passenger duties and a string of airlines that had withdrawn their services.

The airfield began running passenger flights in the 1960s and became Teesside International Airport, owned by an amalgamation of local authorities, which was later to be Cleveland County Council. After the abolition of the county council in 1996, the airport ownership transferred to the remaining five Teesside authorities of Darlington, Hartlepool, Middlesbrough, Redcar and Cleveland and Stockton-on-Tees.

In 2002, the authorities controversially decided to sell off the airport, and Peel Airports Ltd was selected as the preferred partner, taking a 75% stake in the airport. Hopes were high that Peel could kick-start a rapid development programme on Teesside, and double passenger figures to 1.5m in five years. But a re-brand in 2004 and controversial new name - Durham Tees Valley - divided opinion among Teessiders, who branded it a “backward step” and a “crazy waste of money.”

Fast forward to 2017, the airport was losing around £2m a year and had seen passenger numbers collapse from a peak of 910,000 in 2006 to 140,000 just over a decade later. And that’s when the newly created Tees Valley Combined Authority (TVCA) came into the picture.

Creating the role of Tees Valley Mayor unlocked £513m of government funding to be spent in the region, with key spending decisions being made locally, rather than by civil servants and politicians in London. Convinced the airport could be a significant economic asset, Conservative mayoral candidate Ben Houchen launched his campaign by pledging to take the airport back into public ownership. The pledge was the stand-out feature during the election campaign, and brought shock-waves when Houchen was elected on 4 May 2017.

Ben Houchen launched his mayoral campaign by pledging to take the airport back into public ownership. The pledge was the stand-out feature of the campaign and brought shock waves to Teesside when he was elected as Tees Valley mayor in 2017.

For a previously solid Labour area, the role the airport played in a Conservative mayor being elected was hugely significant, but there was still plenty of work to do. Despite ongoing losses, Peel initially insisted the airport was not for sale, and the leaders of the five local Labour authorities all dismissed the new mayor’s ambitious plans as a “vanity project.”

“Taking back control of our airport presents a once in a generation opportunity for the Tees Valley to find its voice again,” said Houchen. “We won’t just be competing with Newcastle, Leeds or Birmingham – our success depends on our ability to work, trade and collaborate with old friends and new allies around the world. With a new plan, new leadership and a new vision, the People’s Airport will pay for itself,” he claimed. 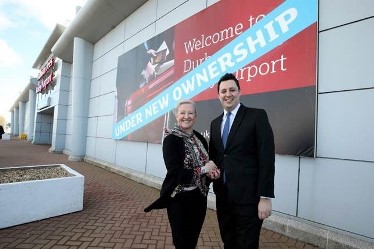 However, the plan still needed unanimous backing from the five leaders of the sceptical Labour-led authorities at a special TVCA cabinet meeting in January earlier this year. But a hugely positive PR and social media campaign won overwhelming public and business support, putting the five council leaders under unprecedented pressure, with Houchen stressing that, should the deal not work, the land value itself would outweigh the price paid to take the airport back under public control.

40 leading Teesside businesspeople wrote to the local Labour leaders, urging them to back the plan, and Peel also admitted that, unless the deal went through, the airport’s future was extremely uncertain after 2021. Public support was so overwhelming that the five council leaders had no option but to finally back the plan, which saw the airport transfer back into public ownership.

“It was the reason I got elected; I’m under no illusion,” said Houchen, speaking to the Financial Times. “I’m delivering the one single thing that got me elected.” Six months after that landmark vote, ownership has transferred to the mayor and TVCA, and the airport’s long-term future is looking positive.

Stobart Group were appointed as airport operator in March, a new management team is now in place, and a ten-year masterplan is currently being developed. The plan aims to deliver a ten-fold increase in passenger numbers, ten new routes, a low-cost carrier and increased freight.

TVCA say that Stobart has a proven track record, having successfully run London Southend Airport since 2008, increasing passenger numbers from 5,000 in 2009 to 1.5m in 2018. Houchen said: “Stobart is a huge company with significant experience, knowledge and expertise in the aviation sector. They will hold a minority share in our airport with a clear and overwhelming incentive to turn it around.

“This airport has been run into the ground and was just months away from closure, but we will bring it back from the brink and turn it around. We have the plan and we have the right partner on board to make it happen. Teesside is taking off!”

The latest landmark came last week, when the airport was officially renamed Teesside International Airport, regaining its traditional identity. Will the airport and the local economy take off as mayor Houchen claims? Time will tell.