Designing a new station is never easy but doing that while ensuring services pass through a key section of the UK’s rail network multiplies the complexities, but that is why HS2’s Old Oak Common is described as a pivotal part of future-proofing the country’s railways.

These thoughts are shared by rail experts who form part of the team working on the station design at Arcadis. The engineering consultants received the news in late 2018 that they had won a £7m contract to future-proof the proposed Old Oak Common HS2 station and would be responsible for track work, signalling power supply systems and electrification.

HS2 says the Old Oak Common HS2 station is due to be ready by 2026, offering a multimodal transport interchange providing easier transitions between a number of other mainline and commuter services, including the Elizabeth Line and the Great Western Main Line.

But in the race to 2026 comes many complexities and challenges as Arcadis UK rail sector director Chris Pike explains. He describes the design task of Old Oak Common as one “massive jigsaw with lots of moveable pieces” by which one action can have a big knock-on effect for another.

“We are dealing with a very, very complex railway system with such a vast array of stakeholders and interfaces, so making sure you understand each of those and how they could impact the project is essential to the final solution,” Pike says. “What you don’t want is not understanding those properly early on for you to make a fundamental decision on a solution for something to then HS2 at Old Oak Common come out the woodwork and trip you up.”

The new station is projected to be the biggest sub-surface station to be built in the UK at around 1 kilometre in length and 20 metres below ground level. It will be built on an urban brownfield site in London Zone 2 and have eight platforms above ground for commuters. 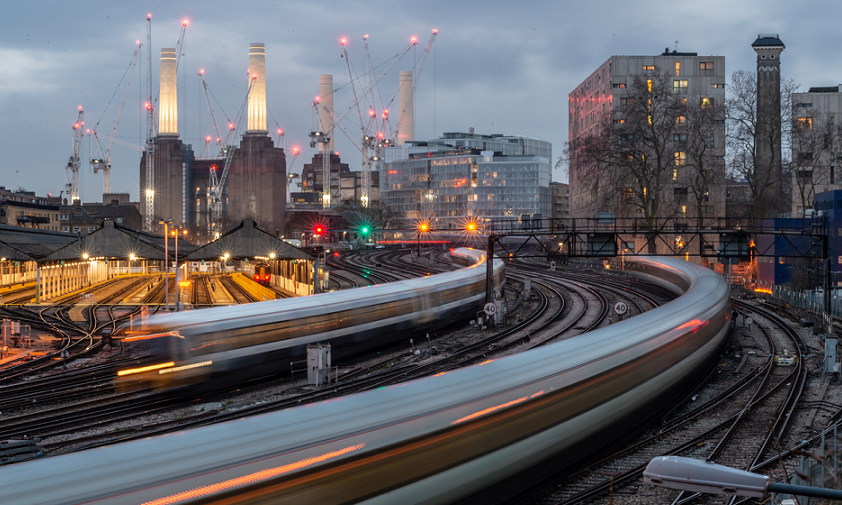 Pike discusses how teams need to splay existing lines out, ensure platforms are a certain width for safe access on and off, while contemplating that some trains won’t be stopping at the station meaning there are plenty of operational performance-type issues.

“The big issue is really while you are doing all of that, you still have to preserve existing services, so much like London Bridge our biggest challenge delivering it was ensuring all of the station remained operational without impacting services,” Pike added. Chris Pike, UK rail sector director Arcadis. “We are dealing with a very, very complex railway system with such a vast array of stakeholders and interfaces, so making sure you understand each of those and how they could impact the project is essential to the final solution.”

A central aim Network Rail has for the station in north west London is to get more trains running through at rush hour times in the day but Arcadis’s vision goes beyond just designing Old Oak Common.

Tom Constantine, a technical director at Arcadis who led the bid, explains: “The role Arcadis is playing in designing the new track layout and signalling will be pivotal in helping Network Rail meet their target of achieving 24 trains per hour, passing through the station at peak times. This isn’t just about designing a railway station for 2026, this is about future-proofing the railway, so it can operate safely and efficiently for decades to come.”

A crucial element in the successful Arcadis bid was its strong digital and innovation focus with teams able to leverage digital rail expertise from the Netherlands and experience of using 4D BIM, which adds ‘time’ measures to a 3D model. Chis Pike says the technological advancements allow customers to go on a journey through current state to finished product.

“Tools like 4D and 5D BIM are critical for managing a wide range of stakeholders and can help to accelerate the design and approvals process,” Pike added. “Equally using complimentary approaches such as Virtual Reality (VR), Augmented Reality (AR) can support project development and offer safer alternatives to site-based activities. With VR, anyone can pick up their iPad, move it around and really get it and around the model to see what the design looks like internally.”

The use of 4D BIM allowing for more of a collaborative approach is seen as vital asset while Old Oak Common remains in the development stage. “We are now at a stage with Old Oak Common where we are putting together the three, four, five options on how we can deliver this. So, within this stage of the process, collaboration between designer, customer and stakeholders is really important whereby being able to create an environment where you can unite and have those digital tools that enable you to look as a collective, pull it apart, identify any flaws and risk them out is vital,” says Pike.

"We are dealing with a very, very complex railway system with such a vast array of stakeholders and interfaces so making sure you understand each of those and how they could impact the project is essential to the final solution."
Chris Pike, Arcadis UK rail director.

But with Network Rail under increasing monetary pressures, the need to ensure efficiency and value for money has never been felt more than in CP6, when compared to previous control periods. This is something firms like Arcadis is well aware of when bidding for contracts, says Pike.

He adds: “When you lodge a bid for a contract like this you are always looking for an edge, firms will always look to see how they can optimise their position and enable them to come up with a solution that adds value to the client and delivers efficiencies especially in today’s current climate. Our focus is now not just about our customer but it’s also about the passenger and end user. The agenda has changed, Network Rail are under pressure and for us as a business, we are not looking to be just a designer anymore.”

The Arcadis rail business has been transformed over the last decade, growing from approximately just 75 staff in 2009 compared to the 650-plus which are currently involved in UK operations. The Old Oak Common work is seen a massively important for the business moving forward and while essentially teams are working to ensure Network Rail get the station the way they want it in a way they approve of, Old Oak Common is seen as a real test in implementing new technologies and making them a success to bring a positive benefit on future projects, according to Pike.

“This win is really important to us because as a UK business we have come from a position where we worked very much in the contractual end in design and build,” Pike explains. “Our roots started in civil structures and moved into railway systems but this contract in terms of size is one of the first where we have been doing purely railways systems, so strategically it’s significant for us and comes at a point where we are trying to bring in new technology and a new way of working,” says Pike.