A new national net zero department, headed by a net zero tsar with the power to ensure a speedy and smooth transition to renewable energy, was one of the major calls to emerge at a typically insightful Infrastructure Intelligence webinar on Friday 29 April.

The keynote webinar, Making the most of offshore wind, was organised as part of Green Infrastructure Week and hosted by Infrastructure Intelligence in association with communications specialists BECG.

As well as the call for a net zero tsar, leading industry figures highlighted the huge economic opportunities for the UK presented by offshore wind and renewables, but also stressed the challenges including the need for strong political support and clarity to speed up development consents for key onshore and offshore infrastructure, as well as the need for support to build and develop the supply chain needed to make the transition work.

Offshore wind has been identified by the government as a critical source of renewable energy for the nation's growing economy. By 2030, the UK plans to quadruple its offshore wind capacity to generate more power than all homes currently use today.

As well as the net zero imperative for renewable offshore wind, in the wake of Russia’s invasion of Ukraine the government has now declared that a massive expansion of wind farms across the UK is now needed for national security reasons.

James Theobalds, renewable energy transaction advice leader at Arup, said: “We need to understand the timescale which is driving the agenda. On a political level, the energy strategy on net zero and carbon reduction is moving in the direction to support offshore wind. But there are some really interesting challenges to meet in the next decade and the industry needs government support to ensure the energy transition can be delivered within the timescale we all want to achieve.” 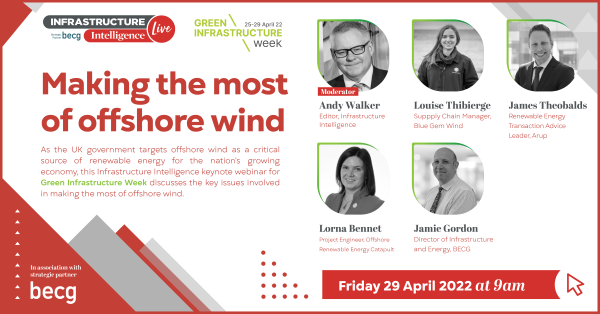 Louise Thibierge, supply chain manager at Blue Gem Wind, said: “The timeline is really challenging and it’s fair to ask whether 2030 is achievable. There’s currently a lack of suitable infrastructure and consents need to be approved much more quickly to allow projects to move fast. If we’re going to secure energy transition targets and a route to market, we need to start now.”

Lorna Bennet, project engineer at the Offshore Renewable Energy Catapult, said: “The current energy crisis, especially around gas supplies, makes clear we need to move to renewables as soon as possible. We need to look at offshore infrastructure, including energy storage, to move away from fossil fuels. If we’re aiming to power all UK homes with renewable energy, the supply chain needs to develop and advance to make sure we can meet energy transition targets. That means huge potential for thousands of new jobs and skills – and that means huge economic opportunities for the UK.”

Jamie Gordon, director of infrastructure and energy at BECG, said: “We all agree on the direction of travel, but there’s a lack of detail in the policy coming out from the government. The timelines are really challenging, with development consent refusals still slowing up the process. I feel sorry for the developers – how can they do the maths with the current uncertainty? There’s delay, delay, delay, and we don’t have time for delays.

“The new offshore transmission network review has to get up and running very quickly – and I think there has to be a net zero department, with a net zero tsar with the clout to make the changes happen. Be bold. Be brave. The opportunities are enormous.”

Click here to watch a recording of the webinar.