A cross-party group of more than 80 MPs are calling on the chancellor Philip Hammond to stump up the cash for northern infrastructure across the next three decades in the autumn budget.

A letter organised by the Northern Powerhouse All-Party Group and signed by Labour and Conservative MPs is demanding that the government release as much as £100bn by 2050 into the north’s rail and roads. They also call for the completion date of Northern Powerhouse Rail to be brought forward to 2032.

Referencing the National Infrastructure Commission’s recommendation, the letter asks to allocate £24 billion to Northern Powerhouse Rail, including at least £200m per annum to bring forward the target completion date to coincide with the planned arrival of HS2 in Leeds and Manchester in 2032.

The letter reads: "NPR has the potential to increase capacity and reduce journey times but also to greatly enhance transport links that deliver transformational economic growth for our towns and cities." 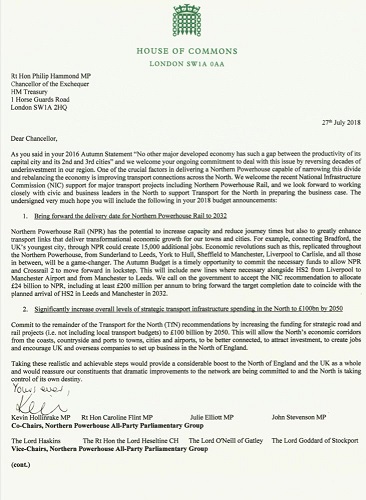 The pressure on the chancellor to commit to funding has been led by Northern Powerhouse All Party Parliamentary Group chairs Kevin Hollinrake, John Stevenson, Caroline Flint and Julie Elliott and 15 Peers.

Kevin Hollinrake, Conservative MP for Thirsk and Malton, said: "This government has embraced the economic principles of the Northern Powerhouse to address the decades of under-investment in the North. We are now at a critical point - Northern Powerhouse Rail has the potential not simply to improve rail travel for commuters and families but to deliver economic growth right across the North, not simply in the core cities.

The letter is part of growing momentum within the north to make sure Whitehall listens to the needs of those outside London and the south-east. This week, Transport for the North’s (TfN) chairman John Cridland wrote to the transport secretary Chris Grayling calling for a single person to oversee train services and rail infrastructure.

In the letter, the chair said TfN’s Partnership Board “were left with no confidence as to the existence of a joined-up, evidence-based plan to arrive at a date when full, stable service levels will be resumed. There is no mechanism in place in the north to oversee both the operational delivery of train services and rail infrastructure, with accountability spread across the industry. Therefore, the board are writing to request the appointment by government of a single person to oversee both.”

Commenting on the need for northern investment, Lord Jim O'Neill, vice chairman of the Northern Powerhouse Partnership, said: "As someone attracted to spend some time as a minister because of the focus on the Northern Powerhouse, and being involved in the setting up of Transport for the North, getting a true state-of-the-art transport network is absolutely key. Affordable and quick trains connecting all key parts of the Powerhouse, are vital to delivering on the goal of raising productivity both across the North, and with it, the country as a whole."