More than 12,000 new school classrooms need to be built in the next two years to accommodate for the soaring number of primary and secondary pupils in England that are expected, according to the latest research undertaken by the Scape Group.

The public procurement specialists claim that England will see more than 385,000 additional pupils enter the primary and secondary school system by 2021/2022, filling the equivalent of 12,835 extra classrooms with London, the south east and the south west anticipated to see the largest increase.

The latest School Places Challenge report published by the organisation once again identifies the vital need for more educational infrastructure with England’s school-aged population set to increase by 5.5% over the next two years. 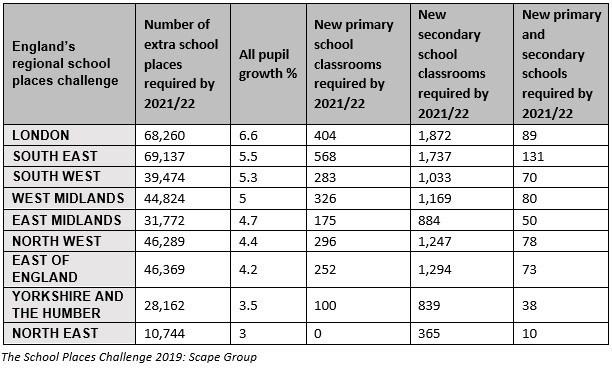 Birmingham is the region which faces the most substantial projected rise in students with Manchester coming in a close second. Both cities can expect more than 12,000 extra secondary pupils by 2021/2022. Between them, they will need to provide the equivalent of 53 new schools in the next two years, according to the research.

To combat the growing schools gap, Scape believes the adoption of offsite construction as the main method of building for all new schools is crucial because if modular can grow in scale, building schools of the future will become more efficient and cost-effective.

The public sector group is also calling for greater collaboration between councils and developers to ensure that secondary schools are built in major urban extensions and developments first, through agreements between developers seeking planning permission and the local planning authority (Section 106 agreements).

The group’s chief executive Mark Robinson believes the government’s intense focus on Brexit has led to education dropping down the agenda. He is adamant that more attention needs to be paid to schooling with every part of the UK said to need more schools with local authorities nationwide “feeling the strain”.

Robinson added: “We must collectively focus on delivering a strategy and solutions which not only provide high-quality, modern spaces for teaching and learning but also offer our colleagues in local authorities cost certainty, value for money and timely delivery. This issue is likely to be exacerbated in the coming years if we do not think and act more creatively now. Good schools are the bedrock of our society, and there can be no room for error.”

The full Scape Group report, The School Places Challenge 2019, can be downloaded here.