Industry leaders from some of the biggest consultancy firms and associations have given an insight into some of the issues that keep them awake at night in the opening panel session of the European CEO Conference in London.

The conference which is being run by the Association of Consultancy and Engineering (ACE) has brought some of the most influential figures together over two days to identify what is influencing our industry and exploring whether organisations need to change the way they work.

Opening up the debate, Arup’s group chairman said it was the first time in his 40 years within consultancy that “forward visibility was very uncertain”.

“Geopolitical tensions, societal and environmental all make this very uncertain times we live in, if I wasn’t such a good sleeper then they would keep me up,” Hodkinson said. “The trade war and geopolitical struggle we are seeing emerge between china and the west could throw a massive spanner in the works depending on which side the Atlantic you re on as it relates to the economy of the wold and something we need to keep a close eye on.”

Hodkinson also had a word of warning for bosses and highlighted the need to work together and invest more with a longer-term view, instead of competing in a repetitive and harmful race to the bottom.

“Infrastructure demand is strong and dictated by ever-increasing population growth and urbanisation,” he said. “But we are not investing in our own professions sufficiently enough. We shouldn’t be beating each other up in the race to the bottom line. As an industry we need a lot more skills and I would ask everyone to think about the investments we make in the future. We should be investing 5%, not one or 2%.”

Alain Bentejac listed four words that were crucial for firms to sit up and take notice of moving forward. The FIDIC president said CEO’s should be taking particular attention to change, sustainability, digitalisation and its people. 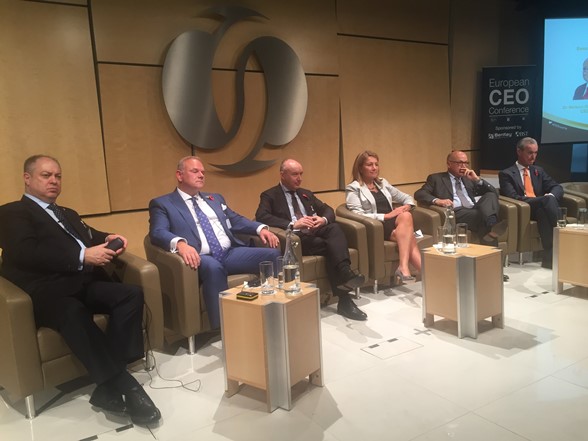 Bentejac claimed the world is changing at a faster rate than the industry and it was up to those leading the way to respond. While, digitalisation was changing the tools and processes firms use to do their work but the real question mark was the impact of new technology on business models and he believed the impact was much less when compared to other industries.

Poloni was next and she said how the current political landscape meant that “volatility is the new normal we have come to expect” but it was important that the sector helped lead the way in uncertain times.

However, the AECOM boss believed engineering and construction companies still need to do a lot more in ensuring their workforces were more representative of society.

“People are central to what we do and we need to upskill our staff with different type of skills so they think differently and we can help by partnering with tech firms,” she added. “Although, we have some way to go to in terms of mirroring society and what are clients expect in terms of the diversity. There are good signs but we need to go further than some nice policy documents.”

Despite the challenges presented, Galbrait recognised the positives of the industry in its ability to respond, while highlighting just how important it is to retain people as well as bring new blood on board.

He said: “I think it’s easy to be overwhelmed by the many type of things to think about. Important we are also optimistic about our collective abilities to work this through. As an industry we are quite resilient and robust to navigating uncertainties. However, we are going through a period of consolidation and sat here back in 2005 we would have expected a broader spread of activity than what we see now. We all know there is a skill shortage and we are hopeless at retaining people in the long-term. I think this is affecting the passing down of knowledge and there is a danger we will be making the same mistakes in the next two decades that we have in the last 20-30 years.”

Finally, Cowlard reiterated the need to tackle mental health and wellbeing and that is was vital organisations across the board addressed it and openly discussed the subject.

“The wellbeing of staff is something that genuinely keeps me up at night,” the Arcadis CEO said. “It’s increasingly difficult to escape from work in today’s climate with the technology at our hands and that’s a big challenge. It’s absolute key we continue to improve working conditions and provide support whenever we can.”