After years of planning, debate and discussion, the government has finally given the go-ahead to build HS2. Industry reaction is clear and unanimous - “It’s about time; now let’s go and build it!” Andy Walker reports on a landmark decision for construction and the country.

The construction sector has reacted with undisguised glee to the government’s announcement on 11 February that HS2 is to be built and in full, subject to a further review of costs of the line in the north. In what has been hailed as a landmark moment for the sector, many in the industry see the decision as one which could open up a new “golden age” for infrastructure.

ACE chief executive, Hannah Vickers, said: “This is great news for people across the Midlands and the north who will benefit from an economic boost by being better connected. Thanks to capacity being opened up across the network, projects like Midlands Rail and Northern Powerhouse Rail can become a reality. There has been enough discussion and delay. HS2 was first announced nearly a decade ago. We need to stop talking and get on with building the future.”

Civil Engineering Contractors Association director of external affairs, Marie-Claude Hemming, hailed “an infrastructure project on a scale of ambition that can only be matched in our country by the achievements of the Victorian generation in building our railways in the first place”. Hemming said that the decision to go ahead with HS2 “heralds a new dawn for the UK’s infrastructure sector”.

"This is an infrastructure project on a scale of ambition that can only be matched in our country by the achievements of the Victorian generation in building our railways in the first place."

Lizi Stewart, transportation managing director at Atkins, said HS2 would be “one of the most transformational projects ever undertaken in the UK, giving the industry the certainty it needs to focus on delivery”. She also urged the government to “move ahead with purpose to ensure that Phase 2 isn’t compromised, recognising that HS2’s true benefits hinge on extra capacity for cities and regions beyond Birmingham.”

The Construction Leadership Council said that the size of the programme meant that the industry has been given a once in a generation opportunity to invest long term in the development of skills, capabilities and technology. CLC co-chair Andy Mitchell said: “The construction sector now has a golden opportunity to demonstrate how far we have come in developing new skills and innovative techniques to deliver a high-performing high-speed railway.”

David Barwell, chief executive, UK&I at AECOM, said: “Delivering a transport network fit for the future needs of our society, HS2 will create a legacy for generations to come. Boosting productivity in the city regions of the north and Midlands and releasing capacity to benefit the towns, villages and communities that surround them.”

Commenting on the government’s plan to review Phase 2 of the project, Midlands Connect chairman Sir John Peace said: “A review must also commit to constructing Phase 2b from the West Midlands to the East Midlands first and must not consider downgrading lines north of Birmingham to cut costs. The Midlands must not be short-changed with a two-tier HS2 network.” 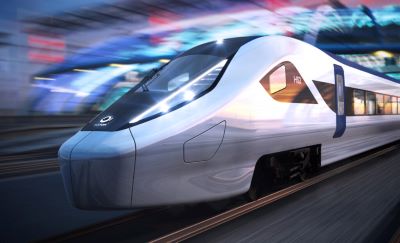 Darren Caplan, chief executive of the Railway Industry Association, looked forward to a new “golden age of rail” and hailed the job creation potential of the project. “HS2 already employs 10,000 people, will support 15,000 by the end of the year, and 30,000 at peak construction. And beyond the project itself, will act as a catalyst for some 500,000 jobs and 90,000 homes,” he said.

Trade unions and business organisations also welcomed the news. Jude Brimble, GMB national secretary, said: “The reality is that HS2 is happening and the government should get on with it. Thousands of skilled jobs depend on the project in construction and the supply chain.” The CBI said simply: “The time for debate over HS2 is over and the time for delivery is now.”

"The construction industry has been given a once in a generation opportunity to invest in the development of skills, capability and technology."

Mark Cowlard, UK CEO at Arcadis, said: “Arcadis is pleased that the independent review by Douglas Oakervee and the government have come to the same conclusions - that the benefits of HS2 vastly outweigh the concerns, and those concerns can be rightly addressed through the planning and development process. Our sector can now move forward with confidence and deliver a railway that benefits all and showcases the best of British engineering and innovation.”

From the north, Roger Marsh, chair of the NP11 Board, the business-led voice that brings together the 11 local enterprise partnerships from across the north of England, said: “We welcome the commitment to delivering the eastern leg, which is critical to ensuring the full benefits of the scheme are felt across the north. Now is the time for us all to pull together and get behind this transformative scheme to ensure that its benefits are felt in the towns across the north.”

Henri Murison, director of Northern Powerhouse Partnership, said: “This is a once-in-a-generation opportunity; to create a truly balanced Britain that works for everyone. Integrating HS2 and Northern Powerhouse Rail is the first step - a bold, decisive, forward-looking step that I am heartened the government has finally chosen to take as politicians across both major parties here in the north have campaigned with us for.”

An HS2 Ltd spokesperson said the announcement “provides much needed clarity on the future of the project for our contractors and the wider community. HS2 has been ten years in the planning and development, and we are shovel ready to start building the first new railway north of London for over a century.”

Bill McElroy, head of industry strategy programme advisory at Turner & Townsend said that the building HS2 was a real opportunity for the industry to shine. “HS2 also presents an opportunity for the UK infrastructure industry to reinvent itself and shine at its brightest. This is a state-of-the-art infrastructure programme that will provide a means for high speed, low carbon travel and support the UK’s transition to a net-zero carbon economy. To deliver this the industry needs to organise itself and step up to the mark.”