HOUSING SHOULD BE SIGNIFICANT NATIONAL INFRASTRUCTURE

Those were the key themes to emerge at the latest Infrastructure Intelligence Live webinar on Friday 27 May, which asked the increasingly important question: Should housebuilding be part of infrastructure and, if so, why?

Building new homes will be at the forefront of the UK’s ongoing recovery from the Covid pandemic and the housing sector remains crucial to the government’s levelling up ambitions.

The stated aim to build 300,000 new homes every year by the mid-2020s will only be met by building at scale, including major new villages, towns and suburbs across the UK.

For development to happen at this level and to create sustainable places, some suggest that policy has to change so that housing can be classed as infrastructure in the planning process. 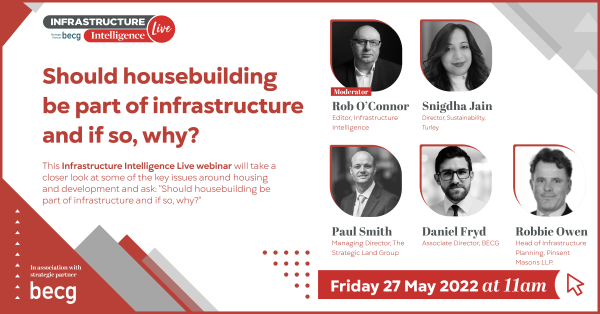 Bringing housing under the national infrastructure brief could pave the way for more affordable high-quality developments, which are supported by both the right infrastructure and local communities, resulting in sustainable places that work for everyone.

A policy that prioritises housing alongside transport, broadband, energy and water would enable planning applications for larger housing developments to go through the nationally significant infrastructure project process, so they would be considered at a national level.

Snigdha Jain, sustainability & ESG director at Turley, questioned whether any minor tweak to the planning process would fundamentally change the situation, and said: “Any new major development should ensure that the right social infrastructure is in place, including healthcare and energy. Housing & infrastructure are currently two halves that need to be a whole.”

Paul Smith, a chartered town planner and managing director of The Strategic Land Group, said: “We can’t wish new homes into existence – we actually have to plan for them. And we need to plan for them via a predictable, efficient planning system. That means giving developers and local communities more certainty as to what development will actually be allowed where and ensuring that planning for new homes is better integrated with both economic growth aspirations and transport planning.”

Adding to issues the first two speakers had raised, Owen said: “I would hope that we can persuade ministers that a straightforward amendment to their Levelling-up and Regeneration Bill, to allow large scale housing sites and new communities proposals to use the NSIPs / DCO planning regime, would be a valuable addition to the tools that the government wants to put in place to help deliver its levelling-up, regeneration and net zero agendas.”

Daniel Fryd, associate director at specialist communications consultancy BECG, and a former press officer to former housing minister Gavin Barwell, said: “Housing is, in many ways, the original infrastructure. We created homes for ourselves long before we built regimented roads, aqueducts and power stations. But now housing plays second fiddle to most other infrastructure. We’ve had countless housing ministers over the last 10 years, and the government department has changed names and priorities constantly.

“Treating housing as nationally significant infrastructure would mean it could be properly considered at a national level by government planning inspectorate for the essential infrastructure that it is. But the critical question is how we keep communities involved in the process. Taking housing out of local hands and giving it all to government inspectors to decide on risks leaving local communities behind. We need to continue to encourage greater constructive involvement from a grassroots level as part of this debate.”