Heathrow expansion bosses have whittled down the potential construction sites that could help deliver the “once-in-a-generation expansion project” to just 18.

Starting with an initial list of 121 applications, those responsible for leading expansion efforts have already narrowed it down to 65 potential logistics hubs before announcing today’s even smaller selection.

Eventually, there will be just a final four which will become Heathrow’s offsite construction centres and help deliver Britain’s new runway while bringing jobs and economic opportunities to every corner of the country. The winners will be announced early next year, ahead of work starting in 2021.

The final 18 sites all vary in size, location and age with Britain’s largest steelworks firm, a former Michelin Site, which at its peak was one of the company’s main manufacturing plans, Scotland’s largest airport and one of the main ports in Wales all featuring on the shortlist.

Heathrow say the latest shortlist have “showcased a strong base of local support, their area’s thriving supply chain, convenient connectivity links and the potential to tap into a skilled workforce”. 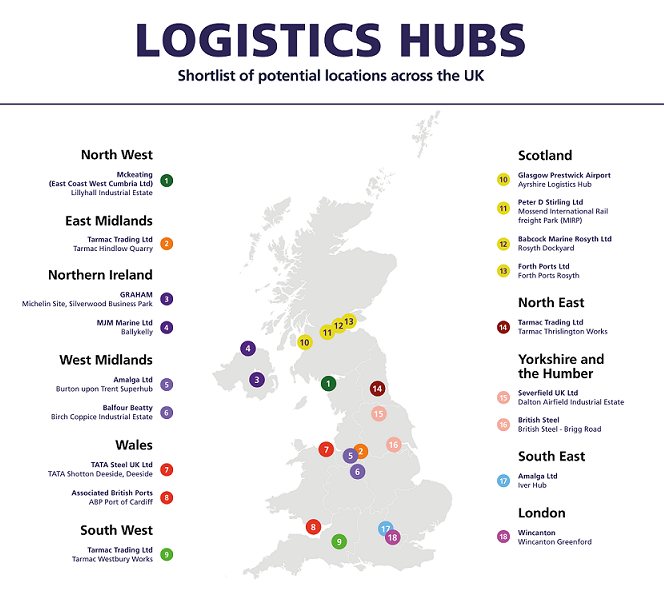 This innovative approach to construction being adopted by the UK’s busiest airport is hoped to make the project more affordable and sustainable by transporting assembled components in consolidated loads.

Emma Gilthorpe, Heathrow’s executive director for expansion, said the logistic hubs were crucial in the role they played in ensuring that the third runway delivered for every corner of the UK.

“Logistics hubs are also integral to harnessing the skills the UK needs post-Brexit,” she added. “We are working with other major infrastructure projects to see if they might also benefit from these hubs, creating a bright, new future for the UK’s construction sector. One in which we’re better utilising new technology and offsite techniques to spread the benefits of major projects like expansion nationwide.”

The next stage of the competition comes in the autumn when the shortlisted sites will have the opportunity to pitch to the airport’s bosses for their chance to become one of the final four construction centres.

Claire Walker, co-executive director at the British Chambers of Commerce (BCC), added: “A strong skills base and high-performing infrastructure network are vital to securing the UK’s economic future in the long-term. We are pleased that Heathrow is consulting with so many business communities from the Chamber of Commerce Network to ensure that its expansion plans can benefit the whole of the country.”