Sitting at a lofty 1,400m above sea level, nestled in the midst of the Trường Sơn Mountains and held up by the two “giant hands of Gods” is the latest striking structure to be designed by some of the world’s best architects.

The pedestrian walkway, entitled the Golden Bridge, emerges from the dense and spectacular greenery of the Ba Na Hills in Vietnam. Designed by TA Landscape Architecture in Ho Chi Minh City, the walkway offers tourists uninterrupted views of the breathtaking landscape beneath.

The 150m long bridge sits perched on the mountaintop and overlooks the forested scenery that Vietnam offers and is seemingly held up by two huge concrete hands that look like they’re coming out of the mountainside itself.

Opened in the summer, the structure is reportedly part of a $2bn project to accommodate tourists in the area. The Ba Na Hills resort is advertised as “the Da Lat of Danang province” by local tourism authorities and was founded in 1919 by French colonists.

The bridge has shot to fame for its quirky design and has encouraged more visitors to head to the lofty heights via the cable car station within the gardens. The 5.8km cable car track was once the world’s longest and highest but it’s the colossal hands under the walkway which have attracted the most attention with finer details in design even ensuring the hands look aged, giving the impression they have been sat there for years and years. 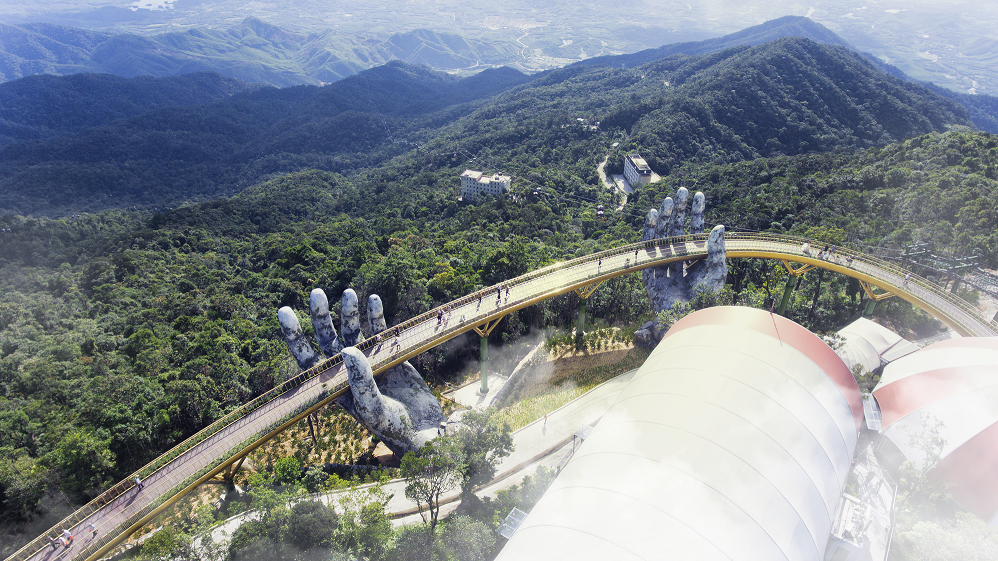 In the long run, the Golden Bridge functions as a highlight feature for Ba Na Hills Mountain Resorts, its symbolic image is believed to serve as a great tourism attraction not only in Da Nang city but the whole country as well. The bridge was designed to show the “giant hands of Gods, pulling a strip of gold out of the land,” said Vu Viet Anh, design principal at TA Landscape Architecture.

“The main concept of the Avatar Garden is to make a land of Gods. It creates a walkway in the sky, among the foggy and fairy-like lands of Ba Na Mountain. We proposed to have a pair of bridges for better connection and to champion the glorious views of the surrounding nature. One of them is the Golden Bridge, the second is the Silver Bridge, which is still under construction,” he said.

The pillars of the Golden Bridge have a painted exterior in harmony with the forest, adding to the feeling of walking in the air. The hands are supported by steel frame and fiberglass with a handlike structure and painted according to the design theme. The Ho Chi Minh company says while the Golden Bridge allows people to enjoy stunning views, it is also an important part of the upgraded line between the cable car station and Tiantai Garden within the mountainside.

Before the structure was built, traffic between two bridgeheads was difficult due to high deviation which meant a new connection for convenient travel was necessary, according to the design team. The bridge is located in the city of Da Nang, which is in the middle of the country by the infamous Hai Van Pass. While its purpose has been to link two cable cars stations, the 150m long pedestrian walkway is fast becoming the main attraction.

Despite only being open for a little under three months, views obtained from the walkway have led to plenty of social media posts showing off the spectacular scenery and the attention it has received over the summer has taken back the principal designer himself. Anh said: “The bridge is there because of its genius location. The site needed a walkway, hence why the Golden Bridge is born. We’re proud that our product has been shared by people all round the world but yes, we are surely surprised with the public attention to the bridge.” 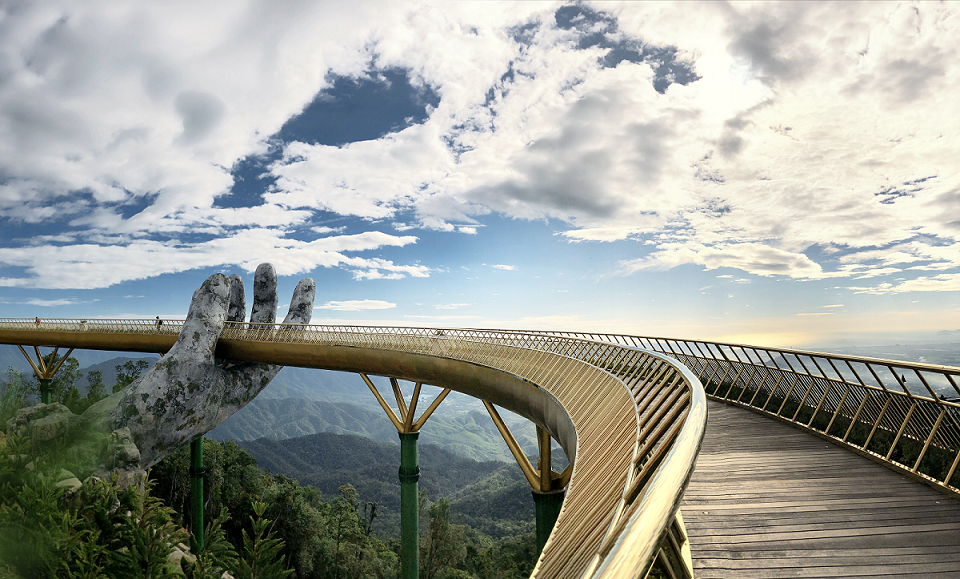 While the team involved at TA Landscape Architecture confirm they are “quite happy” with the final product, they do concede that it is “not as perfect” as they proposed. The vision for the bridge presented by Anh and his team was consequently built by The Sun Group, a property developer which has already built luxury resorts, a theme park and a cable car route within the country in the last two years. Those behind the design of the Golden Bridge told Infrastructure Intelligence that one of the most difficult challenges in the process was changing the Sun Group’s “mindset” in the designs they set out from the start. In an area of such outstanding beauty, the design team revealed that trying to convince its client that two gigantic hands should appear out of a hillside was not the easiest of challenges

Along with conquering the complex topography of the hilly area, the design process is said to have taken just over a year to complete. “At first, the client was quite concerned about this bridge,” Anh added. “It took months to persuade them of the final design, but the remarkable appearance of two huge grips looks like they drew the bridge out from the land and adore it as it were a gift from nature,” he said.

The developers behind the project have been described by some within the country as “gimmick merchants” but a spokesman for the company said the bridge fell into the group’s aim of creating “timeless, influential developments”.

Sun Group says their mission is to construct services in travel and entertainment sectors to not only to upgrade the tourism industry but to “put Vietnam on the world map” and to “improve the quality of life for Vietnamese people” by making the nation richer and more beautiful.

Another important aspect the architects had to take into consideration when implementing the design was how to build bridges without damaging and affecting the cliffs below. Anh credits the specialised software used in the process and the extensive experience of assembly techniques within the team in ensuring the aesthetics of the bridge and limiting construction problems encountered.

Every finer detail was considered within the year-long design process according to Anh. He says even the selection of golden stainless-steel handrails, the timber deck and the green bridge columns in the form of trees, were all chosen to give rise to a colour contrast.

Colour and materials used for the two God-like hands which the bridge centres on were carefully selected to create a lifelike appearance of an old ruin from the ground. The two eye-catching hands were deliberately embellished with cracks and moss finishing, according to the team. But despite the challenges faced, the principal designer believes the final product will be significant in the future as it increases the value of space around the mountain.

“The bridge will be a new destination for visitors, giving a great space to view the city of Da Nang as well as the Truong Son range on clear days,” Anh added. “The bridge is a great place for walkers and an exceptional observation deck where visitors can feast their eyes on the city. In the future, the Golden Bridge will be a prominent feature in the Ba Na tourist area. Its symbolic image is believed to serve a great tourism attraction not only in Da Nang city but in the whole country as well,” he said.