The government’s budget announcement about the setting up of a national infrastructure bank is a welcome and significant step forward, say Stuart McMillan and Victoria Allsopp of Burges Salmon.

Rishi Sunak’s budget will be one to remember for many reasons. The establishment of a national infrastructure bank (NIB) is not news as it has been trailed for quite some time. It is nevertheless heartening, to learn that not only is the government pressing ahead with this, it is also expecting to move quickly and is targeting the NIB being operational in its initial format by the end of spring. The bank will perform much of the role carried out by the European Investment Bank (EIB) prior to Brexit, with clear similarities to the UK’s successful Green Investment Bank experiment. This learning from its predecessors is very welcome, as is the government’s approach to the aims, funding and operation of the NIB.

Recognising the scale of the task at hand, the NIB will be developed in three phases – initially established on an ‘interim’ basis as part of HM Treasury, it will then be scaled up as its operations and strategy are fine-tuned, before being established as a statutory body, operationally independent from the government.  Notably, the long term and ‘permanent’ nature of the NIB is frequently referenced.  This will be important in allowing the NIB to take a long-term view of infrastructure investments and perhaps sets it apart from the Green Investment Bank, which was sold by the government to Macquarie in 2017.

The NIB will have a clear mission statement, declaring that it will “partner with the private sector and local government to increase infrastructure investment to help tackle climate change and promote economic growth across the regions and nationals of the United Kingdom”.

The NIB’s main policy objectives are to target climate change, contributing to meeting the government’s net zero targets by 2050 and to support regional and local economic growth through better connectivity, opportunities for new jobs and higher levels of productivity.

It is interesting that the NIB’s mission is, currently, restricted to economic infrastructure and not to the delivery of social infrastructure such as hospitals, schools and the like. Perhaps this addresses one of the main criticisms of the EIB - that it funded too many deals which did not require its involvement, thus squeezing out other funders in an already liquid market. Emphasising this point, the government has stipulated that the NIB should operate under the principle of ‘additionality’. This means that the NIB should be targeting its investments where either the size of the project or the nature of the technology means that the market would not support the project without intervention and the NIB support will be expected to ‘crowd in’ other investors.

The NIB will also be an important part in supporting the government’s ‘levelling up’ agenda and is expected to spread investments across the UK to combat the perception that too much investment is focused on London and the south east of England. The decision to headquarter the NIB in Leeds (city centre pictured below) underlines this commitment, as does the emphasis on the role of local authorities in achieving the NIB’s targets. There is a clear intent for the NIB to provide not only financial support, but also advice, expertise and support to local authorities involved in infrastructure projects. Sharing best practice and knowledge across regions will also play an important role in “bringing together local actors for collaborative projects and aggregating projects together where appropriate”. 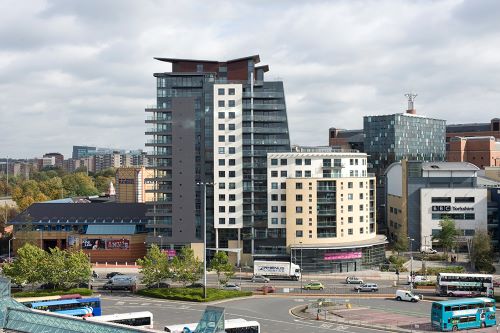 On a wider geographical perspective, the NIB is mandated to fund projects throughout the UK. One of its priorities will be to build relationships with the devolved administrations, which have already established a national investment bank for Scotland and the Development Bank of Wales. The government also intends to legislate to ensure that the NIB is able to lend to the Northern Ireland Executive (which is responsible for most infrastructure projects within the NIB’s remit). Cross border collaboration between these institutions will be good news to any project seeking investment across the UK.

Another welcome aspect of the NIB is the government’s intention for it to develop relationships with a wider pool of financial stakeholders than the current direct investors in the UK infrastructure market.  These will include pension funds and institutional investors. Attracting more of this money into the UK market has long been a government aim, although it has to be said that a number of the infrastructure funds already do this indirectly. Whether the NIB will be able to fulfil this role remains to be seen, but it is good to see this as part of its mandate.

As you would expect, the NIB will have significant resources to invest and lend, including £12bn of capital, £5bn of Treasury equity as further supplemented by its ability to borrow up to £7bn from government and private markets (although this will be subject to a best value for money test). It will have a number of levers at its disposal and tools to assist its targeted investment. These will include the provisions of senior debt, mezzanine debt, equity and guarantees.

Significantly, the NIB will be taking over the UK government’s guarantee scheme which has previously been successful in attracting investment into deals such as the Mersey Gateway Crossing.

It is still early days with the NIB is just starting to recruit staff. As mentioned above, the intention is for it to operate on an ‘interim’ basis in the short term. Perhaps not unexpectedly, this means that there is little information at this stage in terms of the exact parameters around the bank’s governance, investment principles, credit policies etc.

The 12-week Perspectives on Infrastructure series ran by Burges Salmon over the summer consistently identified the market’s desire for stable, long term and clear policy to support infrastructure investment. As such it will be important to ensure that the NIB develops robust, forward-thinking and clear policies and criteria in the short to medium term. This will ensure that when the time comes for the NIB to be constituted on a statutory basis, these aspects are engrained in its policy and decision making respecting the feedback from the market participants.

The NIB is a welcome addition to the UK infrastructure landscape. Last week’s announcement shows real ambition for the institution, both in terms of its resourcing and ability to raise funds as well as in its remit. There are still many unanswered questions, particularly around about the operational aspects of the bank, although that was always going to be the case. As always, any institution such as this is only as good as the pipeline of deals that are available to it and hopefully these two things can now progress in tandem so that the UK can establish a world class climate for infrastructure users and investors.

Stuart McMillan is a partner and Victoria Allsopp a director in the infrastructure finance team at independent UK law firm Burges Salmon.