A big data advisor to former US president Barack Obama has warned that companies who fail to embrace the digital revolution will cease to exist. Andy Walker and Rob O’Connor report from the FIDIC conference in Mexico City.

A former presidential advisor to Barack Obama made a huge impact at the FIDIC International Infrastructure Conference in Mexico City, when he said that companies who fail to embrace the digital revolution will cease to exist.

Keynote conference speaker Stephen Brobst said: “There are three choices in the new economy. Companies are either (1) already data companies (2) will become data companies or (3) will cease to exist. So make your choices! You may not know it, but you are all data companies,” he said.

An advisor to former US president Barack Obama on big data and now the chief technology officer for the multi-billion dollar Teradata Corporation, Brobst is well-placed to outline the challenges and, more importantly, the huge opportunities presented by leadership, new technology and digital transformation to the industry.

Brobst said that computing was being made smaller, more efficient and more deployable. “The phone in your pocket is a super-computer. It’s more powerful and has more devices that put a man on the moon in the 1960s. You have a personal super-computer in your pocket,” he said.

Looking positively to the future and outlining how the industry can take advantage of digital transformation, Brobst said: “People talk about the internet of things but I don’t use that term. What we have is the internet of everything! Super technology sensor data can now be supplied for less than the cost of a jellybean. Sensor technology will change everything,” he said. 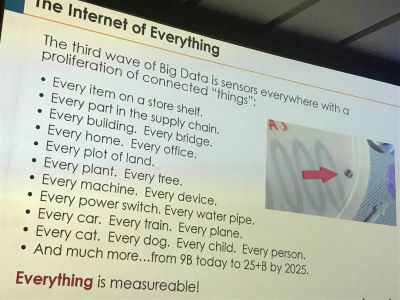 Brobst described the internet of everything (IoE) as a third wave of big data that would have sensors everywhere and would impact every area of the industry and that of society itself. As far as infrastructure was concerned, Brobst said that the IoE would connect and monitor the effectiveness of everything including every plot of land, every building, every bridge, every office, every machine, every power switch, every water pipe, every car, every train, every train and much more besides.

Brobst said that this means that "infrastructure will be able to self-measure and monitor usage characteristics, environmental conditions, and performance, so as to provide critical data to manufacturers, service organisations and customers alike."

The industry may have heard bold statements like Brobst’s before and some conservative attitudes in the industry can assume things can just carry on as before. However, Brobst thinks this is definitely a very different moment in time and one that the industry cannot afford to ignore.

Brobst pointed out that the issue wasn’t about engineers becoming software experts, but that engineers need to be comfortable using the tools to help them become smarter, more efficient and become better decision makers on the engineering decisions they are making. But that doesn’t necessarily mean a wholesale change in the industry’s age demographic, said Brobst. An ability and a willingness to adapt to new technology was more important than age, he claimed.

“People that are comfortable with digital technologies and using applications tend to be natural learners. When I hire someone I don’t hire skill sets, I hire people who are inherently curious and have an appetite to learn, and these can be older or younger people. You want to hire people who are open to evolution, open to learning and who are open to change regardless of their age,” said Brobst. 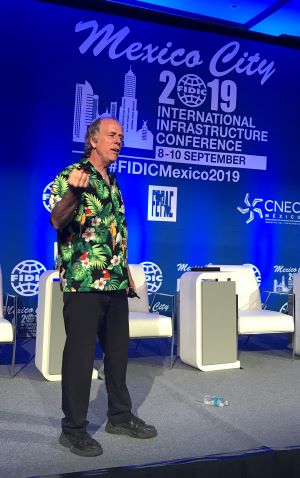 Highlighting the vital importance of experience, Brobst said: “Engineers who’ve been around for a while have seen a lot of things and already been through change. They're the survivors, if you will, and if you lose them you lose a lot of the experience of ‘we’ve tried that and here’s what we learned from that'. If you get a whole bunch of newbie engineers, they’re going to make the same mistakes the experienced guys have already made, so you don’t want to lose that experience," said Brobst.

Brobst confidently concluded that the competitive landscape will change beyond all recognition and that those companies and organisations both willing and able to adapt to that change would be best placed to benefit form the huge opportunities of the current and future digital transformation.