The environment, long-term planning, communities, and adapting to new ways of working all took centre stage at the latest Coming Out of Covid webinar on Friday 12 June, writes Rob O’Connor.

Guarding against the next time – making the industry resilient was the third in Infrastructure Intelligence’s series of free weekly Friday webinars and explored how the construction and infrastructure sector - and the firms that work within it - can build resilience in the face of future crises.

Fast forward to the present day and he said the industry had showed signs of the agility needed to respond to a crisis, and that long-term emotional and leadership investment in people was just as important as other physical and capital investment.

Ramboll’s Mathew Riley also looked to the longer term, saying that long-term human values and beliefs should hold firm in the face of short-term crisis and the industry had shown it could adapt to new ways of working. He outlined payment, leadership and industry collaboration as three of the major positives to have emerged from the current crisis.

“The industry’s payment record is the best it’s ever been,” he said. “The industry has recognised the need for money to flow as quickly as possible.” Paying tribute to the CLC, he said it was the first time he could remember the industry speaking effectively with one voice, displaying exactly the type of clear leadership required when dealing with government and other major decision makers.

Looking further ahead, he pointed out that industry collaboration and information sharing has been excellent, something that needed to continue in the months and years ahead. “The industry has fantastic knowledge and ability,” he said. “We need to establish a way for that knowledge and ability to be shared.

“I wouldn’t exactly advocate a crisis every year,” he added. “But in terms of adapting how we work, we’ve achieved more in the last three months than in the previous 18 months put together. That asks the question - why would we go back to the old way of working?” 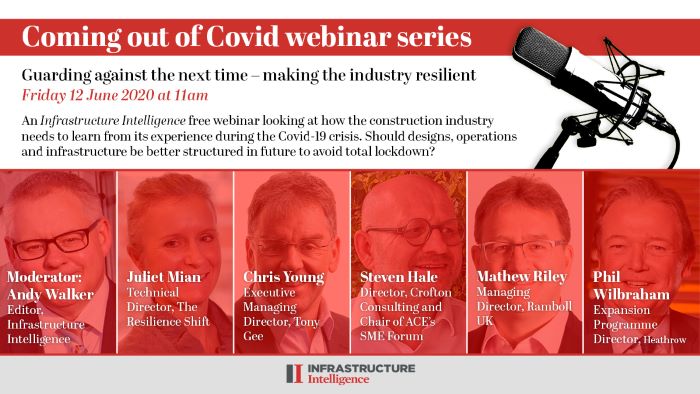 Juliet Mian of The Resilience Shift said that existing infrastructure in a range of key areas including water, the food supply chain, transport and energy had coped remarkably well in a clearly unprecedented time, but the industry couldn’t be complacent.

Describing the industry response to the pandemic as an opportunity to do things differently, and that going “back to normal” was not an option, she outlined how society and communities rely on resilient local infrastructure – and that the sustainability and net zero should be at the heart of the industry’s future transformation.

Heathrow’s Phil Wilbraham described how the airport had been “caught up in the eye of the storm” with passenger numbers down to around 2% of average figures. Looking ahead, he was confident that the airport would adapt and change and, as public perceptions around public transport change over time, he said that Heathrow still believes a third runway will be required to meet future demand.

He also announced that Heathrow’s construction projects will restart on 15 June and, asked what kind of infrastructure will be needed in future, highlighted modular and offsite construction as increasingly important – describing it as a massive opportunity for the construction industry to help achieve the sustainability vital for communities and society.

Steven Hale of Crofton Consulting argued that the future shape and structure of the industry would need to change to incorporate new ways of working. He said that although offsite construction was one of the answers it still needed to improve, adding that semi-automated and robotic solutions should not be overlooked in future planning and investment.

Looking ahead, he said: “We’ve been able to adapt quickly, and that’s great. We also need to focus on our people and their mental well-being.”

Andy Walker, Infrastructure Intelligence editor, said: “Resilience is not just about emerging out of the current crisis intact, but very much about looking stronger for the long-term. It was surely no coincidence that all our speakers today highlighted the vital importance both of net zero and changing the way we work as being right at the heart of industry policy moving forward. It’s a huge challenge, but also a great opportunity to build a sustainable future for the industry and the communities and society we serve.”

The next free webinar in the series, “Changing business models in a post-virus world”, is on Friday 19 June at 11am.

Click here to book your free place on "Changing business models in a post-virus world".

Data is the oxygen for any business

Report on our special business webinar, organised with Atkins, on the importance of data and its key role in constructio…

Spatial plans – the key to ‘levelling up’

Spatial plans are the key to ‘levelling up’ and unlocking the wealth of England’s regions, says a new report.