New analysis by the Association for Consultancy and Engineering (ACE) reveals that nearly two fifths (39%) of the receipts from a levy on property developers meant for local infrastructure improvements remains unspent by councils in England and Wales.

The Community Infrastructure Levy (CIL) was introduced in 2010 to help local councils secure the revenue needed to meet the impact of new property developments, for example improving local transport links or helping to build new schools or GP surgeries.

Freedom of information requests undertaken by ACE show that despite raising more than £1.1bn for councils across England and Wales between 2014 and July 2018, £431m remains unspent and is currently sitting in council bank accounts. ACE’s research also shows that across the board, take-up of the levy remains poor, with only 43% of councils in England and Wales (149 out of 348) choosing to implement it.

A new ACE report, Scrapping the Levy, also highlights a number of regional disparities. More than two-fifths (43%) of unspent CIL is with councils in Greater London, while Birmingham and Newcastle have, to date, not spent any of the collected levy. 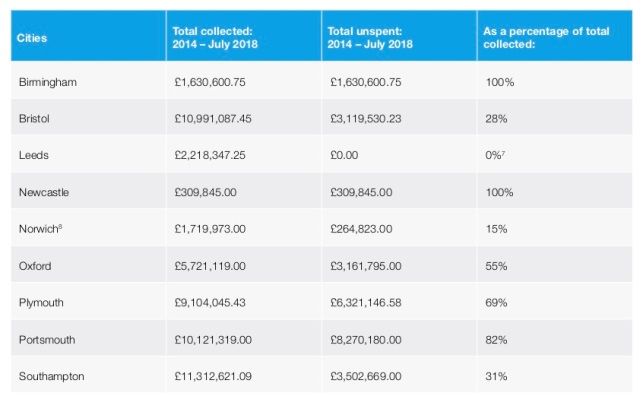 Commenting on the findings, ACE chief executive, Hannah Vickers, said: “While councils are deciding not to implement the levy, or sitting on the funds raised, local infrastructure is bearing the brunt of increased strain whenever new homes or retail developments are green-lit. This means more cars on our local roads, more pupils in our crowded schools and longer waiting lists at the GP. Given the current financial demands on councils this is surprising state of affairs.

“It’s clear that the original intention of the levy as a means of fairly raising money for supporting infrastructure is failing. The upcoming budget is an opportunity for the government to address this imbalance and put in place a system which is simple and transparent. At the moment the system is failing old and new residents alike.”

The January/February 2022 digital edition of the Infrastructure Intelligence magazine is now available for download.