CONFIDENCE, CERTAINTY AND REDUCING RISK ARE VITAL IN FUTURE PLANNING

Infrastructure Intelligence has hosted a panel debate on how the planning system can help deliver the economic infrastructure element of the government's "build, build, build" agenda.

Rebuilding business confidence, creating certainty and reducing risk emerged as major talking points during the online debate, which took place on the same day as housing secretary Robert Jenrick outlined the government’s plans for a radical overhaul of the planning system to deliver the high-quality, sustainable homes communities need.

Ministers say the landmark changes outlined in a consultation paper, Planning for the Future, are necessary to transform a system that has long been criticised for being too sluggish in providing housing for those who need them and too ineffectual in obligating developers to properly fund the infrastructure - such as schools, roads and GP surgeries -  to support local development.

The debate, “How can planning help deliver the ‘build, build, build’ infrastructure agenda?” was hosted by Infrastructure Intelligence editor Andy Walker and assembled a knowledgeable panel who brought an insightful and authoritative range of views to the table.

Outlining the scale of the planning challenge, Daniel Moylan said that much of the government’s planned reforms relate to the pressing need for the more rapid delivery of new buildings and adaptations needed at a time of unprecedented and unpredictable transformation, but that infrastructure delivery also needed to happen at the scale and pace needed to match the government’s clearly stated ambitions.

“Crucial to that is certainty,” said Moylan. “Developers and promoters, in public and private sector alike, need certainty in three things: policy support, time, and the flexibility to react to market and commercial changes, he said. “The Planning Act 2008 attempted to provide these certainties for nationally significant infrastructure projects (NSPs), but this has started to fall away as political, economic and climate change realities have affected the regime,” said Moylan, who described stakeholder resourcing, judicial reviews and delays in decision-making as three key problems to address.

“The budgets of statutory agencies including the Environment Agency and local authorities have been cut to an extent that many of them are unable to resource dealing with consultations properly,” he said.

Although a campaigner against a third runway at Heathrow, Moylan also highlighted the negative role that judicial reviews can have on potential projects. “The delay caused by getting a judicial review disposed of can cause a big impact to a project. Heathrow lost a project it had invested in because the judges took the view that the government had made a legal error over which the airport had no say. That will be a warning flag to investors domestically and internationally about the capriciousness of our procedures,” he said.

“The cost of delivering infrastructure is notoriously high by international comparisons,” said Moylan. “To what extent does the current planning process contribute to that? There is too much risk in the system at the moment, and that needs to be brought down,” Moylan said. 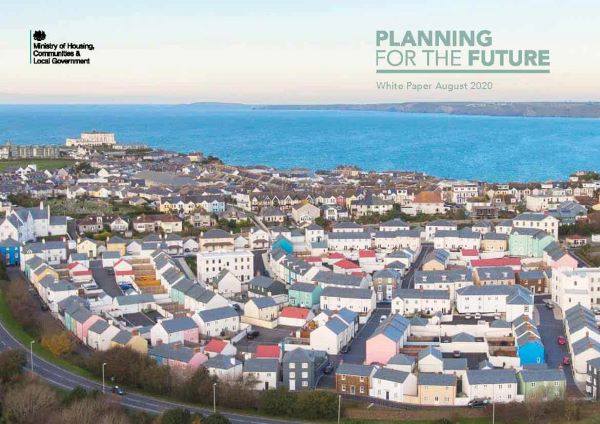 Expanding on the theme of uncertainty in the business community raised by Moylan, Shaun Spiers highlighted that uncertainty was also an important issue for local communities and that, even under the new proposals, certainty was extremely hard to achieve.

“A major concern about the new proposals is that you can’t really simplify complex decisions about issues that people and communities care deeply about,” said Spiers who also emphasised the need to invest in green infrastructure, saying that the UK was “massively off-target” of achieving net-zero by 2050.

“There’s an annual £14bn investment gap in the infrastructure we need to achieve net-zero,” said Spiers. “We need to think ‘nature, nature, nature’ rather than just simply ‘build build, build,” he said.

Robbie Owen outlined how a coherent National Policy Statement (NPS), properly resourced stakeholders, more efficient decision-making and infrastructure delivery were all vital considerations in any new planning shake-up. “It’s absolutely critical that the government gets a grip on this and modernises the National Policy Statement and focuses on how we build back better and greener,” said Owen.

“Properly resourced stakeholders at all stages are also critical – there should be no excuse for not properly resourcing authorities to make decisions speedily within clear timescales. We need to emphasise flexibility to help reduce burdens on investment, and we also need to reform and empower regional development corporations – they have an important role to play in infrastructure delivery.” he said.

Hannah Vickers highlighted the short-term challenges faced by the industry due the ongoing pandemic, including 690,000 construction jobs being at risk this year, but stressed the importance of not losing sight of strong long-term goals. Describing the ongoing work of the Construction Leadership Council as a great opportunity to positively influence the government, Vickers said: “Planning is a key component in any future recovery, but more needs to be done. We’ve had ‘build, build, build’, but we should add ‘faster, better, greener’ to that – a fundamentally different set of proposals which we shouldn’t lose sight of,” she said.

Vickers also stressed that building business confidence was critical for future investment, especially in skills and innovation. “The industry needs to invest in skills and future training, developing capability for the next 15 years and beyond, while also investing in innovation and infrastructure for the long-term benefit of the economy and society. We won’t get any of that if the government doesn’t invest in infrastructure,” she said.

Infrastructure Intelligence editor Andy Walker said: “The government’s planning white paper was never going to address large-scale infrastructure challenges and strategy as it concentrates on housing and the local infrastructure development linked to that, however the big picture needs looking at. It is clear that the government is in radical change mode on planning issues and there is now a real opportunity for the industry to press its case for reforming the wider strategic planning agenda around National Policy Statements and National Strategic Infrastructure Projects.