Following Storm Desmond in 2015, Cumbria faced a herculean task to rebuild its shattered infrastructure. Mott MacDonald joined forces with the county council to plan and deliver a recovery programme with the community at its heart, writes Ian Rowley.

The reopening of Pooley Bridge marked a significant milestone in Cumbria’s recovery from Storm Desmond, a one in 200-year flood event that will forever be etched in the memories of local people.

The storm brought unprecedented rainfall to the north west of England in December 2015. Cumbria bore the brunt. In just 48 hours, the county was deluged with 1.15 trillion litres of rainfall, enough to fill Wembley Stadium 290 times over.

Almost 8,000 homes were flooded and 300km of roads and nearly 800 bridges were damaged or destroyed. Several stone-built river crossings, some of which had stood for hundreds of years, were swept away – including the original Pooley Bridge.

While working on the concept design for its replacement, the project team came to appreciate how it provided more than vital connectivity – it was also the keystone of the area and the residents were emotionally attached to it.

Bridges are landmarks that define the identity of communities, towns and cities. They often invoke a sense of civic pride among the people who live there. This is why it was important that this relationship between people and infrastructure informed the final design for a modern, resilient bridge in keeping with the community’s sense of identity.

As programme manager, we worked closely with the supply chain – Knight Architects, who developed the concept design for the new crossing working with the community on the engagement process and the contractor Eric Wright Civil Engineering and its designer GHD – to ensure residents were carefully consulted and that their views were integral to the design process for the replacement crossing.

A people-focused approach to planning, design and project management was a hallmark of the Infrastructure Recovery Programme (IRP), which involved more than 1,200 individual works, ranging from patch repairs to full reconstruction of highways, slopes, retaining walls and structures, culverts and bridges.

The 36-strong IRP team, split between Mott MacDonald and Cumbria County Council, worked as one seamless unit. The team combined the county council’s intimate knowledge of its assets, communities and stakeholders with Mott MacDonald’s rigour and fresh thinking on programme management and project delivery.

The county council also played an ‘intelligent client’ role, providing strong leadership, not only in the command-and-control sense, but in terms of ensuring the behaviours of everybody in the team were aligned with delivering the programme’s outcomes.

In the storm’s aftermath, businesses and livelihoods were severely affected and there was an urgent need to restore vital road links, reconnect cut-off communities and get the county moving again as fast as possible. The planning and prioritisation of bridge repairs took into account the socio-economic impact on towns and villages left isolated by the loss of transport links.

The closure of one bridge in the south of the county only affected the residents of 12 remote properties. But the loss of the crossing had such an adverse effect on this rural community that repairing it was deemed a priority along with busier routes.

The scale and urgency of the programme meant there was no place for traditional contracting and procurement methods. We drew up a blueprint for working with the local supply chain which would move us away from a conventional client-supplier transactional relationship to a more collaborative one based on common goals and aligned behaviours.

Keeping the supply chain local helped win over hearts and minds – and delivered significant economic outcomes. More than 70% of contracts were awarded to Cumbrian suppliers, providing a valuable boost to the county’s economy and creating nearly 400 jobs.

We devised a contracting strategy based predominantly on design and build, and the NEC3 suite of contracts. The core principle of NEC contracts is that collaboration is the key to successful project delivery.

The design and build approach was a new way of working for some members of the supply chain who had only previously worked as subcontractors to main contractors. They were asked to manage the design because it would unlock opportunities for them to get involved in projects at an early stage, reducing the risk of overengineering, and promote the collaborative spirit which was such an important element of the IRP.

This ethos helped build a ‘delivery community’ that not just worked together but learned together. Regular supply chain events and workshops were used to share learning, innovation and best practice. The IRP distinguished itself as a model of collaboration across the supply chain and Mott MacDonald has widely shared the knowledge gained from this unique design and construction process, including with universities in Europe. 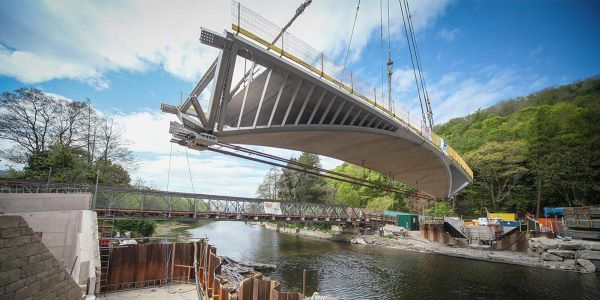 Under the IRP, essential infrastructure, vital to the economic and social wellbeing of the county’s mostly rural communities, was restored and returned to service quickly and cost-effectively.

The emergency funding Cumbria received from the UK government was essentially to cover the cost of like-for-like replacements. But where possible, opportunities were taken to improve the long-term-resilience of bridges and introduce flood alleviation measures.

In the words of Angela Jones, executive director at Cumbria County Council: “The Infrastructure Recovery Programme would have taken at least five years instead of four if we had not brought Mott MacDonald on board. Their experts devised the contracting strategy which enabled us to get repair works started quickly while still meeting our financial due diligence requirements. This strategy will be one of the programme’s lasting legacies, along with an upskilled local supply chain with which we have established an intrinsic level of trust and co-operation.

“The IRP will also serve as a model for rigorous, collaborative and cost-effective project management across the whole of the council. We are a better, more capable authority as a result of the programme, which has improved the resilience of Cumbria to withstand and recover from future extreme weather events.”

At Mott MacDonald, our purpose is to improve society by considering social outcomes in everything we do. Our clients, too, are increasingly aware of the need for infrastructure to be inclusive and are paying closer attention to the views of local communities as well as customers and end-users.

But projects will fail to deliver positive social outcomes if they are only an afterthought. It is only by engaging with residents and stakeholders – from the outset, and in a meaningful way – that we can align designs with their needs and aspirations.

Extensive engagement with the local community was key to the success of the new Pooley Bridge, the first stainless steel road bridge in the UK and a flagship project of the IRP.

There was open dialogue about the technical and financial constraints and the different options. There was unanimous support for final design because we empowered the community and responded to their concerns and priorities.

We created a bridge that not just increases the community’s resilience, but a structure I believe the community will grow to love again.

Ian Rowley is a project principal at Mott MacDonald.