Being the 1980s government minister who first convinced Margaret Thatcher that climate change was an absolutely vital issue would usually count as a significant achievement alone. But Lord Deben has continued to champion the environment and the hugely influential chairman of the Climate Change Committee (CCC) is delighted that, after the US presidential election, America has now “rejoined the world” in the fight to achieve net zero.

Interviewed online by Infrastructure Intelligence editor Andy Walker on 11 November 2020, an event organised in association with strategic partner BECG, it was clear that Lord Deben’s passion, knowledge and enthusiasm for the environment continues to shine as brightly today as it ever did.

He has consistently championed an identity between environmental concerns and business sense and to that end, he set up and now runs Sancroft, a corporate responsibility consultancy working with blue-chip companies around the world on environmental, social and ethical issues.

Lord Deben clearly has wide experience and knowledge of government and how the system works, but what made him want to get involved in tackling climate change?

“It was literally the science,” he said. “I began reading about it when I was at the ministry of agriculture and became convinced that the climate was changing. In terms of influence, we were lucky that Margaret Thatcher was a scientist and she quickly became convinced. We were fortunate to have a scientist as prime minister. She said to me: ‘There are two people in this government who believe in climate change. You and me. Therefore, we have a majority.’” 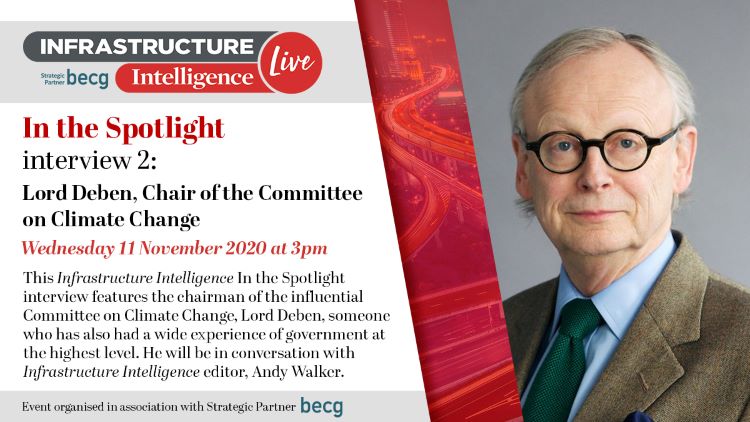 Lord Deben has worked with many prime ministers since the 1980s and credited David Cameron for his environmental aspirations. “David Cameron was crucially important, both in opposition and as PM. We have to give him real credit, although he didn’t pursue zero carbon homes. Theresa May made sure net zero was enshrined in law and Tony Blair and Gordon Brown pushed legislation. The big failure was that people have been too slow. However, if Boris Johnson does what he says on net zero, he may well be the one who makes this succeed,” he said.

Turning to the present day and the UK government is following a legally binding policy of achieving net zero by 2050. But is this target good enough or fast enough?

Lord Deben said the government needed to create a level playing field for the industry to step up to the plate, but also called on the industry to speak with one clear voice in bringing climate change solutions to the table.

“Industry needs regulations from government, the sort of regulation that means it’s fair to compete properly on a level playing field,” he said. “Procurement policy also needs to be absolutely in tune with the government’s commitment to fighting climate change. That should mean you don’t get the job if you’re not meeting the net zero challenge.

“That said, the industry should be much more vocal and united. It’s traditionally never quite been securely single-minded with one voice. It should argue its points internally and then speak with one voice,” he urged.

Lord Deben also praised the government’s newly flagged policy on wind power but was highly critical of housebuilders. He said: “Wind policy gives real security to the industry. It’s good for the economy in Scotland and the north, but a good deal of work is also being done in the Irish Sea, so the work is spread well. Improved energy efficiency and new sources of heating in homes will also mean a huge programme of retrofitting, which will be good news for jobs.

“Looking ahead, with retrofitting, everyone knows we need to change the way our houses are built. And some housebuilders should be ashamed of themselves, building for today rather than tomorrow,” he said.

But for all the UK’s 2050 net zero aspirations, it is obvious that a concerted global effort is vital to save the planet from climate change – with America’s intention to rejoin the Paris Agreement and the clear commitments needed from COP26 all highlighted as crucial by Lord Deben.

Welcoming the US presidential election result, he said: “It’s hugely important. America has rejoined the world. Trump was virtually a lone voice and he either wouldn’t or didn’t want to realise that growing numbers of US companies are adapting to climate change, and Joe Biden can carry that baton.”

Describing his hopes for COP26, Lord Deben said: “We need nations to commit to significant net zero improvement. It’s a great pity we’re not part of the European Union. It’s very damaging to leave the EU, but there it is. It looks like the US is going to rejoin the global voice, so it’s up to us to play our part very strongly.

“I also hope we’ll commit ourselves and deliver the money for developing countries to play their part. We have grown rich from creating our own pollution, so we’ve really got to show COP26 that we’re going to deliver on our promises to find a solution. We have a moral and practical imperative for doing it.”

Click here to watch a recording of the interview with Lord Deben.